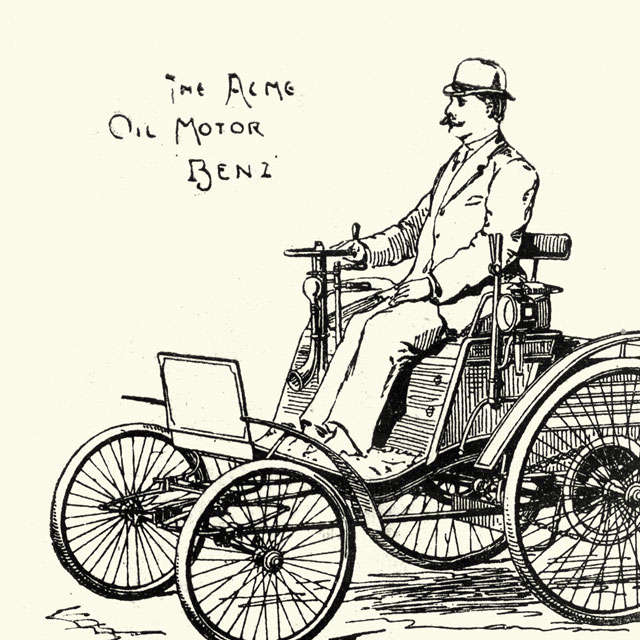 Back to the Feature: The Evolution of Car Design and Functionality

Self-driving cars may sound futuristic now…but we predict that in a matter of years, they’ll seem as old hat as car radios.

That’s because while automobiles have functioned similarly throughout our lifetimes, the features included (from safety essentials to fancy-pants bells and whistles) have dramatically evolved over the past centuries. Take a peek at some of the historical eras and standout trends—plus a glimpse at what’s to come.

Our vision of cars continues to evolve: Jules Verne’s 1880 novel “The Steam House,” for example, depicts a fictional steam-powered vehicle in the shape of an elephant.

Horsepower may have been the reigning power for centuries, but in the late 18th century, steam-powered, self-propelled vehicles—large enough to transport people and cargo (sound familiar?)—hit the streets.

In 1770/71, French inventor Nicolas-Joseph Cugnot developed an experimental steam-driven artillery tractor (OK, that doesn’t sound quite as familiar—but it counts!), and in 1784, Scottish engineer and inventor William Murdoch built a working model of a steam carriage in Great Britain. And in 1789, the first automobile patent in the U.S. was granted to inventor, engineer, and businessman Oliver Evans.

German inventor Karl Benz brought us the first modern automobile with his invention of the Benz Patent-Motorwagen.

Come 1806, the first cars powered by an internal combustion engine (and running on fuel gas) made their debut.

In the decades to follow, innovations such as hand brakes, multi-speed transmissions, and better steering emerged. However, progress wasn’t on cruise control. Backlash towards these large, fast, motor machines led to the Locomotive Act in 1865, which required that self-propelled vehicles on public roads (in the UK, at least) had to be preceded by a man on foot, who would wave a red flag and blow a horn. Talk about making an entrance…

Towards the end of the 19th century, the world saw the introduction of the modern gasoline/petro-fueled internal combustion engine in 1885. At long last, in 1886—regarded as the year of the birth of the automobile—German inventor Karl Benz unveiled the Benz Patent-Motorwagen. (The concept of German engineering ain’t a trope for nothin’!)

Bit by bit, motorized wagons replaced animal-drawn carriages—especially after the more affordable (and legendary) Ford Model T was introduced in 1908.

Considered the Edwardian (Brass) Era, these years were the heyday for high-wheel motor buggies, and the beginning of all-steel bodies. The aforementioned Ford Model T was the most widely produced and available 4-seater until 1927, and utilized the now-given pedal-based control system. In 1910, the Mercer Raceabout hit the road as one of the very first sports cars, and the Bugatti Type 13 from 1910-20 was an enviable racing/touring model with advanced engineering and design.

Here are several other greatest hits from the first half of that ever-innovating century:

1925: Cigarette lighters are a perfect match (replacement) for in-cabin smokers—and now serve as an outlet for our modern-day electronics.

Over the next several decades, the world saw the arrival (and progressive development) of racing cars, luxury vehicles, mass-production, engine advancements, aerodynamic enhancements, fuel efficiencies, computer-assisted designs, and car types aplenty. From the Vintage Era to the Pre-WWII era, and then the Post-war era to modern times, here’s a closer look at some throwback (and not so throwback) details from the latter part of the last century.

1956: Power steering becomes a common feature, empowering drivers to make turns with the help of hydraulics.

1965: 8-track players serve up another listening option for those who like some music with their motion. (AKA everyone, ever.)

1973:  The catalytic converter scrubs tailpipe emissions and helps cars clean up their act.

1994: On-board diagnostics (the 16-pin connector that garage mechanics use as a resource for vehicle status and condition) start popping up with increased frequency.

From AI integration to flights of fancy, the future of car technology will be one wild ride.

From small comforts to big precautions, the car features in this century are sure to have absolutely blown the minds of the earliest vehicle pioneers. So buckle up (thanks to seat belts, first developed in the mid-19th century)—it’s gonna be a crazy ride.