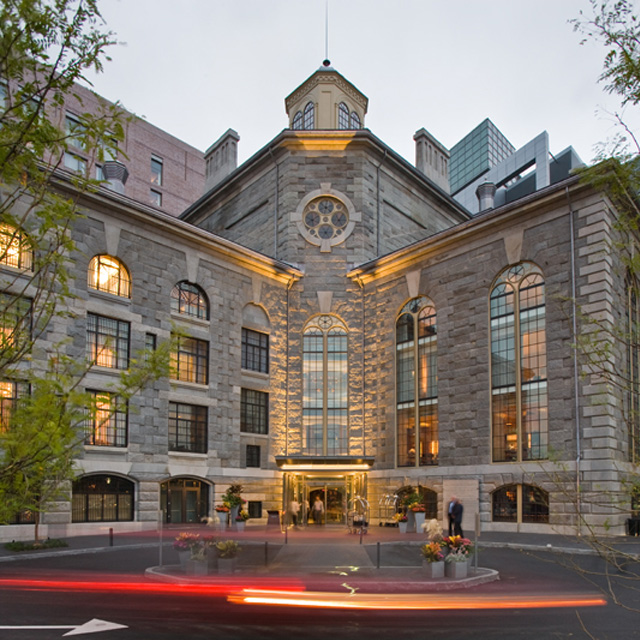 From 1851-1990, if you were being held before trial in Boston, it was very possible you stayed at the Charles Street Jail. Complete with wings for both male and female inmates, it once held the likes of Malcolm X, along with several other famous lawbreakers.

Now this former jailhouse smells of lilies softly wafting through the women’s restroom at the reimagined Liberty Hotel. (This, among other things, makes it especially hard to believe that you’re in a 139-year-old jail cell.) The popular hotel is a transformative example of urban adaptive reuse: reworking neglected city spaces into dynamic, modern ones.

A drawing of how The Charles Street Jail looked when it was designed in 1848 by Gridley Bryant. Photos courtesy of The Liberty Hotel.

If you’re a little spooked at the thought of sleeping in a former jail cell, you’re not alone. That’s why the developer had Buddhist monks cleanse the space before the hotel opened. According to Liberty Hotel General Manager, Rachel Moniz, “That puts people’s minds at ease right away.”

What other interesting stories did we unlock? Keep reading to find out.

Zipcar: Who had the vision to turn a prison into a hotel?

Rachel: Dick Friedman, the developer of the hotel, is a Bostonian who would walk by as a kid and see this big wall around this building, and he just knew it was a bad place. When it [the Charles Street Jail] closed around 1990 due to the building being condemned for inhumane living conditions…the building just sat here, until he [Dick] partnered with Gary Johnson of Cambridge 7 Associates, who ultimately became the architect. They had seen the building and knew what they wanted to do from the very beginning. It’s very inspiring to look at this condemned building and imagine turning it into what it is today.

Was it difficult to sell the idea to the City of Boston?

No, this area was undergoing a bit of a renaissance. This end of Charles Street wasn’t as desirable. It was clearly a beautiful building — something had to be done with it. They realized [restoring it] would help with so many things. It would help patients and patients’ families at Mass General Hospital, who could stay on the campus of MGH. It’s also close to one of the treasures of Boston, the beautiful Charles River and Esplanade. One of the things they were most concerned about was the historic integrity of the building, and that was kept intact.

These original prison bars and jail cells (and even a lock and key) have been preserved.

Which parts of the historic structure have been maintained?

There are the jail bars in the two restaurants in the hotel called CLINK. and Alibi, the cell doors by the historic exhibit, the wrought iron railing on the catwalks are the original railing, though the catwalks themselves [where prison guards would monitor the prisoners] had to be bumped way out — probably double in size to meet the required codes for today.

One of the things to keep in mind about this project: There were 10 inches of white paint over all of the exposed brick you see today. That had to be painstakingly chipped through, the brick had to be removed to get it completely removed of paint, and then that brick was put back in its original place. This was such a labor of love. The project itself cost about $150 million, and $25 million was given back in historic tax credits because that type of work was done.

Left: The Charles Street Jail, condemned in the 1970’s. (Photo: Library of Congress.) Right: The jail’s central atrium was beautifully resurrected and forms the core of the hotel.

Was it worth it to preserve the character and history of Boston?

Yes. It’s a national historic landmark. Everything about this building is indigenous, even the granite on the outside is from Quincy, so they wanted to maintain the physical structure and at the same time create a space that everybody wanted to be in. There is something about the space that draws people in.

We love how you guys are so tongue-in-cheek with the names: Liberty, CLINK., Alibi. What were some names you brainstormed, but didn’t use?

Bread & Water was a restaurant name that was thrown around (and quickly thrown out!). You have to be careful. You want to give a nod to the fact that this was a jail, but you don’t want to get too kitschy. Alibi made sense — it’s located in the former drunk tank — so it’s a straight-up bar, dark, low ceilings, real celebrity mug shots… The do not disturb sign for the rooms says, “SOLITARY,” like solitary confinement. Our in-room dining says lock-down. Lydia Shire, celebrity chef, named our Italian restaurant Scampo, which means “escape” in Italian. The Yard [now a posh courtyard] was the prisoners’ exercise yard.

The Liberty Hotel light-heartedly references the past without going over the top.

What reactions have you gotten from people when they learn that they are staying in a former prison?

It was a scary place and there were convicts here, but frequently criminals would spend shorter stints here while awaiting trial or prison. For the most part, people are so in awe of the architecture that it doesn’t bother them.

On the flip side, what do you think it adds to the stay? A sense of excitement? Adventure?

People want to stay in the jail, they want to see the landmark, they love the history, love the story. It excites me, too. I was inspecting the grounds with my team a couple days ago. This guy was walking by who wasn’t a guest of the hotel and I said hello. And he said, “You know, I used to stay here.” And I said, “Did you enjoy your stay?” And he said, “No, no, no, I used to STAY here.” So I said, “What were you in for?” He said, “Grand theft.” So I invited him inside to take a little tour with me (of course my team stayed really close!), and he showed us where the guard tower was, and told us some stories.

Did any fun artifacts turn up during reconstruction?

Not that I heard of, but you know, some of the guards that used to work here will bring us things from time to time. Once a guard brought us an old lock, and a year later, another guard came in with the key for it. As you are walking toward the historic gallery, you can see the real lock and key on the cell door.

Ever have a former inmate stay at the hotel?

The jail closed not so long ago. We have had inmates come back and stay. Usually the ones who were in for something light (like in the drunk tank or something). There is a sense of adventure and excitement because of what used to go on here.

This is the first in our series: Changing City Landscapes. We’re chronicling the fascinating ways cities adapt spaces to fit tomorrow’s needs with building blocks from the past. Through urban adaptive reuse, visionary architects, developers, and city planners are turning blight into beauty. Next in our series: The Tate Modern, once a power plant, now a London art gallery.