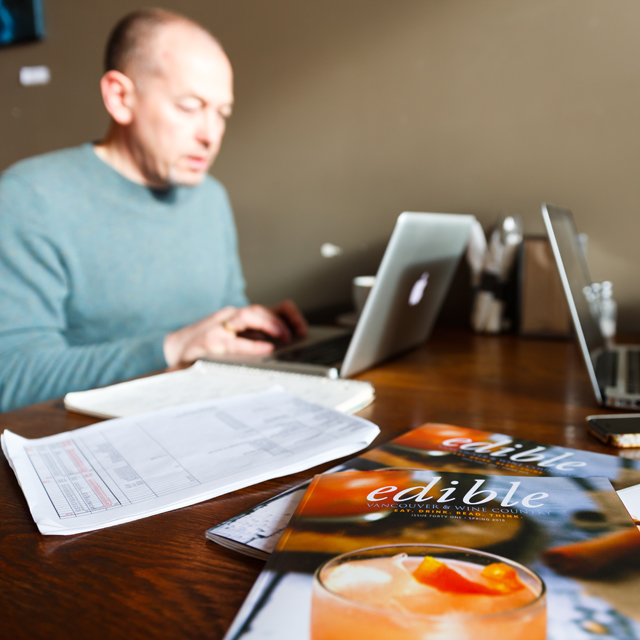 Edible Vancouver: A True Labor of Love (And Cheese)

For many couples, the idea of running a business together is the stuff of nightmares. Spending every waking hour in one another’s company, struggling over workloads with too little separation between business and personal time, sounds like too much of a strain. But this couldn’t be further from the truth in the case of Debbra Mikaelsen and Philip Solman, wife and husband, co-preneurs, and editor and publisher, respectively, of Edible Vancouver & Wine Country.

Debbra and Philip met in 2001, on the Greek island of Skyros. They immediately hit it off and began a four-year long distance relationship that led to Philip moving to Vancouver to marry Debbra. The duo wondered many times how they might work together—Philip worked in social enterprise and sales, Debbra was a writer—but nothing seemed quite right until they heard of Edible Communities, a network of magazines that spans much of North America and is dedicated to changing the way people shop for, cook, and eat their local food.

Edible Vancouver’s co-preneurs Philip and Debbra bring a unique pairing of skills to the table.

As Phil recalls, “I said to Debbra, ‘What about Edible…?’ and I didn’t even have the chance to finish before she said ‘Yes’!” Debbra laughs, “I wasn’t saying ‘yes’ to the idea right away, but I was definitely saying yes to digging in and learning about it more.” So, after painstaking research—and a shared passion about starting a magazine—the couple decided to take the plunge, and in 2007, Edible Vancouver was born.

The focus of Edible Vancouver & Wine Country is to form connections and a sense of community between consumers of food and the people who grow and make it—farmers, cheesemakers, fishers, bakers, vintners, brewers, and others. “The Edible ethos is in line with mine and Debbra’s values,” says Philip, “which makes it easy for us to be good advocates for a movement that is growing every day.”

Accessible wheels for an accessible magazine.
Unlike some food magazines that focus on flash-in-the-pan food trends, the next big restaurant or celebrity chef, and an overall sense of connoisseurship and competitiveness, the couple is committed to creating a magazine and a community centered around how good, healthy, local, and most importantly, delicious food should be accessible to everyone. And it certainly seems they’re on to something, as their shared passion has allowed Edible Vancouver to grow in leaps and bounds.

Debbra states that part of the magazine’s success, and the couple’s success as co-preneurs, is that they each have their own domains when it comes to putting together the publication. “Phil works on the business development and advertising portion, and I work on the editorial. We don’t step too much into each other’s arenas. That means that when the magazine gets laid out by the designer, it’s a surprise when it comes back to us, because we each finally get to see the work the other has done.” Trusting the other’s skills in running their respective sides of the business is instrumental. As Debbra says, “It might be too much for some couples to work together, because it can be stressful at times, but for us it works well. Our skills complement one another.”

A personal connection with the foodie community is key to Edible’s ethos.

The pages of Edible Vancouver & Wine Country magazine are imbued with wit, charm and, of course, a deep love of good food. And through the couple’s complementary working approach, over the past seven years, the magazine has grown from a 32-page quarterly publication to an 80-page magazine that goes out to 65,000 readers. Now, six times a year instead of four, Philip packs boxes of magazines into vans for delivery to the local businesses that act as Edible’s distributors.

From the start, Debbra and Philip used Zipcar to deliver magazines. As their readership grew, so did their vehicle needs. “It was fortuitous that just as the Zipcar SUVs grew too small to make deliveries, Zipvan launched. We were able to keep delivering the magazines the way we always had.” Philip says.

Though it’s a lot of work, Philip is grateful that he’s still able to deliver the magazines himself, enabling him to reinforce community connections. “It means we can still go out and be in direct contact with the business owners, wine makers, farmers, and brewers who are passionate about good, local food, as Debbra and I are.”

Have you used Zipcar for your business? Tell us about it in the comments below.