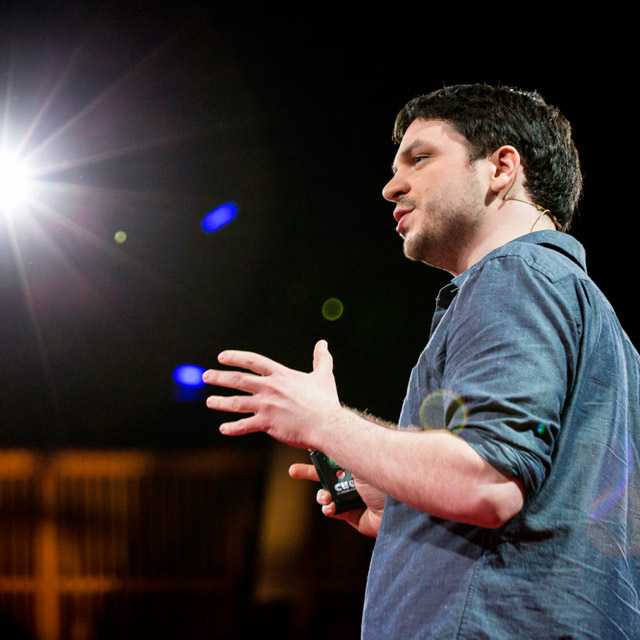 From the serious to the heart-wrenching to the doubled-over-with-laughter hilarious, these 10 Ted talks will usher you into next year with wisdom, intellectual curiosity, and pure joy. Did you know that TED stands for Technology, Entertainment, and Design? Looks like that wisdom is kicking in already.

1) How to be cool as a cucumber when stressed

Neuroscientist Daniel Levitin discusses what happens in your brain and body when you’re stressed that makes you do dumb stuff. Stress causes the brain to release cortisol, increase your heart rate, and cloud your thinking. The antidote he says, is “prospective-hindsight” or taking time to develop a “pre-mortem.”

Contrary to a post-mortem, where you review what happened after an event, in a pre-mortem you look ahead to imagine what things could go wrong and how to mitigate them (before they happen). This hopefully eases anxiety and helps us make smarter decisions about important stuff, like healthcare, finances, and personal relationships. If one of your resolutions is to stress less, then check this out.

2) Teaching the next generation of scientists

This sweet and inspiring TED Talk shows how kids and their imaginations can make a difference locally—and globally. Cesar Harada teaches “Citizen Science and Invention” at Hong Kong Harbor School. (Who doesn’t want to take that class now?) With his kids, aged 6-15, they dream of a better way to solve environmental problems.

And they don’t dream small, whether it’s designing a robot to detect the plastic that pollutes more than 80% of the world’s oceans, or a way to see radiation in the Pacific ocean (much of it from the Fukushima nuclear meltdown). By letting the kids’ imaginations run wild, he proves something remarkable: If you don’t know what the limits are, you don’t have to obey them.

In her hard-hitting talk, Jessica Shortall contrasts the images we often see of working moms bouncing a baby while happily typing away on a laptop, with the raw, real stories of the millions of working mothers in America who are forced back to work within months or weeks of giving birth.

She challenges us to recognize the economic, physical and psychological costs taken on working mothers and their babies. In fact, 88% of working moms get ZERO paid leave after having a baby. 23% will be back on the job within two weeks—barely enough time to adjust physically, and certainly not emotionally, to motherhood. Something’s gotta give.

4) LGBT success stories from around the world

Compared to LBGT couples in other countries, Jenni Chang and Lisa Dazols had a relatively easy time living openly gay in San Francisco. Then they imagined what life was like for gay people in cultures that lacked basic human rights. Say, in Kenya, where gay acts are illegal and 89% of people who come out to their families are disowned. The stories they heard like this were all bad—really bad. But, they thought, there must be good stories, too…right?

So they set off on a trip around the world to find them. From the first openly gay prince in India, to the first Latin American country to grant same-gender marriage (Argentina), they found the inspiring stories they sought, and discovered that equality is not just a Western aspiration.

5) The unexpected beauty of everyday sounds

Singer/songwriter and TED fellow Meklit Hadero uses examples from nature, language, and even silence to demonstrate the music of sound that surrounds us daily. From a birdsong to spoken word to a cooking pan, she illustrates how the everyday soundscape immerses us. “The world is alive with musical expression,” she says. We just have to listen.

What if we told you that we could end hunger and poverty, halt climate change, and achieve gender equality all in the next 15 years? Would you believe it?

Social progress expert Michael Green invites us to suspend disbelief and consider how a vision for a better world can be achieved. The governments of the world met at the UN in September 2015 and agreed to a new set of Global Goals for the development of the world up to 2030. And guess what? We might be able to accomplish them. But not with business as usual.

7) How to find the work you love

Why are you doing the work that you’re doing? Whether you’re just figuring out what you want to do with your life or you’re well into your career, have you ever asked yourself this question? Scott Dinsmore did and it forced him to quit a job that made him miserable, and spend the next four years searching for work based on passion and purpose. He shares what he learned about how to find out what matters to you and make it your life’s work.

Did you know you can fall in love with anyone just by asking them 36 questions? A psychological experiment says yes. Here’s how it works: two strangers ask each other increasingly personal questions and then stare in each other’s eyes for 4 minutes.

Mandy Len Catron tried this experiment, and boom. It worked. She wrote a New York Times article about it that went viral. But are they still together? You have to watch to find out.

9) How a driverless car sees the road

Excited about autonomous cars? Us too. Chris Urmson is one of the brilliant brains behind Google's driverless car program, one of many projects today that aim to have computers replace humans in the driver’s seat.

In this TED Talk, he covers the development of the Google project, and shares some fascinating footage from the perspective of the autonomous car. It shows how these cars see the road and how they make decisions about their next move. (And yes, it’s as cool as it sounds.)

Why do we laugh? Because something’s funny? Duh. Well, there’s more to it than that. Cheeky British neuroscientist Sophie Scott talks about the science of laughter. Did you know you're 30 times more likely to laugh if you're with somebody else than if you're alone? Or that breath works differently when we laugh and when we breathe. Laughing is a truly primitive action on our part. It’s much more like an animal call than human speech. She plays a few examples of human laughter, that you will swear are monkeys. It’s kind of amazing how just hearing other people laugh their heads off will actually crack you up, too. It’s a good way to start 2016 off smiling.