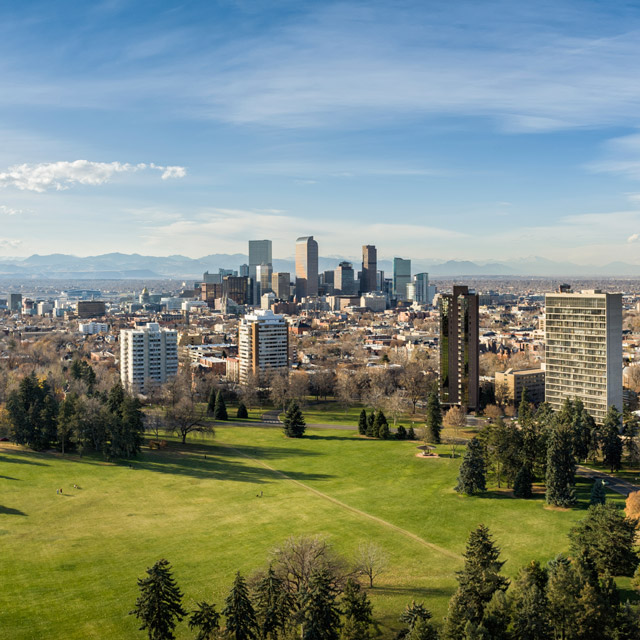 10 Reasons Why Denver is the Place To Be Right Now

Move over tiny homes—there’s a new fad in town. From storefronts to noodle shops, Denverites will put anything in a shipping container, since these durable pods are relatively inexpensive and can be transported almost anywhere. Two shining examples of the trend? 25th & Larimer, a maze of 29 containers in the heart of downtown that house everything from offices to retail shops to acclaimed restaurants, like Work & Class and Cart-Driver. And keep date night interesting at Avanti Food and Beverage, a restaurant incubator that rotates concepts every 12-24 months.

Don’t like the weather? Wait 10 minutes. True Coloradans know to always dress in layers since the atmospheric conditions here can change at the drop of a dime. Unlike the long stretches of dismal weather in some places, don’t be surprised to see us wearing tank tops and Uggs in July.

Colorado consistently has some of the lowest obesity rates in the nation. When we’re not bagging one of our 53 fourteeners, we’re biking Denver’s outstanding greenway and trail system, skiing, or rock climbing in one of four national parks. Plus, it’s easy to find clean, sustainable food here. The city is filled with urban gardens, indoor farms, and like-minded restaurants and businesses. Specialty fitness studios, training centers, and medi-spas abound. Plus, we’ve got um, herbal remedies to cure whatever ails ya.

Green Spaces serves up coworking space for sustainability-minded companies. Image courtesy of Green Spaces.
4. Wanna start your own biz? We've got you.

Step into any Mile High City coffee shop and you’re sure to find a startup, well, starting up. Rub elbows with the area’s most forward-thinking entrepreneurs at Denver Startup Week, or check out one of the city’s many innovative coworking spaces. Our faves: The Commons on Champa (it’s huge and has tons of workshops and speakers) and Green Spaces, which is geared specifically toward socially and environmentally conscious endeavors.

Fly high in the Mile High City with fun and games at Elitch Gardens. Image courtesy of Elitch Gardens.
5. You can see the whole city from a roller coaster.

First-time visitors to Denver may be surprised to see a huge, colorful theme park at the edge of the city’s business district in lower downtown. During the summer, Elitch Gardens is the place to cool off (we are a mile closer to the sun, y’know) and spend a day goofing off with friends. Bonus: Check out the park’s Dive-In Movie nights, when you can catch a flick from a raft in the water park.

Food halls bring multiple restaurants together for a blend of flavors under one roof. Image courtesy of The Source. Photo by Timothy Hursley.
6. Food halls, trucks, and festivals will excite your inner epicurean.

It started in 2013 with The Source. Now, Denver is pioneering the food hall trend—a concept that unites several artisan food producers and local restaurants under one roof—with the addition of Stanley Marketplace and Finn’s Manor. On Tuesdays and Thursdays during the summer, don’t miss Civic Center EATS, when the city’s most beloved food truck vendors set up shop in Civic Center Park downtown. Competition is tough for these spots, so come hungry—you’ll be sampling the city’s best street food.

Is it possible to write a caption about Red Rocks without making a rock pun? This place truly rocks. Image courtesy of iStock, John Schmelzel.
7. Sing with your favorite band under the stars at Red Rocks.

Once you see a show at Red Rocks Amphitheatre, you will be forever spoiled and jaded as far as concerts go. The only naturally occurring, acoustically perfect amphitheater in the world, legendary acts from The Beatles to U2 to renowned opera stars have considered it an honor to grace this stage. And it’s not just for music: other fun summer events include Film on the Rocks, Yoga on the Rocks (snag tickets early, they always sell out quick) and the Red Rocks Fitness Challenge. You can’t get that view in Manhattan.

In the craft beer paradise of Denver, there’s a brew for whatever ales you. Image courtesy of iStock, bhofack2.
8. Portland and Asheville have nothing on our craft beer scene; we're just not as in-your-face about it.

It’s no secret that Denver is a big beer town. Every fall, the Great American Beer Festival brings thousands of microbrew-lovers to our fair city. A more interesting event from a local’s perspective, though, is Collaboration Fest in March—where else can you get collaborative suds crafted by two or more breweries working together? If you can’t wait until March, you can always come to Festivus in December—it’s put on by the same people.

The RiNo neighborhood serves up some of the best street art, like this Dave Choe mural. Image courtesy of Denver Street Art. Artwork by Dave Choe.
9. We've got a street art scene even Banksy would admire.

Hang out in Denver long enough and you are sure to end up somewhere in the RiNo (River North) neighborhood. Just a few years ago it was a gritty, industrial neighborhood whose main attraction was its plethora of unsightly, drafty warehouses. Now, it’s a Mecca for creatives—filled with chic eateries, galleries, and stylish multi-use buildings. Once you’re here, take in the vibrant murals, public art, and painted buildings.

Whether you hop on a bike or hop in a bus, it’s wheel-y easy to get around the city. Image courtesy of iStock, Juli Scalzi.
10. Never waste data on checking a subway schedule again.

Denver has one of the best bike-sharing programs in the country. We’ve also got a great bus system and the Free MallRide—a complimentary shuttle that runs the length of Denver’s legendary 16th Street Mall and whisks you to great shopping, eats and attractions. The city also boasts a fantastic light rail system. And when we get the new A line in April? Game changer. Finally, a way to get from Union Station to the airport in under 40 minutes. And for those occasions when you absolutely must have four wheels, never fear: we’ve got plenty of Zipcars, too.