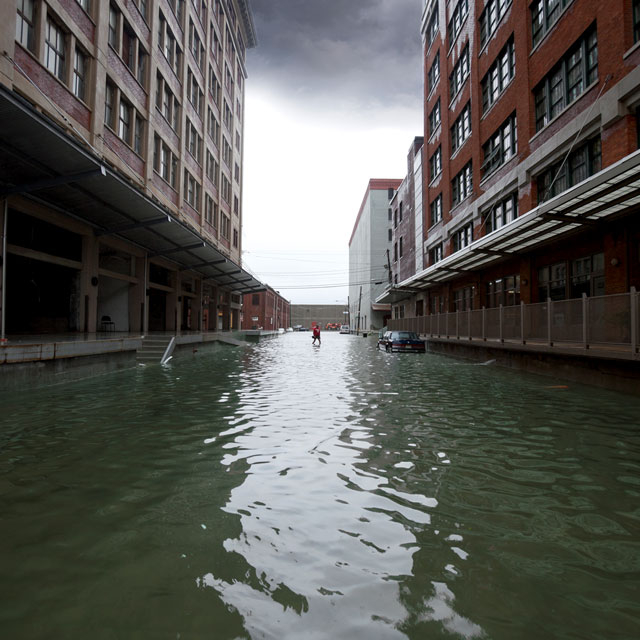 While the Country Debates, Cities Take Action to Prep for Climate Change

With higher than normal sea levels, and more severe storms, cities by the coast are on the frontlines.

Cities, especially on the coasts, are the canaries in the coal mine of climate change. Most Americans live within 100 miles of a coast. Major parts of cities like NY, Boston, and Miami could be underwater and uninhabitable as oceans rise 6 feet higher by the next century. Lower income city dwellers will be the most vulnerable. Climate refugees migrating to higher ground will become increasingly common and could lead to resource strain on many municipalities.

Climate scientists (already a pretty nervous bunch) have been sounding more dire than usual. The facts: 2016 was the hottest year on record, beating out the previous record-holder: 2015... which beat 2014. See a pattern? If you want to have nightmares tonight, try out the NOAA sea level rise tool that lets you use a slider to see what your city landmarks would look like if sea levels rise above 6 feet.

An artist’s rendering of a flooded Fenway Park, courtesy of the Environmental League of Massachusetts.

Unless we speed up efforts to slow global warming, the effects of climate change—extreme storms, wildfires and drought, sea level rise and storm surge, choking air pollution in cities, disruption of agricultural supply chains and jobs in rural heartlands, and coastal erosion, to name a few—are a clear and present danger to American interests at home and abroad.

So much of the discussion is frightening and creates cognitive dissonance when we look out the window and see clear, blue skies and sailboats placidly floating along seacoasts. It makes you want to put your head in the unseasonably warm sand and say, “Hey, 60 degrees in January is a-okay with me!”

But before you give up, here’s the good news…

WHAT ARE CITIES DOING TO STEM THE PROBLEM & BECOME MORE RESILIENT?

We love our cities. To ensure their future, we must protect what makes them great: the natural environment, rich culture, and diverse people. Mayors in cities across America are stepping up and setting up their cities to be more resilient to the threat of climate change and other existential threats, and to reduce greenhouse gas emissions to help stem the problem.

Around the globe, local government officials have been developing plans and partnerships to reduce their city’s contribution to the problems of a warming planet, and to take bold steps to make their cities more resilient.

In an open letter to President Donald Trump, penned by 68 mayors from large and small U.S. cities, comprising over 37 million Americans from states both blue and red, mayors expressed their desire to work together to make our cities more resilient in the face of growing concerns over inevitable climate shifts.

From the open letter to President Trump: “As mayors, we have taken it upon ourselves to take bold action within our cities to tackle the climate crisis head-on.” You go, mayors.

And the letter is just the tip of the iceberg. Many cities are well on their way, with ever-increasing public support right behind them. This Election Day, American voters approved more than $200 billion in local measures that were funded by their own tax dollars to improve quality of life and reduce carbon pollution.

During “Superstorm” Sandy in 2012, the City of New York saw its largest disaster since 9/11. Unprecedented storm surges from the Hudson breached sea walls and flooded lower Manhattan. This video from the NJ–NYC Path train is a frightening example of the helplessness of man against Mother Nature.

In 2012, Hurricane Sandy caused the flooding of the New York City Subway system and all road tunnels entering Manhattan except the Lincoln Tunnel.

After Sandy devastated 24 states—costing more than $65 billion in damages and the loss of 117 lives, President Obama’s Hurricane Sandy Rebuilding Task Force launched an innovative design competition: Rebuild by Design. HUD awarded $930 million to implement the first phases of 7 projects, which are helping other cities rethink resilience before disaster strikes. “These winning proposals are truly transformative and serve as blueprints for how we can safeguard the region and make it more environmentally and economically resilient," said Shaun Donovan, Housing and Urban Dev Secretary.

Check out the designs, which envision a way to live with the water. One of the winning projects, The Big U, sets forth a proposal for a protective system around a low-lying section of one of the most densely populated areas of Manhattan. A buffer will both shelter the area from storm surges and rising sea levels, and (on pleasant weather days) offer waterfront access for relaxation, socializing, and enjoying river vistas. The Big U is being jointly funded by the federal government and the City of NY, with construction set to begin later this year.

A recent report submitted to Boston city officials concludes that the consequences of climate change on Boston will have a far more calamitous effect than previously suspected. The worst-case scenario is that sea levels rise more than 10 feet by the end of the century, plunging 30% of Boston underwater. “It raises the stakes for policymakers to curb emissions,” said Julie Wormser, Vice President for Policy and Planning at Boston Harbor Now, a local advocacy group.

The updated projections take into account new research that suggests the accelerating melt of the ice sheets covering Antarctica will have a disproportionate impact on cities along the East Coast. As ice melts on the South Pole, the resulting gravitational pull on the ocean (as well as the gradual sinking of land in the Northeast) means that Boston and other nearby communities are likely to experience about 25% higher increases of sea level than other parts of the planet. “Boston is a bull’s-eye for more sea level damage,” said Rob DeConto, a climate scientist at UMass Amherst who helped develop the new Antarctica research and who co-wrote the new Boston report.

If high levels of greenhouse gases continue to be released into the atmosphere, the seas around Boston could rise as much as 6 feet by 2100 and nearly 12 feet by 2200, with other coastal US cities facing similarly dire predictions.

With no shortage of creativity, Boston planners and architects have hatched a scheme to convert low-lying streets into a network of canals capable of transforming rising sea levels into a natural amenity, with a series of footbridges connecting the Back Bay, à la Venice. (We won’t dwell on the fact that the water could cover all that awesome Big Dig work. Sigh.)

Water, Water, Everywhere, and Not a Drop to Drink

While many cities face fear of rising tides, California has been experiencing its longest drought on record, made worse by the shrinking Sierra snowpack, a vital stockpile of freshwater. In Matthew Kahn’s book “Climatopolis,” he says: "In the future, LA’s climate will look like Jacksonville, Florida’s climate today."

California's extreme drought means local groundwater sources only meet 30–40% of LA county's demands. To make up the difference, LA imports water from northern California among other areas. But Los Angeles County isn't the only rain-starved region in California. Almost all the state's reservoirs were at less than 50% capacity this January.

Lack of rain and high temperatures are triggering more and more wildfires. “This year fire season never ended in Southern California,” Daniel Berlant, a spokesman for the California Department of Forestry and Fire Protection, told The New York Times.

In the California of today, wildfire season never ends. Photo courtesy of the NY Times.

Capturing and cleaning rainwater could significantly reduce dependency on imported water, preparing LA to bounce back from possible disasters, and keep rivers and beaches clean, usable, and thriving with wildlife. In addition, through efforts to reduce leakage and waste, and incentivizing Angelinians to curb use, LA plans to reduce potable water use by 20% and to become more water self-reliant – going from sourcing just 15% of its water locally to 50% by 2035.

Look on the Bright Side

Lack of rain does have its upside: LA receives more than 250 days of sunshine per year and has the greatest amount of installed solar power capacity of any U.S. city, with a vision to double usage of local solar power production and storage. They also plan to expand affordable housing solar programs to additional low-income customers.

Coupled with increasing clean energy sources like solar power, LA has been drastically reducing its reliance on dirty energy. Coal is the dirtiest of all fossil fuels; it creates more pollution than oil, natural gas, or gasoline when burned. Transportation and coal-fired power plants are some of the largest sources of GHGs. LA plans to be completely divested from coal-fired power plants by 2025.

Along with cleaner energy, many cities are adopting environmental justice programs focused on low-income and minority communities that have historically been burdened by environmental problems. These programs provide no-cost energy efficiency solutions to income-eligible applicants, access to free or low-cost energy assessments, and training for green-collar jobs. Creating a green industry is a win-win for both the economy and the planet.

Not surprisingly, cities are the world’s biggest polluters – more than 70% of global greenhouse-gas emissions come from cities. What may be surprising to learn is that energy used in buildings the largest source of GHGs. Buildings account for an average of 41% of the world’s energy use. The two other biggest energy consumers don’t even come close. (Industry: 30%; Transportation: 29%).

What’s gobbling up all that energy? A few things: the huge amount of electricity that buildings tend to use in lighting, heating and cooling systems, plus computers and office equipment, many of which never get turned off. Think of all the energy used (and wasted) at your office. Now multiply that by every building in your city, and by cities all across the globe.

With megacities on the rise, implementing building efficiency standards is one of the most affordable ways to cut carbon emissions. (It’s also what Mom always told you: “Turn off the lights…we don ‘t own the electric company!”) Green building tax credits can be provided by local government as incentive for builders to go green. LEED-certified buildings have 34% lower CO2 emissions, consume 25% less energy and 11% less water, and have diverted more than 80 million tons of waste from landfills.

More than 70% of greenhouse-gas emissions come from cities. “Green” building can make a big impact.

A multi-family building program for low-income housing in the Midwest incentivizes new government-assisted projects to include smart building materials, and renewable and efficient energy systems. Lower utility bills for tenants, financial incentives for builders, and reduced carbon emissions make it a win for the people, proprietor, and planet.

While there is no 'silver bullet' solution, cities that are well positioned to become more resilient to the consequences of climate change will become a model for others to do the same.

The old adage has never had more resonance than when talking about climate change. As scientists petition Washington to pay attention to hard facts, lawmakers drag their heels, but locally – things are happening.

From the open letter to Donald Trump from U.S. mayors:

While we are prepared to forge ahead even in the absence of federal support, we know that if we stand united on this issue, we can make change that will resonate for generations. We have no choice and no room to doubt our resolve. The time for bold leadership and action is now.

What can you do? Contact your state legislators and tell them to support strong, science-based policies to reduce global warming emissions and prepare for the impacts of climate change. Your city—and your planet—will thank you.