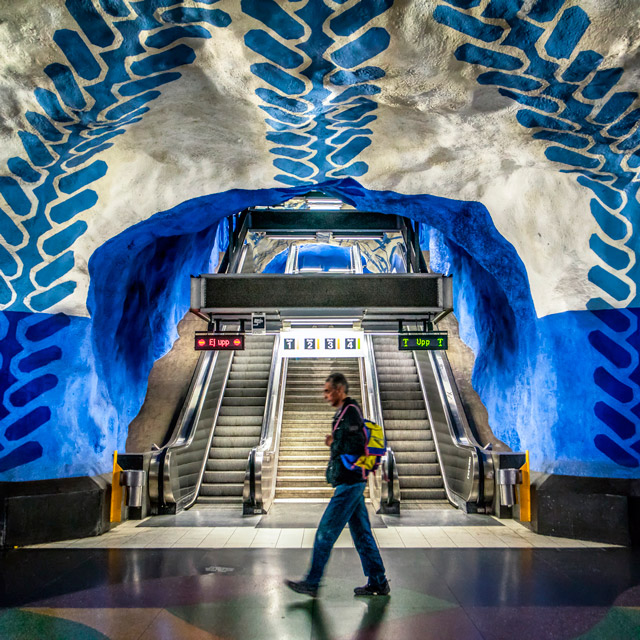 If you poll a group of city-dwellers about their favorite time of day, we can bet no one says “my commute.” While opting for public trans vs. commuting by car is totally doable (and cheaper and better for the planet), getting to work on time—and navigating the crowds—can still be a source of stress.

But maybe not for much longer. All over the world, cities are rolling out new transportation innovations to help make your commute smoother, easier…and hey, even entertaining. From art installations to library books on demand, you might just start looking forward to jumping on the train in the morning. No, really.

New York wouldn’t be New York without the subway. Given that it’s part of the daily routine for most, it might as well look pretty. The MTA’s Arts & Design program has been slayin’ it since the ‘80s, and has installed numerous sculptures, mosaics, and other artworks across the city (including this vibrant piece at Columbus Circle by Sol LeWitt). Still not feeling inspired? Check out these other wondrous subway art works around the world—or lend an ear to LCD Soundsystem’s James Murphy, who’s using found transit sounds as the basis for a new musical work, Subway Symphony.

With inspiring art installations, a visit to New York is as engaging underground as it is above. Photo by Vanni Archive Architectural Photography.

Enjoy a relaxing excerpt from the outdoors with Tokyo’s subway birdcalls. Photo by estherpoon/iStock/Thinkstock.

And speaking of crowds: If you’re craving some public politeness, Chicago is where it’s at (famously foul-mouthed mayors notwithstanding). The CTA’s latest courtesy campaign is making transit etiquette the serious (but also tongue-in-cheek) topic of conversation, with an amusing promotional campaign calling out rude behavior like littering, blasting music, and loud phone calls. Preach.

Quick: What are your biggest transit pet peeves? How about visiting a city, then being forced to dump your cash-filled transit pass at the end of your trip? If you happen to be vacationing in London, then waste no longer. A new start-up, Common Pence, aims to install mobile hubs where commuters can swipe to donate the excess sums on their Oyster cards to charity.

5. MOBILE LIBRARIES IN THE BAY AREA

Kindles are nice and all, and we love a good podcast, but sometimes a real book is just the thing on a long commute (especially when you’ve, ahem, forgotten to charge your batteries). If you’re living in the Bay Area, the Contra Costa County Library’s got you covered. Its in-station Library-A-Go-Go machines each house over 300 books, all of which can be borrowed for free in a matter of minutes. Libraries are awesome.

Curl up with a good book at home…or on the Bay Area’s public transit. Photos by Cedar Rapids Public Library and Thinkstock, Creatas Collection.

Seoul’s subway system regularly ranks among the best in the world, and, well, once we heard that their trains come equipped with heated seats in the winter, we were on board (not literally—we wish). In addition, on-train routers ensure lightning-fast Wi-Fi, while TV screens provide entertainment on the go. It’s almost like being in your living room.

Tired of juggling change, finding your card’s expired or—heaven forbid—having to hoard a stash of tokens? In Austin, all you need to pay for your commute is your phone. Capital Metro’s CapMetro app lets you buy tickets, check schedules and maps, and keep up-to-date on when that next train’s arriving. Take note, other cities (except Toronto—they’ve got the system in place, too).

Always be in the know with Austin’s hi-tech transit app. Photo by Brio Photography/Capital Metro.

8. CHOOSE YOUR OWN DECOR IN STOCKHOLM

Want to have a say in how your subway system looks? We might suggest visiting Stockholm. The Swedish capital is in the midst of constructing a new subway line, and recently crowdsourced its design scheme from locals. As far as transportation innovations go, this is one we’d like to import. Now, who’s up for polka dots?

Get a taste of local color with Stockholm’s crowdsourced design schemes. Photo by Giuseppe Milo/Flickr.