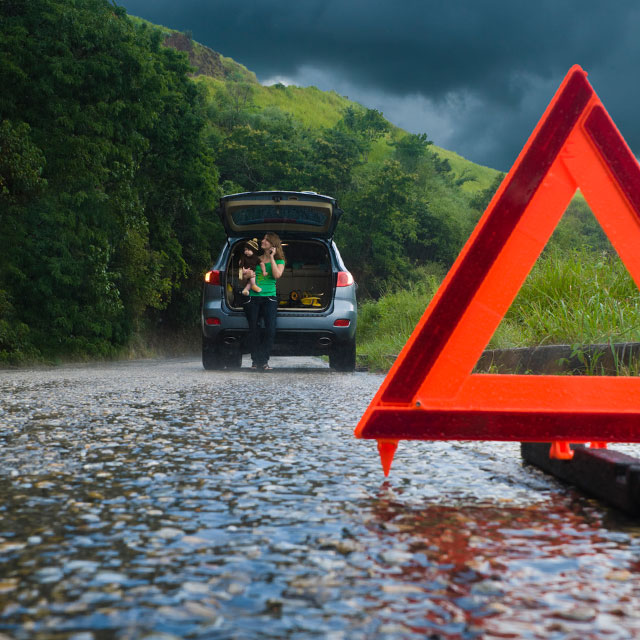 How to Handle Emergency Situations While Driving

Whether you drive every day or just for infrequent road trips, you always want to be safe behind the wheel. And to be safe, you need to be prepared…even for the most unlikely events.

What do you do if you’re driving when a flood, tornado, or severe thunderstorm hits? What about swerving or losing control of the vehicle? Breaking down in a remote location? And—yes, it’s a movie cliché—but what if you drive off the road into a body of water?

These survival scenarios might be more extreme than most people are likely to face, but they’re still helpful to understand. Take this quick guide as your introductory prep (and check resources like the National Highway Traffic Safety Administration for more comprehensive answers).

Cloudy with a chance of…getting off the road until the storm clears.

You’re driving along, when slowly the pitter-patter on your windshield becomes a downpour. And then the real dark clouds come rolling in. Do you keep driving, slow down, or pull over?

William Van Tassel, PhD, is the manager of driving training operations for AAA. He recommends the tried-and-true policy of “better safe than sorry,” emphasizing that the most important step is finding a safe place to be once you’re off the road. “Position your vehicle so the chance of you being hit by another vehicle is minimized…Park behind a guard rail, so if anyone comes toward you, they’ll hit the guard rail instead of you.” If you do continue forward, remember that you lose about 1/3 of your tire’s traction, so reduce your speed proportionally.

In the case of a flash flood, the conditions can be more immediate and serious. Richard Stebbins, a safety trainer at Survival Systems, urges prevention. “Don’t drive if there’s even a risk,” he cautions. “Check the radio, check the weather forecast.” A seemingly low water level is enough to dislodge tires, so it’s better not to drive at all. In the case that you are already in the car when a flash flood hits, stay in the car—you don’t want to be on your feet in rushing water.

“Half an inch of water doesn’t look like a lot, but it doesn’t take much to get a car in a ditch.” – Richard Stebbins, Survival Systems USA

What about a tornado? “Get out of the car and get as low to the ground as possible,” Van Tassel says. “Preferably a ditch.” In the case of a twister, you don’t want to be in the vehicle—if it’s higher than its surroundings (i.e., a flat freeway), it could get swept right off the road.

In case of car troubles, try to alert other drivers for help—or to stay clear.

When an obstacle appears in your path (like an animal darting onto the road), many drivers tend to swerve out of the way. Scott Marshall, the driving safety expert behind the Safe Driver Canada blog, advises to react more mindfully. “The mistake that many drivers make is they try to turn, and they overcorrect,” he says. That leads to spinning or moving out of control. Instead, set your eyes on a fixed point: “The moment you start to swerve, look where you want the car to go. Try to keep going in a straight line.”

“The challenge is not to freeze up, and to take action.” – William Van Tassel, PhD, AAA

CAR TROUBLE IN A REMOTE AREA

Especially in a remote area, stay with the car rather than walking away to get help.

Sometimes, car trouble happens in inconvenient places. In the common theme of prevention, Marshall recommends telling someone your estimated time of arrival and which route you’re taking. If you end up getting stuck without cell service, at least someone will know that you’re late and have an idea of where to find you. In case it’s not entirely off the grid? “Have a fully charged cell phone!”

First, find a safe place to pull over. “Stay with the vehicle, because your vehicle is more visible,” advises Van Tassel. (And wandering could get you lost—and, depending on how cold it is—in danger of exposure, too.) While it may seem helpful to turn on your hazard lights, they can be a vague signal. Other drivers may think you already have help on the way and are simply signaling for them to go around you. Instead, put up your hood—the universal sign for car trouble.

When you know you’ll be taking a long drive through a remote area, come prepared with all the essentials: a back-up cell phone battery, food, water, blanket, toilet paper…anything that will keep you strong and comfortable while you work towards a solution.

DRIVING INTO A BODY OF WATER

Dangerous situations, like a flash flood, are one place you don’t want to make a splash.

While it seems more action movie than real life, there are rare occasions when drivers lose control on bridges or coastal roads and end up diving into a body of water. That doesn’t mean it’s not worth being prepared.

Stebbins and Ehm of Survival Systems specialize in underwater egress training, teaching commercial and military drivers and pilots how to act swiftly in the rare case of a water crash. “Going off a bridge, focus on protecting yourself before impact,” says Ehm. The best case scenario is to get out before the car is fully submerged. “Keep your seatbelt on and try to roll down your window, as electricity won’t work underwater,” says Stebbins. Once the car hits the surface, you’ll have a few valuable seconds to crawl out before the car goes under.

“The best case is to get out before the car is fully submerged.” – Jon Ehm, Survival Systems USA

What if the windows are closed and the vehicle sinks below the surface? Ehm gives drivers a quick physics lesson: “You have to wait for the pressure to equalize inside and outside of the car.” That means opening a window (by force, if needed—think about getting the $15 resqhammer) and allowing water to fill up the car.

However, even with closed windows, water will come in through the HVAC system and other openings. Exit however you can—the door may open if pressure is equalized—and swim to the surface. You may be inclined to take off your shoes to reduce weight, but in this case, it won’t make much of a difference. You’ll be thankful for the protection once you reach shore.

No matter the scenario, always try to keep calm and act efficiently. As Marshall says, “Keeping your cool will allow you to think a little clearer, and with that, you can solve most problems.”

You never know what could happen on the road. Keep calm and focus on your safety.