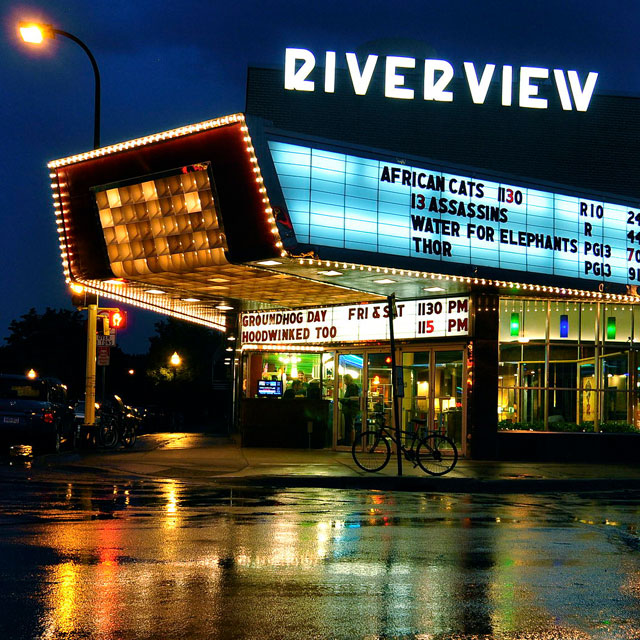 Reel Magic: 7 Old-Fashioned Cinemas to Catch a Movie in Your City

Long before big-box multiplexes dominated movie-going in America, theaters were built with architectural integrity and elaborate interiors to entertain the masses pre-TV. Those with 1,000+ seats were called movie palaces and designed accordingly. Much of that grandeur has been demolished over the decades, but a few have withstood the test of time, especially in cities across the country. Grab a sugary snack and cola, and take a seat in these old-timey theaters where the projectors still run. There’s far more to gaze at than just the screen.

The Hollywood Theatre is a landmark for classic films, live performances and special guests. Image courtesy of Visitor7.

Opened in 1926 for vaudeville and motion pictures, this Portland landmark was so distinctive that the surrounding neighborhood became known as Hollywood. The Spanish Baroque entrance pavilion is dazzling, while the eclectic terra cotta facade evokes entertainment with three arched recesses, topped by a little balcony; a neon sign was added in the ‘40s. Over time the theatre deteriorated until a non-profit purchased the building to restore its former glory and add modern screens and surround sound. Original light fixtures remain in use and 70mm film projection—first used here in 1959—made a comeback a few years ago. As if the exterior wasn’t enough eye candy, the popcorn was voted best in Portland.

The Texas Theatre still holds it history with a few classic upgrades such as the full service bar.

The nominee for most notorious theater still standing is deep in the heart of Texas. Built in 1931 as an Italian medieval brick and stone structure, The Texas has undergone many facelifts and changes in ownership. On November 22, 1963, Lee Harvey Oswald was apprehended inside after the assassination of President Kennedy. To erase the stigma, the theater was remodeled. Fantastic interior Venetian elements were covered in stucco and the exterior design was simplified. (Oswald’s seat, too, is long gone.) In 1991, director Oliver Stone paid to restore the outside to its 1963 appearance for the filming of “JFK.” A few years later, a five-alarm fire ravaged the building, but like a phoenix, Dallas’s Texas Theatre rose again.

The screen at the Riverview Theater has now been lit for more than half a century. Image courtesy of Dan.

This cinema was an early adopter of stadium seating when it opened in 1948. Dressed in pale greens and golds, the lobby feels like a mid-century time warp. Furnishings dating back to the 1950s include lamps and Italian marble tables, while recessed movie poster cases flank the copper drinking fountain. The original stage curtain still hangs in front of the single screen, but sound and seating are thoroughly modern. Plush rocker chairs with high backs and moveable armrest cupholders offer a best-in-comfort experience. Butter melted one pound at a time(!) tops the popcorn, which gets rave reviews. Even better? At just $3 for adults, even admission is retro.

The historic Tower Theater is a hub for community involvement in Miami.

This historic South Florida venue debuted in 1926 during the Miami land boom, with a tile roof and Spanish-inspired interior. As styles changed, the theater got an Art Deco makeover with zigzag stucco banding, glass blocks, and a crowning 40-foot steel tower with neon lighting. In the ‘60s, an influx of Cuban refugees turned the neighborhood into Little Havana. The Tower Theater on Calle Ocho (8th Street) served as an introduction to American culture and entertainment. As the first theater in the city to offer Spanish subtitles, movies here helped immigrants learn English. Now under the aegis of Miami Dade College, Tower Theater stages cultural performances and scholarly lectures, in addition to films in English and Spanish.

Baltimore’s oldest movie theater doesn’t have an eye-catching facade like those in other cities. That’s because it was designed as a warehouse for cable cars. This Beaux-Arts building from 1892 was adaptively reused into a single-screen cinema that showed WWII-era newsreels and art films. Initially called The Times, the name changed to The Charles, but the theater basically stayed the same until expansion in 1999—even the original auditorium remains well-preserved. Once known for being on the wrong side of the tracks, the neighborhood has rebounded. Today you can catch everything from Hollywood blockbusters to foreign films, and anime to cinema classics. Fun fact: The Charles is under the same management as Baltimore’s Senator Theatre, which debuted in 1939.

While historic theaters in Times Square stage Broadway performances, good luck finding one in which to see a movie. When the Ziegfeld went dark in 2016, no old-timers remained dedicated to motion pictures. However, further afield, one hangs on in Queens. Built in the 1930s, Kew Gardens Cinemas has a muted Art Deco exterior and checkered past, screening everything from art house to XXX flicks (till the city shut it down). Now back to more wholesome programming, the original theater retains its arch and mini stage, while five more screening rooms were added. The latest development is more visible: 6,000 square feet of rooftop solar panels power the lights and projectors. This August, the Kew Gardens Festival of Cinema showcases indie films from around the world, right here in America’s most diverse county.

Situated in Los Angeles, this momentous single-screen theater was home to a packed Hollywood audience. Image courtesy of Yo Shi.

A roundup of historic theaters wouldn’t be complete without one in Tinseltown. LA has a number to choose from, but we like this neighborhood cinema in Los Feliz. The Vista, opened in 1923 as a vaudeville playhouse, is a mashup of divergent styles. The exterior is Spanish Colonial Revival, but the discovery of King Tut’s tomb in 1922 prompted a redesign of the interior to everything Egyptian. Etched into the walls are hieroglyphics and colorful motifs, masterful enough to make a pharaoh proud. The Vista Theatre remains true to its single screen and 35mm film projector, but has added a digital one to keep up with the times. In the vein of TCL Chinese Theatre in Hollywood, handprints of notable actors whose films screened here are cemented outside in the sidewalk.