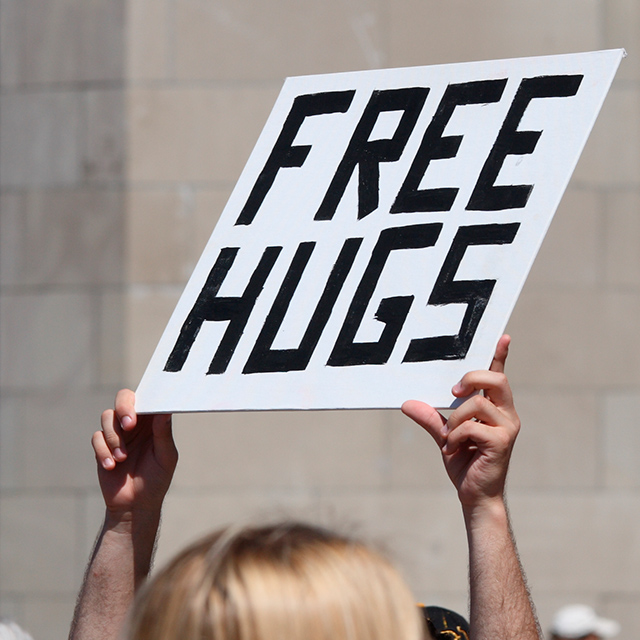 Not in a relationship on Valentine’s Day? So what! Hey, it’s a Hallmark holiday anyway, designed to sell candy, cards, flowers, and stuffed bears the size of Texas, right?

Instead, how about a conversation heart that says: bah humbug? Yup, Valentine’s scroogery is all the rage, and anti-Valentine’s celebrations are getting just as big as the traditional kissy-face kind. So check out these seven things to do if you’re single (and fabulous) in the city on Valentine’s Day.

If you’re single and proud, have a personal empowerment party. Invite your single friends over and toast to your unattached status. Get some inspiration from Quirky Alone. Centered around a book by Sasha Cagen, it’s a movement celebrating people who are having a great time NOT being in relationships. As her site says, it’s for “unapologetic romantics who enjoy being single.”

While not opposed to being in a relationship, the quirky-alone type generally prefers singledom to coupledom for its own sake. It’s about being defined by who you are, not who you’re dating. Sounds pretty healthy, doesn’t it? And Valentine’s might just be the perfect time to enjoy the best relationship you’ve ever had—with yourself.

Who says Valentine love has to be the romantic kind? Use this as national friend appreciation day. Celebrate the friends you love who make your life special. Historians have noted that the origins of Valentine’s Day were not all centered around romantic love. It was also known as a time to share gifts and appreciation with friends.

We have a sense that this may be more of a female phenom (see #6, Galentine’s Day) but there’s no reason why platonic male-female friends or bromancers can’t take a minute to remember the chosen family they count on, day in and day out—even when a lovebird has flown the coop. Give your bestie a rose and a card, and share brunch or drinks at a place that won’t be mobbed with shmoopies shmooching. “Love is temporary, but friends are forever.” – Abraham Lincoln, or someone like that.

Instead of focusing all your love and attention on just one person, why not extend Valentine’s Day to charity? Volunteer at a local food bank, hand out flowers at a nursing home (you’ll be the most popular person there), or pitch in to deliver Meals on Wheels. Random acts of kindness like this pay the love forward. You could make someone who’s alone feel a little less lonely on Valentine’s Day. (Get the low down on volunteer opportunities in your area at VolunteerMatch.)

Think your love life's bad? Check out the Doomed Valentine's Day installment of Mortified at theaters across the country from February 10–14. Started by David Nadelberg and Neil Katcher, Mortified has spawned a book, a movie, a TV show, a podcast, and a national stage show that features dozens of grown men and women sharing the diary entries, stories, poems, and songs they penned in their teenage years, filled with all the angst and anguish that age encompasses. It's cringe-worthy, hilarious, and cathartic. (Sort of like adolescence itself.) And what better time to wallow in the unrequited love of a teenage crush than Valentine’s Day? Put your Trapper Keeper in your locker and go check it out.

Lots of local movie houses feature the perfect anti-V-day lineup. If you’re putting together your own movie marathon, here are a few suggestions:

Once Bitten (1985): Early Jim Carrey and sexy cougar Lauren Hutton star in a vampire romantic comedy that’s got all the romance of a hickey.

Pillow Talk (1959): This classic romp stars some of Hollywood’s most famously closeted celebrities (Rock Hudson and Doris Day) as a couple who seem more enamored with making sexual innuendo than with each other. Or watch the modernized verison, Down with Love (2003), with a fresh-faced Renee Zellwegger, a swoonable Ewan McGregor, and Tony Randall, who plays the David Hyde Pierce role in the original 1959 movie.

Eternal Sunshine of the Spotless Mind (2004): Break up? What break up? In this amazing Michel Gondry and Charlie Kaufman film, the protagonists live in a world where a memory wipe procedure can erase the painful remnants of a failed relationship. Sorry, it’s not a documentary. This memory lapse-inator does not actually exist – yet.

Halloween (1978): Seems more like a Halloween movie marathon? Granted. But it’s certainly not romantic in the least. As you watch, note that every character who is in a relationship gets whacked. And the single Jamie Lee Curtis, in high-waisted polyester pants? She survives to one day star in yogurt commercials. #SingleGirlFortheWin

Coined by Leslie Knope from NBC’s “Parks and Rec,” Galentine’s Day is observed on Feb. 13 and described as: “Ladies celebrating ladies.” Galentine’s Day is a time for you and your favorite women to get together for brunch, drink mimosas, exchange gifts, and pretend like you live on that island where Wonder Woman was born. Leslie describes it thusly: “It’s like Lilith Fair, minus the angst. Plus frittatas.” Sorry bros; this one is all about the ladies. As Leslie’s Girl Code states: “Hoes before bros, uteruses before duderuses, ovaries before brovaries.” Of course, there could also be a Brotherly Love Day, if the guys were into it. Brunch with beer? Why not?

You can’t go through the city and avoid all mention of this saccharine holiday, unfortch. Not with the legions of red heart-shaped candy boxes at the drug store, stuffed dogs declaring “I Ruff You,” and dudes selling bucket roses at every intersection—quelle romantique! (Incidentally, this author spent a particularly memorable Valentine’s Eve selling roses roadside with a boyfriend whose parents owned a flower shop. I’d like to say it was unconventionally romantic... but no; it sucked.)

So what’s a singleton to do? How about bupkis? Give yourself permission to just Netflix and chill (literally—not, like, the couple’s version). Or go to your favorite coffee shop, do some yoga, linger a while in the bookstore. Practice a little self-love and take a night off from the FOMO. You’re strong—you’ve earned it.