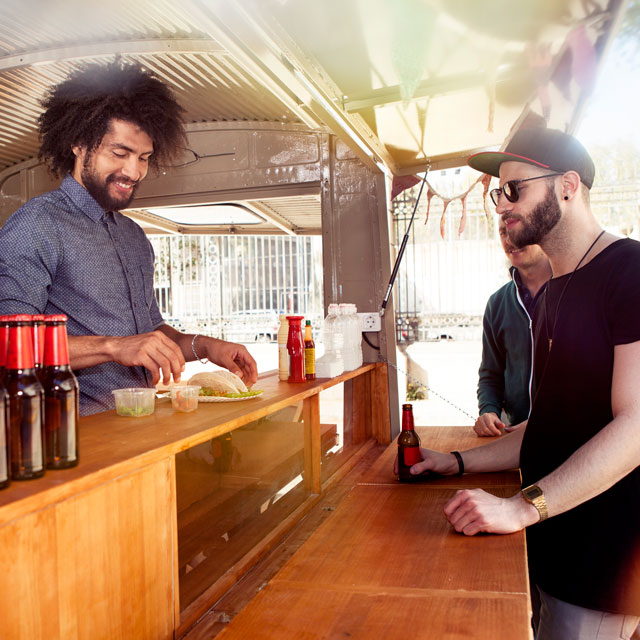 Where to Find the Best Tacos in Los Angeles

Angelenos take their tacos very seriously—if your tortillas are insipid or your carnitas are dry, you don’t stand a chance in this town. But luckily, for those looking to go on a Master of None-style quest for the best tacos in Los Angeles, there are more trucks, restaurants and shacks serving them up than you could sample in a month, let alone a day. To help you out, we’ve picked eight of our faves to guide your journey. Vamos!

It’s not a taco quest in LA without some legit, Baja-style fish tacos, and Ricky’s Fish Tacos is famous for serving what could be the city’s best. These babies are infamous for their flakiness, crispy batter, and piquant pico de gallo. For a bonus, see if you can spot owner Ricky Peña behind the sticks, sporting his trademark fedora.

Mariscos Jalisco is easy to spot: it’s the taco truck on Olympic Blvd with the ginormous line. But don’t let that dissuade you. This local legend has been slinging its craft for more than a decade, and its dorado de camarón has often been dubbed the single best taco in all of Los Angeles. (It helps that it comes crammed with shrimp, deep-fried, slathered in salsa, and crowned with avocado.)

You’ll want to get a good look at your unconventional masterpiece from Guerrilla Tacos. Credit: T.Tseng/Flickr

Some are all about the traditional. Others are a showcase for contemporary culinary flourishes. The folks at Guerrilla Tacos, run by chef Wes Avila, fall in the latter category. While Guerrilla’s menu changes daily, you can expect to find creations as diverse as sweet potato tacos with almond chile, feta, fried corn and scallions, or pork shoulder tacos with chile de arbol, gooseberries, cilantro, and sumac onions.

If you consider yourself a carnitas fiend, you can’t do better than Carnitas El Momo (yup, you guessed it: it’s their specialty). The tacos here are almost overflowing with owner Momo Acosta’s slow-cooked pork, which comes virtually unadorned—all the better to let the quality of the meat shine through.

Guisados Tacos offers a diverse array of ingredients, but anything will taste good on freshly ground masa. Credit: Guisados Tacos

The meat is simmered for hours. The spice levels aren’t messing around. And the tortillas are thick and made to order (with freshly ground masa from a local supplier). No wonder Guisados earns the title as one of the best. If you can’t decide between the bistec en salsa roja or the mole poblano, the tinga de pollo or the cochinita pibil, the chorizo or the camarones, simply order a six-taco sample platter to try ’em all. You might want a taco buddy for this one.

Petty Cash, a trendy taqueria with two locations, touts itself as “semi-authentic.” What does that mean? It means that Chef Walter Manzke’s creations range from an octopus taco with jack cheese, peanuts, and chile de arbol, to a blue corn taco with grilled maitake mushrooms. Wash it all down with the signature “dirty horchata” or a Mexican coke—or a flight of mezcal, if you’re not the one driving home.

They say “the only thing better than a Tico’s taco is two,” but we’ll wager that three is king. Credit: EasyBuy4u/iStock

Authentic or not, if you ever feel nostalgic for the tacos of your childhood—yup, we’re talking spiced ground beef, iceberg lettuce, and grated cheddar in a hard-shell taco—then it’s time to swing by Tito’s. An LA landmark since 1959, this old-school taco restaurant attracts hordes of locals craving their Mexican-esque comfort food. (Tito’s burritos are also famous, though that’s another article entirely.)

Where else to try cashew cheese tacos than at the incredibly delicious Real Food Daily? Credit: edoneil/iStock

Diverse as they are, tacos aren’t always accommodating to all appetites. If you’re a vegan seeking out the best tacos in Los Angeles, that’s where Real Food Daily comes in. Crispy shells come packed with wholesome, plant-based ingredients like tempeh and seasoned seitan, and are sprinkled with cashew cheese. If you have a mixed crowd, try the jackfruit street tacos: exotic enough to excite the vegetarians and hearty enough to satisfy the omnivores. Eat up.