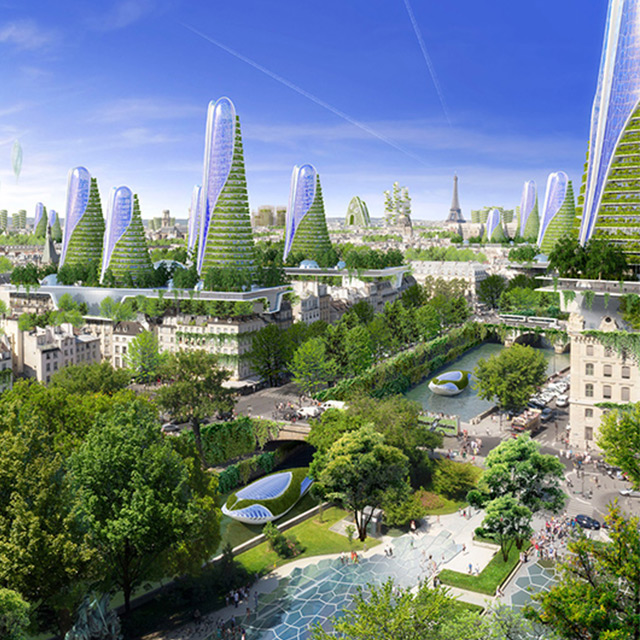 9 Breathtaking City Concepts That Could Be Your Future Neighborhood

It’s fun to imagine what the cities of the future will look like. Underwater bubble-homes? Sure. Cities that float? Why not? Houses that look like leafy trees? We’re on board!

We’ve got to give credit, then, to the artists, architects, and other creative voices who’ve dreamed up these futuristic urban visions. These city concepts span from garden bridges to self-contained biospheres and—while they probably won’t all make it past the drawing board—we’re hoping that future urban planners take note. (Seriously, we definitely want to live in a floating city.)

Whatever floats your boat may also support your home of the future. Image courtesy of Seasteading Institute.
1. THE SEASTEADING INSTITUTE’S FLOATING CITIES:

Picture it: a self-contained community that floats on water…and exists entirely off-the-grid, thanks to its sustainability and reliance on clean energy sources. Meet Seasteading Institute’s Floating City Project, which isn’t just a hallucinatory oasis. Negotiations for this project are currently underway, and the very first floating city could be unveiled as early as 2020.

If you lived in the Sub-Biosphere 2, you could host your next open house on the open water. Image courtesy of Phil Pauley/PAULEY.
2. SUB-BIOSPHERE 2:

Water isn’t just a one-time solution to urban over-crowding. It’s an idea that’s also driven innovator Phil Pauley’s Sub-Biosphere 2, which is envisioned as a fully self-contained community that floats on the water’s surface during good weather…and goes submarine when the waves get rough.

Envisioning what the world’s best-known cities will look like in 2050 is always a fun game, and this projection of Paris is, well…pretty impressive. Belgian architect Vincent Callebaut is behind the concept, which imagines antismog towers with de-polluting properties, photosynthesis towers covered in algae, and vertical farming oriented “farmscrapers.” Mmm, green.

Next up is Beijing, which gets the 2050 treatment courtesy of MAD Architects. Though the city is frequently in the news for its smog problems, the architects have reimagined the Chinese capital as a decidedly greener place. We’re particularly obsessed with these gleaming, elevated gardens. Can we get some of those near us?

It’s great to see how many of these futuristic city concepts are focused on bringing more greenery into the urban setting, and London’s Garden Bridge is no exception. A Thames-spanning walkway filled with pretty foliage, the proposed project has received planning permissions and is slated to open up as early as 2018. Fingers crossed for new, leafier commutes.

OAS1S aims to have you live in the forest, without leaving the city. Image courtesy of OAS1S.
6. OAS1S:

Ever wanted to live in a tree house? What about a house that’s also a tree? From stage left, OAS1S: one of the coolest city concepts out there. The plan envisions abodes that are inspired by and effectively function as trees. They’re oxygen-producing, sustainable, off-grid…and pretty, too.

Paris get video game-ified in this high-tech digital rendering. Image courtesy of Paul Chadeisson/Capcom.
7. PARIS OF THE FUTURE:

Created by illustrator Paul Chadeisson, this stunning vision of a futuristic Paris is awesome and spooky all at once. A cheery bistro is one of the only indications of the Paris we know; otherwise, industrial, high-tech design seems to have taken over. As this image was created for Dontnod Entertainment’s “Remember Me” video game, it probably won’t be a reality soon. (That’s okay. We really like all those bistros as-is.)

Sleep with the fishes (in a non-mob way) in this underwater vision. Image courtesy of AT Design Office.
8. FLOATING CITY:

Not to be confused with Seasteading Institute’s Floating City, this one is the work of Chinese firm AT Design Office. And they’ve really thought it out. From submarine transit to underwater entertainment centers, this is one city we’d move to in a heartbeat. Too bad it’s not real (yet).

All right, you’ve caught us; this isn’t an artist rendering but a grade-A photo. The Vertical Forest, proposed and created by Milanese architectural studio Stefano Boeri Architetti, is an example of a futuristic, super-green project that has actually made it into the real world. Let this be an inspiration, then. With any luck, the rest of these super-cool city concepts will soon become reality.