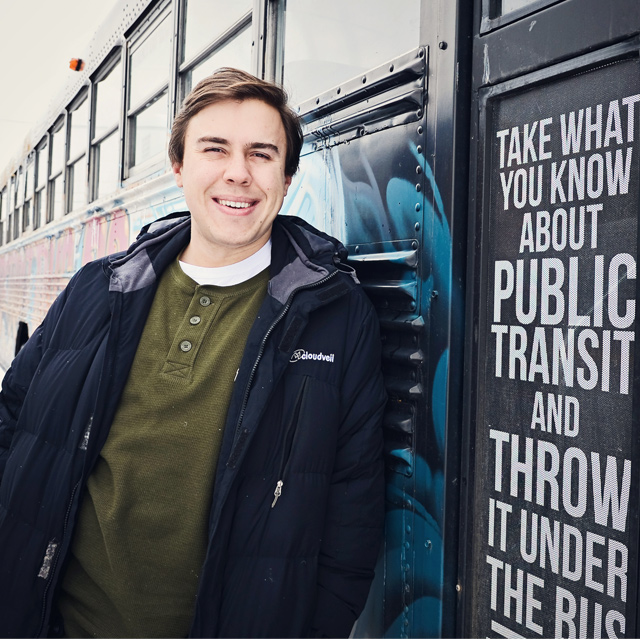 The Detroit Bus Company Gets A Stalled City Moving

The Motor City is a place where a car-free lifestyle is and has always been all but impossible. Last year, Detroit became the largest city in the US to file bankruptcy, prompting officials to significantly reduce or completely shut down many popular bus routes, leaving those who relied on public transportation without many options.

Enter Andy Didorosi, a college dropout-turned-entrepreneur, who’s helping to change the face of transportation in his hometown. In 2011, Andy was actively lobbying for the city to introduce a light rail system when a headline in the Detroit Free Press (“Light-Rail Plan Scrapped...”) drove him to action. Andy knew that people in the area wanted—needed—an alternative way to get from point A to point B. So he bought six buses, equipped them with electronic trackers, and the Detroit Bus Company was born.

Zipcar chatted with Andy about his vision for making Detroit a better place to live by improving access to transportation.

Zipcar: What’s the biggest challenge you face and how do you overcome these obstacles?

Andy: Transit hasn't really been improved much in the U.S. in the past 30 years. The country still relies mostly on straight-line, route-based transportation and almost exclusively on buses—and transit systems have traditionally been heavily subsidized by the government—sometimes up to 95%. As a small, private company, we don't have access to that capital, which has forced us to be really innovative. Technology has been our ace-in-the-hole and Smartphones have brought a whole new dynamic to a really old industry. We use technology to connect better with our riders about the transit they want—and we try to fulfill as many needs as possible.

How has your vision evolved over time?

We started with one service, our weekend express, which gives suburb-dwellers a way to experience cool stuff going on downtown without having to worry about driving. Then, in 2012 we launched the Youth Transit Alliance (YTA) program through which we give kids free rides to and from more than 90 after-school and youth-development programs in the city.

It’s amazing how quickly a small organization can pivot to find their calling and provide a valuable service; especially in such an odd space to be a private company—like transit in Detroit. Our busiest service today by far is the YTA.  Second would be our charters: companies are always looking to get into Detroit and see what's going on. Usually their first foray is a field trip into the city with their employees. We love being part of that initial connection and spark.

Technology has been our ace-in-the-hole and smartphones have brought a whole new dynamic to a really old industry.

How do you measure the impact you’ve made on the community?

We believe that giving young people access to the programs they need to thrive will have a positive impact on the neighborhoods for years, as they bring skills and success back to the areas they came from. Detroit has been around 300 years and is on a slow climb, a crawl even, back upward through thousands of tiny little enterprises. We're really just part of one great anthill of progress that doesn't have a start or an end.

We noticed that like our cars, your buses have names. What’s your favorite?

Names matter! Our buses are near and dear to us, and we like to call them by name. Lochness was named through an Internet contest. Silver Bullet named itself because it looks like a Bob Seger album cover on the inside. We named our first bus, Bettis, after the [famous halfback] Jerome "The Bus" Bettis who hails from Detroit. We haven't managed to get him to come aboard yet though. Maybe you can help.

What’s next for Detroit Bus Company?

We're working to make more and more connections in the city we love. We're trying to bridge all the gaps we can by using technology and good customer service. Expect more services from the little bus company that could.

Read more about the inspiring things Andy is doing with the Detroit Bus Company at TheDetroitBus.com and YouthTransitAlliance.org. His 2012 TED Talk is also worth a watch.