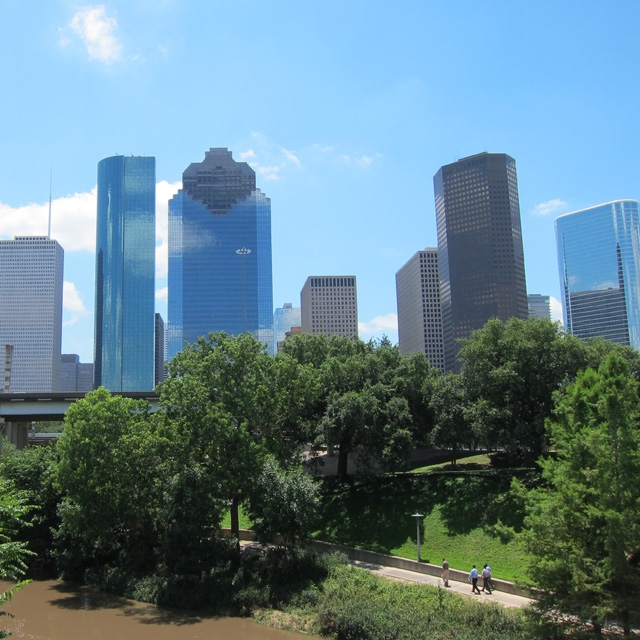 Houston: We Have An Energy Solution

When it comes to Houston, many people associate the Texas city with traffic, sprawl, heat, and humidity. So it might surprise you to discover that Houston is home to a growing bike sharing program, is a leader in energy-efficient buildings and LED street lighting, and is the largest municipal purchaser of renewable power in the United States. True story.

A CITY ON THE MOVE

Sustainable growth isn’t just a perk; it’s essential for a city like Houston, which has led the nation in job recovery since the recession. Houston already accounts for 23 percent of the population of Texas, and the Houston-Galveston Area Council forecasts that the population could more than double by 2050.

That’s where Houston’s renewable power players—Mayor Annise Parker, Laura Spanjian (Director of the Mayor’s Office of Sustainability), and Sustainability Manager Lisa Lin—come in. Together, their department supports initiatives, policies, and programs that encourage energy efficiency, build resiliency in the community, and improve quality of life in the city. (Y’know—no big.) Among their major areas of focus are transportation and building energy usage, which are two of the largest producers of greenhouse gases in a city that is hot and geographically vast.

So how does such critical change begin? “One thing we try to do,” says Lin, “is to look at some pilot programs that are happening elsewhere and see where we can realistically apply them to life in Houston. For example, we just completed the first dedicated bike lane on Lamar in downtown Houston; we hope that this type of infrastructure project will encourage people to start thinking about biking and showcase the growing variety of bike facilities we have around town.”

It’s a trend that’s only just beginning, but is already lassoing in key partners. Case in point: On the day we met, Lin had just returned from an educational event organized by the Office of Sustainability about redefining transportation in Houston. In attendance: a dream team of engineers, business leaders, non-profit organizations, and urban planners, all eagerly engaged in a workshop and information fair that promoted new transportation options for people to move around the city.

Make way for bike lanes, starting with this first dedicated one in downtown Houston.

With such a huge populace—covering such a large geographic area—transportation is a pivotal issue. More than 2.3 million residents (that’s almost 80 percent of the workforce) currently drive to work…alone. Their mean travel time is thirty minutes. That’s a lot of cars on the road, and a lot of emissions.

Lin says that ride sharing, expanded hike and bike pathways, and using electric vehicles are just a few of the many ways that Houstonians can reduce traffic, save money, and cut emissions. In addition, Houston METRORail is expanding from seven to nearly 23 miles with the addition of three new rail lines. And the $480 million Bayou Greenways initiative will add 4,000 acres of new, equitably distributed green space that will not only function as a flood and storm water control system, but will also provide space for 300 miles of continuous off-street hike and bike trails.

When it comes to ride sharing, “Zipcar is another thing we promote as a viable transportation option for people working in the city,” she says. “It’s part of a menu of options; you have both sides of the spectrum. You have people who want to live car-free, or perhaps it’s helping people feel comfortable knowing that if they carpool or take the Park & Ride to work—but need to leave the office for a meeting or appointment, for example—that a service like Zipcar is in place, so they don’t need their own vehicle to do that.”

It’s a concept that’s already enthusiastically embraced. City employees use similar technology with Houston Fleet Share, which allows them to make reservations online and gain access to the City’s electric vehicles, without the need for keys or on-location personnel. “We’re a huge fan of it,” says Lin. “For shorter trips, we’re encouraged to use the Nissan Leafs we have in that vehicle pool, and we’ve estimated around $110,000 in annual savings.”

Thanks to three new rail lines, Houston’s METRORail will cover triple the distance.

What happens if a city like Houston doesn’t grow in a sustainable way? “Potentially, I think companies might be more averse to doing business here,” says Lin. “That was something some of the panelists from the business community were talking about at our event, that they are very sensitive to prospective employees’ perceptions about quality of life in Houston. If people don’t want to live and work here, we could be missing opportunities to attract the best and the brightest to our city. Oftentimes, there’s a kind of reactive thinking that hinders good planning. We want to be proactive in our thinking about what citizens will want years down the line.”

And what can ordinary Houstonians do to help make the city a more sustainable place? “If they could try a different mode of transportation,” says Lin, “whether carpooling or vanpooling or biking, it cumulatively could make a big difference. Sometimes it’s the first step that’s the biggest challenge. If people would try something new, they might find that not only is it not that hard, but it could also save them time and money.” We’ll zip to that.