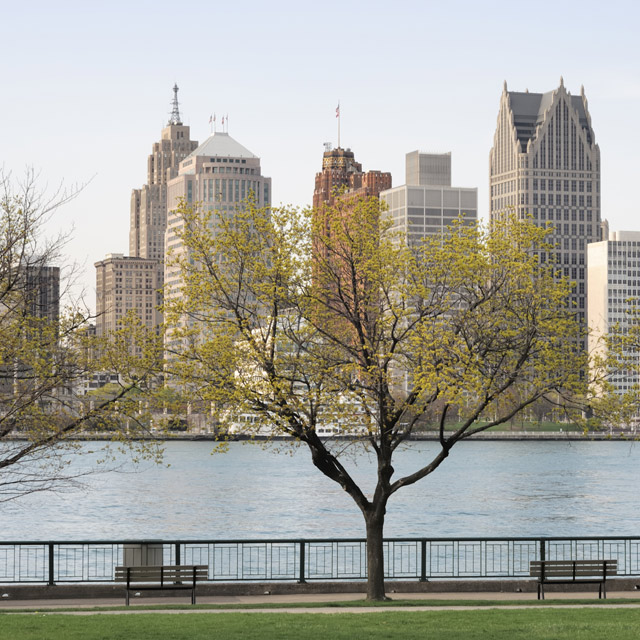 How Detroit Is Repurposing 78,000 Vacant Buildings

During the 1940s, the city of Detroit was a sought-after address. The post-war economy brought a boon to the city’s thriving auto industry. Swanky neighborhoods such as Boston-Edison and Indian Village were filled with executives and celebrities, and by the 1950s, the city’s population had swelled to more than 1.8 million. A decade later, another cultural renaissance emerged, with the Motown sound topping the charts.

Then along with prosperity, crime and corruption moved in. Over the next few decades, the city’s landscape slowly decayed and more than a million people gradually exited the city, leaving Detroit’s 139 square miles dotted with abandoned houses and shuttered businesses.

But the Motor City didn’t quiet its engines for good. Detroit is in the midst of a major comeback with residents rallying around revitalization efforts that have picked up steam since the city emerged from bankruptcy in December 2014.

One of the first things on the agenda: The removal of 78,000 vacant buildings classified as “blight,” which is any damaged or abandoned building considered a public nuisance because it’s unsafe or attracts illegal activity. So far, the city has torn down nearly 4,000 of these structures and plans to remove 3,300 more by the end of 2015.

Just as one man’s trash is another man’s treasure, blight is considered an asset by proponents of deconstruction, a growing movement that recovers reusable materials from structures instead of simply tearing them down.

Helping remove the eyesore properties are deconstruction leaders like Reclaim Detroit, whose mission is to divert as much building material from landfills as possible. And the process benefits more than the environment. Deconstruction creates jobs for residents who are out of work, and provides training and a stepping stone into careers in construction.

Deconstruction also protects architectural heritage. While demolition can be completed in a few hours, a deconstruction team takes three days to methodically remove and preserve materials such as nails, wood, and windows. But it’s worth the effort.

Reclaim Detroit’s Executive Director Craig Varterian says his organization dismantles 10 to 20 homes per month and is struggling to keep up with demand for the materials: “We’ve got artists, architects, designers, people who are environmentally conscious, people who are rehabbing their homes and have an interest in these design elements, and things just started accelerating,” he said in an interview with USA Today.

Varterian said Detroit’s blight problem is like thousands of acres of forests sitting inside homes, where floorboards and joists were made of prized timbers such as maple, walnut, hickory, fir, and chestnut. Through deconstruction, this reclaimed lumber can make its way into Detroit restaurants and businesses, where it can be appreciated once again. In fact, most of the wood is stamped with the original address to honor its sense of history.

Now, take a peek at several community businesses that have incorporated deconstruction into their structures.

When James Cadariu launched Great Lakes Coffee Roasting Company on Woodward Avenue in 2011, he was intrigued by the idea of using old lumber. “This material, this wood they’re saving, it all has a story to tell,” he told USA Today. “It’s so much a part of the city. That’s what I really liked about it.”

Cadariu used the wood to cover floors and walls, and to construct a bar in his coffeehouse. He was pleasantly surprised to learn some of the available wood had been rescued from a home two doors down from his uncle’s house, where he visited as a child.

Two miles away at Standard Barber Company on Cadillac Square, co-founders Steve Economy and Matt Temkin found it fitting to outfit their old-fashioned business—where you can still get a shoeshine and a razor shave—with old-but-fashionable materials.

Counters were made from marble that had been removed from Newberry Hall, a former residence hall for nurses. And reclaimed lumber was used to build cabinets and floors.

In Corktown, one of the city’s oldest neighborhoods, Two James Spirits is yet another local business using reclaimed wood in its interiors. David Landrum and Peter Bailey, owners of Detroit’s first licensed distillery since Prohibition, felt the materials fit with the company’s environmentally conscious mission, which includes utilizing a water reclamation system, locally sourcing rye for its whiskey, and donating spent grain to local farmers for compost or animal feed.

A BRIGHT FUTURE, RISING FROM THE ASHES

These success stories are just the beginning of Detroit’s comeback. (Just look at revamped spots like the Fort Shelby Hotel and the Westin Book Cadillac Detroit for a glamorous reminder.) A renewed energy is attracting entrepreneurs and residents to Motor City once again.

Fittingly, Detroit’s motto is “Speramus meliora; resurget cineribus,” which means “We hope for better things; it will arise from the ashes.” Established in 1805 after a fire nearly destroyed the city, these words ring true today. Especially to the 700,000 people who call “The D” home.

If you like this, check out the rest of our series: Changing City Landscapes. We’re chronicling elegant examples of urban adaptive reuse, where cities like New York and Pittsburgh transform dated structures and materials into valuable community spaces.