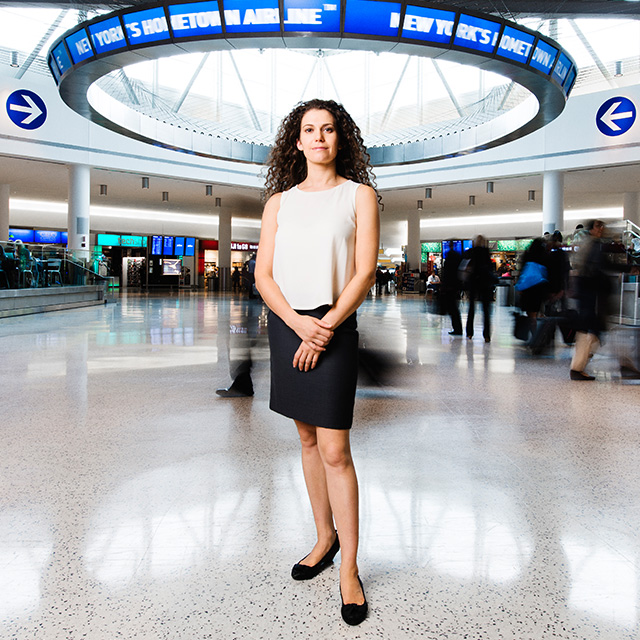 For JetBlue, Eco-Awareness Isn’t Just a Pie in the Sky

Before Sophia Leonora Mendelsohn became the Head of Sustainability at JetBlue, she worked at factories in China and realized how the things we buy connect us to the places where they’re made, even if they’re halfway around the planet. That fueled her passion for preserving water and air quality, which ultimately landed her in charge of eco-conscious efforts for the major airline. So how does an industry practically address its impact? With sustainable values, complete (and refreshing) honesty, and a drive to do better.

Sophia works to make JetBlue stand out as a leader in sustainability.

Zipcar: The consumer airline industry is a more recent field of transportation. How has it changed since the ’60s?

Sophia: As aviation began to take hold in the American landscape, it was a luxury and a novelty. Now, thanks to incredible technological improvements, it’s something most people can do much more frequently than they ever have before.

There’s the assumption that flying is easy — and the reality is, it’s not. Whether it’s a meeting someone doesn’t want to go to, or the greatest vacation, it takes a heck of a lot of jet fuel to get someone from A to B. Every flight that gets up and lands safely is a testament to human ingenuity and technology. I always think that when we see an airplane go up in the air, it should remind us that human innovation can solve technological, social, and environmental problems.

I do believe that we will see an international commercial aviation sector running off low emissions biofuels in the near future, and even electric and solar in the distant future.

I don’t expect to be alive to see it, but I still feel it’s my obligation to fight for it and prepare for it. In the meantime, airlines have dramatically increased the fuel efficiency of engines to save fuel and reduce emissions — a social and financial win-win.

I am the first full-time crewmember fully focusing on sustainability at JetBlue. The strategy is to really integrate sustainability into JetBlue’s business model.

When it started, we wanted to focus first and foremost on a category that our crewmembers were very passionate about, which is waste management. Growing from there, we began to think, what should the pillars of our strategy be? What should we be asking ourselves to form that strategy?

What are JetBlue’s strategies to solve waste management?

So the first question is, where’s our biggest impact? It’s the emissions from our engines. So we have to talk about climate change and airplane engine emissions. And then we asked ourselves, where are the greatest risks to our business model from environmental degradation? And we looked at where we fly, and we saw that without a beautiful Caribbean, without pristine clean, clear beaches and shorelines, quite frankly, not as many people would be getting on our planes. The tourism industry is beholden to having beautiful, interesting places for folks to want to visit. Part of that is cultural and a really big part is the clean, beautiful environment. Folks do not get on planes to go see factories, they go see national parks. They don’t say, “You know what I’d really like to do? Hang out in a trash-strewn parking lot. That sounds awesome.” They go to the beach.

What are your favorite initiatives that JetBlue is running currently?

One of my favorites is what we call EcoEarnings: A Shore Thing. We know that no one benefits when oceans and beaches are polluted. Tourism doesn’t grow, economies don’t prosper, and no one has a good vacation. Yet plastic in our oceans and water pollution remain a significant problem. So knowing that no one stands to gain from this — no one makes money, it’s not a political issue — why is this still a problem?

I believe that it’s because of the difficulty in connecting profit to ocean and shoreline conservation. So one of the things we’re doing is really trying to put a dollar value per ticket on the revenue that these beautiful destinations help bring us. We are saying, “Hey, we admit we don’t go it alone, we are standing on the shoulders of giants and those giants are the beautiful ecosystems that the Caribbean has been graced with.”

Tell me more about how JetBlue has been partnering with the Ocean Foundation. How do you work with them?

The Ocean Foundation comes in to guide us. We did donate both financially and with travel certificates to The Ocean Foundation, so that the scientists they support can travel without taking budget out of their research grant. Instead, that money can fully go to their scientific work.

Has JetBlue helped changed airline travel for itself by influencing other companies?

Even though sustainability is a competitive advantage to us and other competitors, a rising tide lifts all ships. We all motivate each other. Each bit of success and progress from another airline makes my job easier, and harder.

Where do you see the airline industry heading in the next 10 years?

I couldn’t predict the next 10 years, but I’ll draw on inspiration from my unlikely environmental hero, Henry Ford. He famously said, “If I asked them what they wanted, they would’ve said a faster horse.” It’s not about what we’re demanding now, it’s about innovators and scientists and funders and politicians coming together to make possible the advancements for the next 10 years. To go from horse-drawn cart to automobile to electric car, there will be folks out there who doubt our ability to make progress, but the revolution happens slowly, quarter by quarter. We’ve seen it form and transform the aviation industry and this is just another step in what the industry has been doing for 100 years.