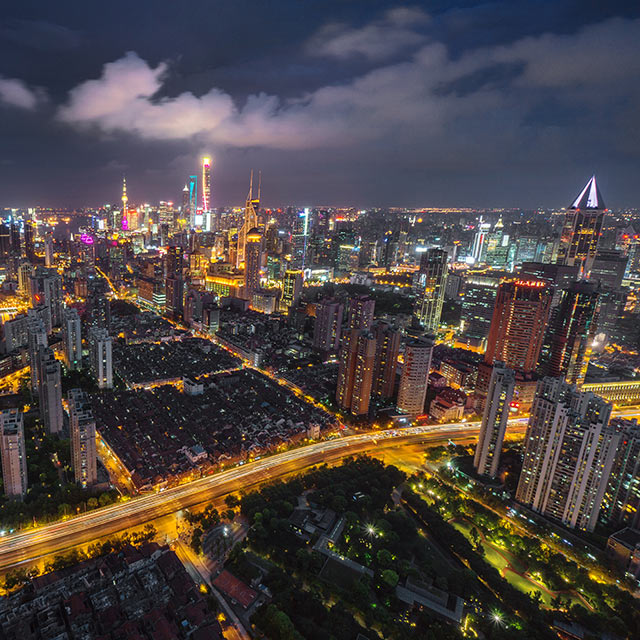 Yup, livin’ large is great, but when it comes to the next shift in urban life—megacities—there’s a lot to be cautious about, too.

WHAT MAKES A MEGACITY?

Shanghai’s nearly 25 million people make it one of 31 megacities worldwide—and more are coming.

In 2016, an estimated 54.5% of the world’s population lived in urban settlements. By 2030, urban spaces are projected to house 60% of people globally. (That means one in every three people will live in cities with at least half a million residents. Whoa.)

But while your city may feel huge (and will only get more populated in the years to come), is it a megacity? Well, most megacities are currently in the global South and less developed regions—but there are currently 31 worldwide (boasting more than 10 million residents), and the number is slated to grow to 41 by 2030. So if you don’t currently live in existing megacities like New York, Los Angeles, or London—but plan to put down stakes in Paris one day—then mega status could be in your city’s future.

But megacities aren’t just born; they’re also made. The interconnection or merging between large metropolitan areas—in part thanks to advances in infrastructure—has led to the uptick of megacities. This has turned cities that were once hundreds of miles apart into conglomerates, the largest of which is Japan’s Taiheiyo Belt. It’s also led to Chongqing, a collection of urban outskirts in China that spans an area the size of Austria—but has a larger population than Australia.

American multi-city clusters are also in the mix. There’s the East Coast corridor (Boston through New York to D.C.), which serves as America’s academic, financial, and political hub. And the innovative Silicon Valley, from San Francisco to San Jose, counts, too. And finishing off the trifecta is Dallas–Fort Worth. As the largest urban cluster in the South—and home to Exxon, AT&T, and American Airlines—it bolsters an economy larger than South Africa’s. (Guess everything really is bigger in Texas.)

With so many people in concentrated spaces, sustainability isn’t just a consideration; “survivability” is also a critical issue.

This means the realization of concepts like “floating cities” built up to accommodate rising sea levels, as well as an upswing in upcycling to reuse and repurpose waste materials. (Of which there are many, highlighted in a recent “Megacities Asia” exhibit at Boston’s Museum of Fine Arts, where compilations of refuse objects encountered in everyday life—like dishes, doors, and plastic bags—became immersive sculptures.)

Unfortunately, the environmental risks far surpass what’s just visible to the eye in the form of trash. A majority of city dwellers live in cities that face high risk of disaster-related mortality or economic losses. Of the 1,692 cities with at least 300,000 inhabitants in 2014, 944 (56%) were at high risk of exposure to at least one of six types of natural disasters (cyclones, floods, droughts, earthquakes, landslides, and volcano eruptions). And around 15% of cities—most located along coastlines—were at high risk of exposure to two or more types of natural disasters.

While natural disasters fall on the, well, disastrous side of the spectrum, daily life in megacities can lead to other health risks. Disease, urban violence, unsafely built environments, and road-related injuries are at the top of the list, leading to life expectancy falling nearly 7 years below the national average. Yikes.

And then—as would be expected with so many people in one place—pollution takes a toll. In India, where Delhi is the most polluted city (as reported by Greenpeace India’s report, “Airpocalpyse,” where none of the 168 cities monitored met WHO’s air quality standards), restrictions are in place for construction work, as well as the usage of diesel generators, brick kilns, and stone crushers when Particulate Matter (PM) reaches certain levels. Sometimes schools and businesses close, and flights and trains are cancelled, as well, when a walk outside for some fresh air isn’t just impossible, it’s outright hazardous.

One particularly striking example: Lagos, the largest city in Nigeria, clocks in with an estimated 16 million residents. Globalization and mass media attract Nigerians there, in hopes of finding a stimulating metropolis akin to New York or London. Not only is the West African countryside becoming depopulated as hundreds of thousands head city-ward, but now the overcrowding has led to little privacy (as in seven to eight in a shared room with bunk beds—if they’re lucky enough to have a space indoors to sleep), squatters, and only .4% of citizens with toilets connected to a sewer system.

Although one of the positive draws to megacities is the prospect (though not the guarantee) of increased job opportunities, a direct downside is that one’s commute can become a daily trial. Almost half of commuters in Mumbai take at least one to two hours to get to work due to traffic congestion; in Lagos, five-hour “go-slows” are common, causing workers to wake up before dawn and spend hardly any waking time at home.

In Delhi, the “odd-even car rule” is in effect, where vehicles with license plates numbers ending in an odd and even digits alternate road days. When air quality is particularly poor, parking fees for private vehicles are increased 400 percent, to discourage drivers from using their vehicles unless absolutely necessary. (We admit, driving less is one idea we can get behind, in any city.)

GOING (AND GROWING) FROM HERE

Tokyo—and other megacities—will be balancing opportunities for economic growth with issues of sustainability.

Clearly, the downsides of megacities are well-documented—and will only continue to grow, along with megacities’ burgeoning populations. But can anything positive emerge?

Perhaps. Academics, scientists, and environmentalists are eager to determine what kinds of business opportunities, infrastructure, and technology innovations can be created and implemented to raise the economic statuses for those in need, and for the landscapes (both physical and environmental) they call home.

In addition, the main draws to megacities—economic opportunity, proximity to areas of growth, political stability, and attractiveness for foreign investment—may well come to fruition in some cases.

To wit: The most population-dense areas in the world represent the largest percentage of national GDP, and often serve as global hubs. In fact, the world’s top 20 richest cities are currently home to more than 75% of the largest companies. McKinsey Global Institute research suggests that from now until 2025, 1/3 of world growth will come from the key Western capitals and emerging market megacities (with 1/3 from the heavily populated middle-weight cities of emerging markets, and 1/3 from small cities and rural areas in developing countries).

So if the next great high-speed rail project takes root in a megacity, don’t be too surprised. And also be relieved at the traffic congestion it’s sure to ameliorate.