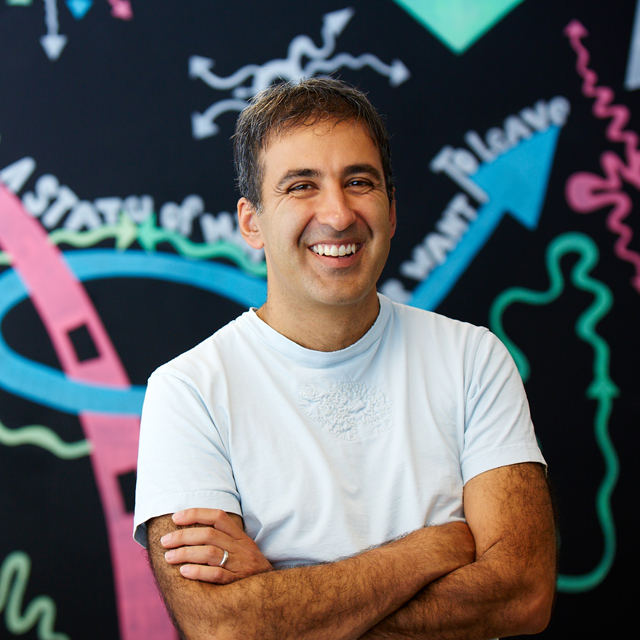 In the age of big data, it may seem like life is being reduced to a mere series of numbers. Shouldn’t our world be represented in measures that we find relatable? According to Sep Kamvar, director of the Social Computing group at the MIT Media Lab, the answer is yes.

Sep has the kind of all-encompassing resume that proves he knows his stuff: He studied at Princeton and Stanford, had a project commissioned by New York's Museum of Modern Art, and wrote a programming language. And when he created his own search engine in 2003, Google quickly acquired the company and put Sep as the head of personalization. (Not too shabby.)

In 2012, Sep left California for Massachusetts to start at MIT, where he continues his journey to bring humanity back to computer science. We sat down with Sep to discuss his latest work, the You Are Here project, which promises to make 100 maps each of 100 different cities — documenting everything from transportation to graffiti — and to eventually make tools for people to create these kinds of maps in their own cities.

Zipcar: How did this project start?

Sep: It started, actually, moving from San Francisco to Cambridge, and noticing that the cities are quite different. I started paying attention to why they were so different and it was really hundreds, thousands of little microdecisions that were made — and there was no effective record of these decisions. If you look at a map, you don’t see any of this; you basically just see the roads and the buildings, but these have a huge impact on the qualitative perception of the city and, more importantly, what life is in the city. I wanted to start documenting these little microdecisions and I thought it would be nice to do it through maps—to make 100 different maps each of 100 different cities.

You began with “Bicycle Crashes in Cambridge.” What influences your choice of topics?

It’s a wide range of things. The biggest, I think, is a personal sense of feeling. There’s this wonderful architect named Christopher Alexander, who wrote a book called “A Pattern Language,” which has been very influential on me and on our lab. He was in an interview and somebody had asked him, “How did you go about writing ‘A Pattern Language’?” and he said, “You know, we treated it like any other empirical science. We would go out, we would see how something made us feel and then we would report that for 90% of things, they will make people feel emotionally in a similar way.” Individually, if there’s something that feels that it’s important, feels that it has an effect on the city, that’s the key that there’s something interesting there. So bicycle crashes, we did because I feel very stressed biking to work.

Do you expect certain reactions from your maps? Do you ever try to frame them in a certain way?

Absolutely. The big frame is to give people a clue of something that they can do. For example, we have a map of trees, where we use Google Street View and image recognition to recognize where all the trees are and make a map of street greenery. When you see that map, you see places that are lush and you see places that are barren, and it suggests to the viewer, that, “Well, I might plant a tree here.” And that’s exactly the hope that I have with these maps, is that they inspire people to action so that they become maps that heal themselves.

You said you hope that these maps become “maps-that-do” rather than “maps-that-show.” Could you elaborate on that?

One is what I’ve mentioned, which is that it inspires people to action. The other is that it provides a framework by which people can more easily act. To use the tree example, it would be wonderful that not only might it suggest to you that you plant a tree, as it already does, but if you want to plant a tree, it will give you the tools to broadcast that you want to plant a tree here and get other people to help you. It might suggest these are the top spots which could use tree planting for air quality remediation, and so on and so forth.

At Zipcar, we were very interested to see your map about the Best Mode of Transportation. We see ourselves as part of the transportation matrix, because you have different needs for every use case. What was surprising to you about that?

Some things were surprising to us. For instance, Portland, OR, is fastest traveled by car, but it has a really big biking culture. What do you think it takes for people to choose a different method even though it’s not fastest?

I think the answer is more complex than I’ll be able to answer quickly, but I’ll say that these changes don’t happen linearly.

Ten years ago, nobody was biking on the streets of Boston or New York. The non-linear nature of these changes suggests that more people doing it, inspires more people to do it.

How do you ideally see these maps being used by policymakers, as well as citizens?

I hope that policymakers use this as part of their arsenal of tools that they use in order to help to plan cities. My bigger hope is that it puts these powerful tools in many more hands, so that people don’t think of themselves as a consumer of a city that somebody else has planned, but they see themselves as one of the creators of the city. Cities that are created by people end up being more livable by people.