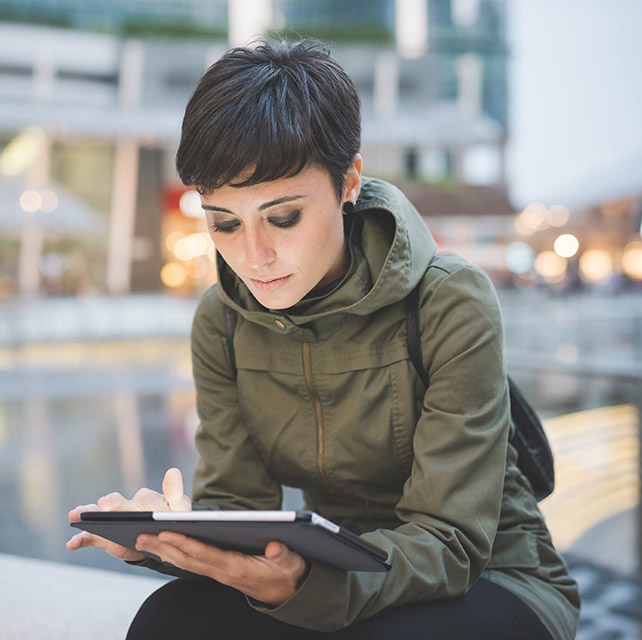 When the world was driving around in VW buses, the Jetsons sped along in flying cars. When teenagers were picking up on the brand-new technology of the compact disc, Marty McFly was time-traveling. Science fiction books and movies illustrate a futuristic world, often with technology so imaginative it’s nothing short of make-believe. Turns out, some of those pie-in-the-sky ideas actually…came true. Take a look at some of today’s everyday technology that was accurately predicted in sci-fi.

Kubrick’s 2001: A Space Odyssey “proved” that the concept for the tablet came long before Samsung or Apple went to court over it. Image courtesy MGM studios.

There’s hardly a tech-happy sci-fi movie that doesn’t involve some type of digital screen or mobile device, even though many of them predate the smartphone. For decades, films were way ahead of their time, depicting video chats, handheld devices—and most notably, the tablet. It’s a relatively new technology, but a hotly debated one. As Samsung and Apple were fighting patent lawsuits over the Galaxy Tablet and iPad, the case took a turn when someone presented the (disputable) original source of the idea: Stanley Kubrick’s 1968 film, 2001: A Space Odyssey. A clip shows two astronauts eating breakfast while watching videos on flat-screen tablets. They got it almost exactly right, down to the narrow borders and slim design of today’s models. Jury, take note.

The Disney Channel (yes, the Disney Channel) predicted the future of home automation with a robot called PAT. Unlike the Amazon Echo, PAT also wants to test your blood… Image courtesy Amazon.

One of the most recent technologies was actually predicted by none other than a 1999 Disney Channel Original Movie. The “Smart House” is run by PAT (short for Personal Applied Technology), a robot that can receive voice commands and control settings or perform chores. PAT can set the temperature of the house, make phone calls, and learn voices. Having a party? She’ll start the music. She learns the behaviors of her tenants, adapting dinner menus and other factors as needed. Sounds a lot like the Amazon Echo, a home device (named Alexa) that understands questions and acts in connection with a variety of devices, like lights, a Nest Thermostat, and the entire Amazon Prime library. One PAT ability that Alexa can’t yet do? Take blood samples. Uhh, yeah, we’re okay with that.

Snowpiercer foretells the main ingredient that gives this futuristic food of today the protein to keep you buzzing. Image courtesy exo.

Based on the 1982 French graphic novel, Le Transperceneige, the film Snowpiercer is set on a train carrying the last survivors of a post-apocalyptic world. The inhabitants of the back car, later shown to be living in the most squalid conditions of the whole train, eat nondescript blocks. As the lead character makes his way forward, he finds the true ingredient of the sustenance: bugs. Well, those creepy-crawlies are making their way into modern-day food, with trailblazers like Exo protein bars and Six Foods chips made with none other than cricket flour. With the impressive protein content and surprisingly eco-friendly production (cricket calories require a lot less water to manufacture, compared to beef), you can expect to see more of this six-legged nutrition in the future.

Probably the one thing so many sci-fi films could never guess is in the future, wristwatches would almost die out…until they did everything and *also* tell time. Image courtesy Apple.

When Samsung launched the Samsung Galaxy Gear, the company was the first to admit that the idea was nothing new. With a montage of clips as far back as the 1940s, we saw numerous instances of a watch-meets-walkie-talkie-meets-computer device. Characters made calls, watched video, and yeah, probably checked the time, on their futuristic doo-dads, in shows from Star Trek to Inspector Gadget. Fast-forward to 2016, when the aforementioned Samsung Galaxy Gear and newer Apple Watch have apps for everything from exercising to car sharing. When it comes to the smartwatch, it’s not about when it first appeared—it’s about what took it so long to become reality!

Yes, Harry Potter is technically fantasy, not science fiction, but that doesn’t preclude it from predicting technology. When readers were introduced to the idea of Harry watching his parents wave hello from a framed photograph, it was a thing of magic. Now, the Microsoft Lumia phone has Living Images and the iPhone 6 launched Live Photos, both of which capture a second before and after you snap a shot to create a mini video of movement. And online, it’s all about GIFs. A picture is now worth a few thousands words.

Very soon, advertisements will tell you why the car you are literally driving right now is inferior. (It’s obviously not a Zipcar.) Image courtesy 20th Century Fox.

In the over-surveillanced world of Minority Report, billboards employ retina scanners to identify the people passing by them. As Tom Cruise speeds through a crowded walkway, a digital screen addresses him by name and tells him he needs a Guinness. Creeped out? Well, it’s coming to you. Programmatic digital advertising already uses information about you to serve up relevant ads (like when you were browsing new furniture and suddenly your newsfeed is full of ads…for that same couch). Now, advertising companies are developing just that. General Motors created a billboard that identifies the car models driving by and modifies the message to point out why their features are inferior to the Chevy Malibu. Coca-Cola and Burberry allowed consumers to submit their names and see them up on real billboards. Clear Channel recently released a program called Radar, which gathers third-party data to identify consumer segments and target based on location and time of day.

The 1973 thriller, Soylent Green, centers around an overcrowded world (set far in the future year of—welp!—2022) that survives on food rations. Although the creators insist that the green protein is made from plankton, a harrowing investigation finds that it actually consists of humans. (“Soylent Green is people!!!”) Today, folks can fuel up with the (questionably named) Soylent. Fortunately, it’s vegan, and it packs a heavy nutritional punch in a small package. The minimalist Soylent Drink contains 20% of a person’s daily nutrition (and 0% of a person). The Soylent Bar mixes soy protein, algal flour, and various vitamins for a caramel-flavored snack. Think it’ll never catch on? Soylent Powder is currently on backorder.

Microsoft’s holoportation technology will soon let you ask Obi-Wan Kenobi for help as if you are there in person. Image courtesy 20th Century Fox.

The Star Wars trilogy starts out with Princess Leia’s plea (“Help me, Obi-Wan Kenobi, you're my only hope”) delivered by hologram via trusty sidekick R2-D2. Turns out, the semi-transparent projections are catching on today. Microsoft researchers recently showed a demo of their new technology: holoportation. With the help of cameras and sensors, your friend who’s miles away can appear in the room as a hologram. It’s nowhere near ready for everyday, widespread use, but it’s pretty freaking cool. Until then, we’ll have to remember that surreal performance by Tupac at Coachella 2012.

We hope the “self” in the self-driving car means we don’t get a creepy robot cabbie sitting in the front seat. Image courtesy Google.

Total Recall may have blended the line between dreams and reality, but it got one thing right: autonomous cars. When Arnold Schwarzenegger hops into a Johnny cab, he’s greeted by an automated driver that controls the wheel. We all know that driverless cars are coming soon—already on the road, in some cases—and the next step will likely be driverless car sharing. Need to get across town? The car will come to you, not the other way around. Now that’s a time when we’re happy to take the back seat.