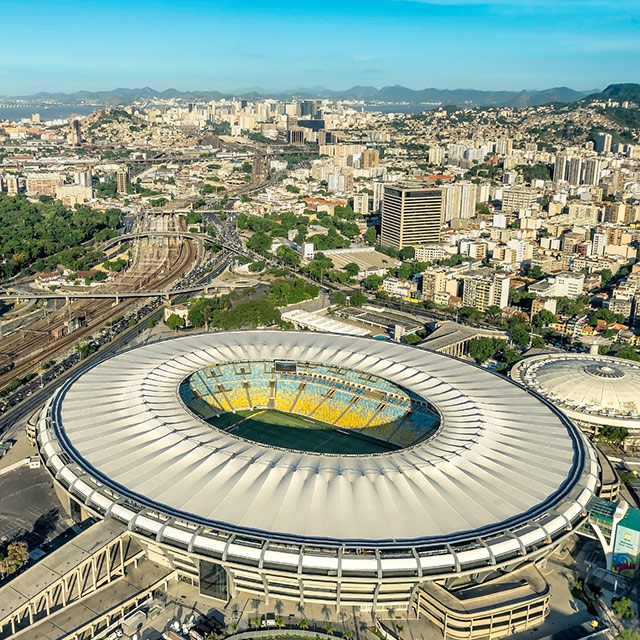 Rio, the Olympics, and the Crazy Worldwide Traffic Game

You’re sitting in four steamy lanes of motionless traffic, backed up as far as the eye can see. Spread out before you is the mesmerizing Rio skyline, arranged against an impossibly blue sky, and your soundtrack is the whizz of mopeds cutting in and around the thick of bumpers, the occasional toot of a friendly horn, and the chuckles of the person beside you, who is recording the whole scene.

A quick YouTube search for “Rio traffic” brings up countless videos, with titles like “Crazy traffic in Rio de Janeiro, this is how we drive” and “Common Day in Rio de Janeiro, crazy traffic LOL.” But, with the Olympics only weeks away, and the city scrambling to finish up a key leg of its unprecedented transportation infrastructure overhaul, not everyone in Rio is laughing.

A BOLD PLAN, BUT NO EASY FIX

After enduring decades of increasing congestion in a densely populated city that also happens to be one of the most visited in the southern hemisphere, Rio's embattled transportation system is in the throes of an enormous re-imagining that began in preparation for the 2014 World Cup and has continued in anticipation of the Rio 2016 Summer Olympic Games.

Alongside a slew of related transportation investments, the hallmark of the project is a stunning effort to demolish the aging, elevated Perimetral highway and replace it with a state-of-the-art highway and tunnel system—one that is promised to accommodate 10,500 vehicles an hour. The 15-year undertaking (set to complete in the early 2020s) is a bold move with a lot of complications and a very significant price tag, and the many cities around the globe struggling to find their own congestion solutions are sure to be keeping an eye on the project's benefits, costs, and consequences.

As happens with any major construction, it is clear that the effort to smooth the way for Olympians and their fans has wreaked havoc for at least some Rio locals, for whom traffic headaches were already a part of everyday life. With progress comes pain, and the road closings, detours, and interrupted bus routes have not helped traffic in a city where people were already spending 47% more time on the road during rush hour, compared to times when roads are not as congested. (Some locals report commutes as long as three hours. Each way.)

Rio doesn’t look quite as majestic when you’re stuck in jams like this.

Rio is, of course, far from being alone in the struggle for traffic sanity. The foundational reason for this global issue is simple: Many of the world's major cities simply weren't built for cars.

The excellent podcast titled “Suburbia” from Colin Wright's “Let's Know Things” series beautifully describes the physical feeling of navigating, by car, communities that grew up around commerce and social interaction long before the automobile. So many of our urban centers sprang up well before the Model T, and were built for pedestrians and those commuting by actual horsepower. That means cities from Bangkok to LA, Vancouver to Istanbul, are all tangled up in their own “big mess.” Progress, growth, and change are butting up against these roads that were made for walking.

And the costs go beyond wasted time. While we might, historically, have recognized traffic as the mark of a bustling economic center, congestion limits a city's accessibility, wreaks environmental havoc, and stresses out individual drivers.

What one of the tunnels looked like in March 2015; a vision of a planned tunnel that will alleviate maddening traffic. Images courtesy of Wonderful Port Urban Operation.

A SPECIAL PLACE IN OUR HEARTS—FOR OUR CARS

We all know the stress of waiting in an endless line of cars when we're late for an appointment, or dealing with the bozo who insists on riding our bumper all the way to work. But getting people to give up their car habits—a critical aspect of dealing with the congestion question—promises to be no easy feat.

In some European cities, narrow alleys don't leave room for cars. Locals and visitors alike make their way on foot or by moped, and the only congestion is caused by people gathering around the gelato guy. In contrast, Americans are often viewed as being in love with their cars—even when public transit options are available. For them, it will take much more to rethink relationships with cars and commuting.

WHAT'S A CITY TO DO?

So what are cities doing about the traffic problem? The approaches to solving it are as diverse as the cities themselves, from system-wide infrastructure overhauls like we are seeing in Rio to smaller-scale strategies that encourage changes in behavior.

While horses aren't likely to retake center stage on the transportation front, many cities have seen fit to invest in bikeways and public transportation systems, and to encourage ride- and car-sharing to decrease the number of cars on the streets.

Other more individually and culturally targeted approaches include employers replacing the standard 9-5 workday schedule with flexible work hours and room to telecommute. Technology holds promise as well—from smart traffic signals to autonomous vehicles. But, even with all this innovation and attention in the works, experts warn us that the traffic issue, though somewhat malleable, is likely here to stay.

As for Rio, even experts can't say whether key aspects of the project will be done in time for the Olympics—or what kind of real relief they'll bring. A critical section of the system is set for unveiling August 1, but officials are working up a backup plan that relies more heavily on busing.

No matter how they’re getting around, visitors to Rio 2016 can count on spending a lot of time waiting in line. For true Olympics aficionados, it will hopefully be a show worth waiting for.

As the excitement and uncertainties of Rio 2016 ramp up, those planning to brave the traffic of this stunning city can take a cue from the locals who resist leaning on their horns, and from the YouTube commuters who find humor in the slog. After all, Rio was the world’s third worst city for rush hour traffic in 2013, and now it ranks eighth. So things are looking up…right?

Look ma, no hands! An aerial view of Maracana Stadium, the soccer field that will host the opening and closing ceremonies of the 2016 Summer Olympics in Rio de Janeiro.