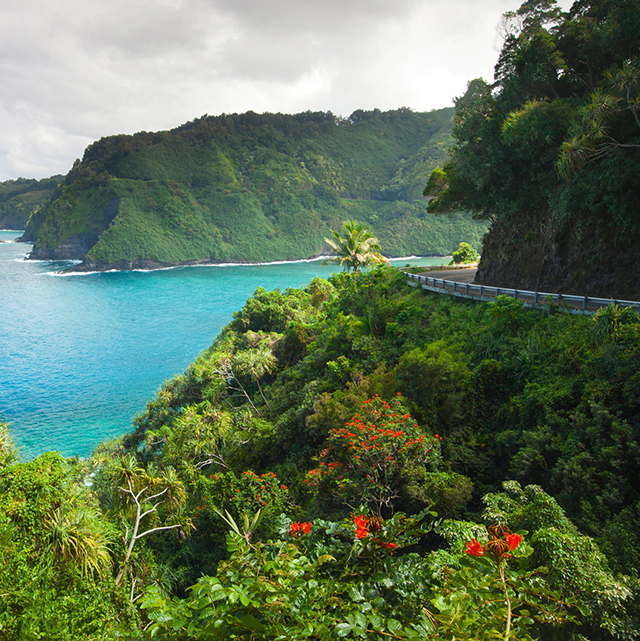 Don’t Look Down: Crazy Roads, Bridges, and Engineering Marvels Around the World

We’ve got a confession to make: We have a bad case of road trip FOMO. Not because our friends keep sending us personalized postcards from the road (though, that too). But there’s nothing we want to do more than drive across the world’s highest bridge. Or skim past Himalayan peaks. Or drive literal inches from the Atlantic Ocean. These crazy roads, bridges, and other marvels of modern engineering have helped make some of Earth’s wildest tracts accessible by car. Now…where (and when!) do we start?

11-year-old Millau Viaduct in France is at once a staggering human achievement (it’s the tallest bridge in the world, with heights surpassing the Eiffel Tower and approaching the Empire State Building) and a work of art, too. Thanks to its backdrop against the South of France scenery and its futuristic look, this is definitely one of the prettiest bridges we’ve ever laid eyes on.

Calling all fans of mountainous terrain and crazy roads. The Stelvio Pass in Italy is (in)famous for its steep, hairpin turns (48, to be exact). First built in the 19th century by the Austrian Empire, it’s one of the highest paved roads in the Alps. This twining route also happens to be pretty jaw dropping in the looks department (better put your co-pilot on Instagram duty).

When The Beatles sang about the long and winding road, were they talking about the Stelvio Pass? Photo by Peter Zelei/iStock.

Where else in the world can you drive within sight of craggy, snow-capped mountains and glacier-carved landscapes…all while getting splashed by ocean waves? The Atlantic Ocean Road, aptly named indeed, zips across a number of islands within one of Norway’s many coastal archipelagos. When you’re not island hopping, you’ll be skimming just above the water’s surface. Fingers crossed for good weather.

The Karakoram Highway—also known as the KKH—ranks among the highest paved international roads in the world. But that’s not the only reason it’s a marvel (though its construction in the 1960s and ‘70s was certainly a feat of civil engineering). Skirting through the Karakoram sub-range of the Himalayas, it follows ancient Silk Road routes past glaciers and jagged mountains the likes of Nanga Parbat.

Scale mountain peaks—all from your front seat—when you journey along Karakoram Highway. Photo by Koonyongyut/iStock.

Attention, claustrophobics: You may want to give the Laerdal Tunnel in Norway a pass. Measuring an impressive 15+ miles, the road tunnel—which opened to the public in 2000—is officially the longest in the world. But for everyone else, the spookily lit, raw-carved tunnel walls will make you feel like you’re driving through the heart of a mountain or two. (Spoiler alert: that’s because you are.)

The epic, ambient Laerdal Tunnel is a vision—a tunnel vision, that is. Photo by sugar0607/iStock.

All right, so you might want to leave this one to the daredevils. But the winner in the crazy roads stakes has to be Bolivia’s North Yungas Road (nicknamed El Camion de la Muerte, or The Road of Death). Built in the 1930s, its combination of Andean heights, narrow lanes, and lack of guardrails has made it infamous. These days, a safer nearby tract gets the bulk of the traffic…but adrenaline junkies still visit the original.

With a nickname like “The Road of Death,” who wouldn’t want to chance the North Yungas Road? Photo by DavorLovincic/iStock.

If the Laerdal Tunnel represents the best of modern engineering, China’s haphazard but remarkable Guoliang Tunnel symbolizes human determination. Hand-carved by a group of villagers in the Henan province, the tunnel was chiseled directly into the flanks of a local mountain to give locals a safe(r) passage past the peaks.

Take a trip through the mountains—literally—when you drive along the mind-blowing Guoliang Tunnel. Photo by FANG Chen/Flickr.

Think of the Hana Highway in Maui as Hawaii’s answer to Big Sur. The coastal road winds its way past waterfalls and overlooks black sand beaches and Pacific waves for a languorous 64 miles. Take the more than 600 curves and 50 bridges slowly—both for safety reasons, and because you certainly won’t want to speed past all this scenery.

Keeping your eyes on the road also means taking in the scenery when it comes to Hawaii’s lush Hana Highway. Photo by wingmar/iStock.

Have you taken any of these famous paths? What’s your favorite scenic (or scary) roadway? Tell us in the comments below.