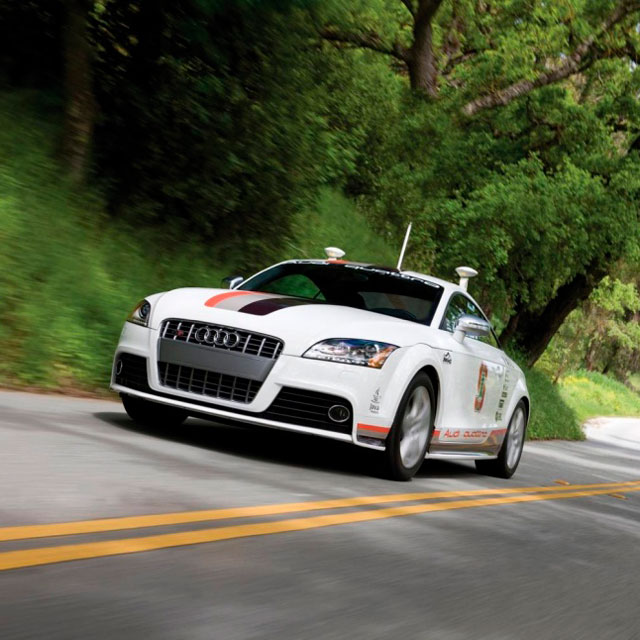 The dream of flying cars is still a part of the distant future…but self-driving cars are another story. Think it’ll be a while until they’re on the road? Actually, autonomous features are already out there, and fully self-driving vehicles are coming sooner than you think. They’re going to change the way we travel by making us more productive, safe, and environmentally-friendly.

By now, everyone has seen that cute little Google car. It singlehandedly made the idea of self-driving cars seem real rather than like something out of a sci-fi flick. But while Google might be the most well-known player on the autonomous car field, they’re not the only one.

If you think of this when you think “self-driving cars,” you’re not alone. Photo courtesy of Google, with art by Danielle Dufayet.

Let’s start with Michigan, home to the famous Motor City. There, you won’t just find new-world technology; you’ll discover an entire town built for the sole purpose of testing autonomous tech from a variety of developers. It’s called Mcity and it’s a whopping 32 acres dedicated to the most realistic fake city of its kind.

Located at the University of Michigan’s North Campus Research Complex, Mcity doesn’t have a single resident, but you’ll find self-driving cars roaming the streets like they own the place. This vast mock city was built with the help of the Michigan Department of Transportation to provide a thorough testing ground for autonomous vehicles, without the risks of the real world.

Mcity includes all the things self-driving cars will have to manage when they’re ready for prime time. There are sections made to look like real cities with intersections, traffic signals, and even buildings and construction work. The road surfaces are also varied from brick to concrete, with a variety of grades and different types of lighting.

There are moving obstacles like mechanized bicycles and humans. (Our robot overlords await.) Testing isn’t limited to only autonomous capabilities, though, since the connected, self-driving car of the future will be able to communicate wirelessly with the surrounding environment. Mcity includes wireless roadside equipment like traffic signals, which—combined with a car’s ability to communicate with other cars—can pick alternate routes before you’re stuck in a traffic snarl. (Super “Minority Report.”)

Google cars have been testing on California roads, but earlier this year, global tech giant Delphi completed a 3,400-mile cross country drive with their autonomous car, Roadrunner. The self-driving wheels made it from San Francisco all the way to New York City—on public roads. The technology is still in development, but it’s come far enough that limited testing on public roads is safe. You’d never know it, but the guy in the driver’s seat next to you in traffic might not actually be driving his car at all.

Virginia is taking self-driving cars to the streets with its Automated Corridor. Photo courtesy of Digital Trends.

What’s key is having support from the roads themselves. Luckily, Virginia has designated a 70-mile section of highways as the Virginia Automated Corridor to allow real-world testing of autonomous cars and promote the advancement of the technology. Approved developers can use these roads and take advantage of two test tracks created for the project. The push to get this technology figured out is important, because it’s more than just a fun way to travel—it will have a far-reaching effect on your quality of life in ways you might not even have imagined.

PROGRAMMED TO BE PERFECTIONISTS

Anyone who has ever been stuck on a monotonous road trip or spent time tied up in rush-hour traffic can see the benefits of not having to man the wheel. (Hello, Words with Friends time.) A driver could instead relax or work (we vote for relaxing) during what would otherwise be downtime. Want to read? Browse mindlessly on Facebook? Stare out the window? Your future car has you covered.

A connected self-driving car could also reduce the length of a trip by choosing a less congested route before getting stuck in traffic. This will both save us time on the road and help protect the environment. Imagine if every car in your morning commute made it to work in less time. The reduction in emissions would have a hugely positive effect on the environment.

Lastly, there’s the safety issue. Accidents happen because we, as humans, are imperfect. (Tough to admit, we know.) Even at our best, we miss things like slowing traffic, obstacles, or pedestrians and animals darting into the road. Our reflexes sometimes aren’t quick enough to stop accidents before they happen. Not so with an autonomous car.

ONE ROBO-STEP AT A TIME

These cars don’t get tired, suffer from highway hypnosis, or have questionable reflexes. They can see more and react more quickly than a human driver. This will prevent costly accidents and, more importantly, prevent injuries and save lives. The question is: How soon will one be parked in your driveway?

The answer might surprise you, because there could be one in your driveway right now. Many cars today come with a suite of safety features that use autonomous technology. Mercedes-Benz, Audi, and just about every automaker have some kind of autonomous feature in their cars.

There’s lane keep assist, which can recognize when you drift from your lane and nudge you back in the right direction. Automatic braking detects an impending accident and hits the brakes if a driver is too slow to react. Some cars can even swerve to avoid danger and then slip right back into the correct lane to prevent collisions. These are the baby steps of autonomous driving.

Autonomous features are one thing, but how will completely self-driving cars fit into your life? It all depends on you. If you want your very own self-driving car, then you will be able to buy one and take it home in a matter of years. According to a recent report from Business Insider, we’re talking some time in the next five.

It won’t be limited to that Google car, either. The technology will be incorporated into cars from every manufacturer and will include the same variety of hybrid, gas, and electric options that we have to choose from today. Much like rearview cameras, it’ll be everywhere.

You may be worrying about how much these cars will cost, and you’re right to be concerned. Just like high-tech features, which can add several thousand dollars to the price of a car, fully autonomous cars will cost more, especially at their first debut. Boston Consulting Group has made some estimates and pins the extra cost at as much as $10,000 more than a standard model. That’s a lot, but don’t panic yet. You can still enjoy the benefits of our self-driving future without buying a car.

When there’s technology manning the wheel, you’re free to chill and enjoy the view. Photo courtesy of Humanitarian Space.

Bringing self-driving cars to the sharing economy could be a huge boost for taking cars off the road. Faster connections between cars and passengers would allow a self-driving car to drop off one person, then drive itself to the next person without missing a beat. People might think twice about car ownership if it becomes so easy to catch a ride, no matter where you need to go. (And fewer cars out there sounds great to us.)

Here’s the coolest part: Estimates have the first fully autonomous cars on the road as soon as 2020. Imagine, the next car you buy (though, y’know—we’re partial to car-sharing) might be capable of taking you wherever you want to go while you sit back, relax, and enjoy the ride.