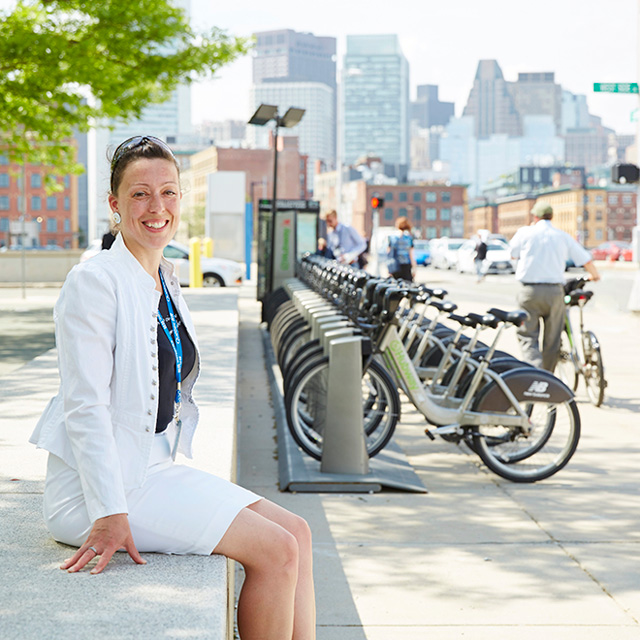 There are many things you expect to find while walking Boston’s Freedom Trail—the Massachusetts State House, Paul Revere’s grave—but a diplomatic representation of a Canadian province isn’t one of them. However, just steps from the trail in the heart of downtown sits the Québec Government Office.

Inside buzzes a team of governmental representatives working together to boost innovation in the northeast corner of North America. Established in 1970 to enable strong relationships between Premiers (Canadian heads of provincial governments) and New England governors, the office is currently celebrating 45 years of productive work connecting the two regions. As neighbors—Québec borders Maine, New Hampshire, Vermont, and New York—the relationship makes undeniable sense.

How does one connect Canada’s largest province with six states across the border? Every day is different, says Laurence Gagnon, Academic and Francophone Affairs Attachée, also in charge of Communications. As a key promoter of Francophone education (Québec is predominantly French-speaking, and about one quarter of New Englanders have French Canadian roots), Laurence may spend one day at a university, meet with legislators the next, and finish the week at a conference. “The themes are very varied,” she says, “and so are our days—not one day is the same.”

While one part of the relationship is helping Québec artists thrive in the United States—maybe you’ve heard of some little-known names like Celine Dion and Leonard Cohen—a large part of recent work involves something near to our hearts: sustainability and transportation.

Marianne and her team turn to Zipcars often; our EVs are (fittingly) a top pick.

“The future is electrification,” explains Director of Public Affairs Marianne Bonnard. “44% of our greenhouse gas emissions come from transportation.” As a result, they have been working tirelessly with the New England States to lower emissions and enhance electric vehicle infrastructures on both sides of the border.

It may seem like a vast expanse of geography to move in sync, but Marianne sees it as harmonious. “New England and Québec share the same public policy goals, the same values. Each works differently on how to implement things, but the general vision is really a common vision of the future around sustainable development.”

The key to sustainable transportation, says Marianne, lies in electric vehicles (EVs). While more eco-friendly than traditional gas-powered cars, the challenge in bringing them to the mainstream is in the charging systems.

“There needs to be interoperability of the system to make sure the plugs are compatible, and that the payment system is easily accessible for everyone who wants to recharge,” says Marianne. Québec and its New England partners aim to create a continuous, interconnected EV charging corridor that runs from Canada throughout New England. Success is already underway in a network of 40 charging stations connecting Montreal, QC and Montpelier, VT.

Car sharing is a major part of the partnership’s responsible energy vision.

While many U.S. cities are making leaps of progress in sustainability, we have a lot to learn from a province that has been quick to pick up EVs. “In Québec, we can do it because we have so much hydropower,” says Marianne. “So we’re working with New England states to help them develop their own magic formula.” This win-win-win situation is what Marianne calls the “golden triangle” of public policy: transportation, climate, and energy all benefit.

Speaking with Marianne and Laurence, it becomes very clear that they not only talk the talk, but walk the walk—literally. They embrace a government policy of choosing alternative modes of transportation, whether for their daily commute or traveling to meet in other states. As Laurence reflects, “The mentality has changed. Seven years ago, it was a requirement that I knew how to drive, and my job preferred that I had my own car.”

Now, they support their busy travel schedules by walking, bike sharing, taking public transit, and car sharing. With so many options, they are able to make smarter choices. “We do more mental gymnastics of how to go to places,” says Laurence, but it pays off. “We have an expression: The math is worth the work.”

Public transit, walking, bike sharing, and car sharing are all part of an ecofriendly transportation portfolio.

Back at home, Québec was the first to embrace car sharing in North America. “It’s completely in line with our government’s vision of transportation of the future,” Marianne agrees. Here in Boston, “we used to have a corporate car. We’re selling it now.” When they do need wheels, Zipcar is their go-to—with ONE>WAY as a particular favorite.

What’s next? The Paris international climate summit in December will allow the Québec government to promote carbon markets as an efficient tool to reduce greenhouse gas emissions. Québec is already working with other leaders, including those from Vermont and California, whom they see as partners in “coast-to-coast collaboration.” Additionally, they are following the discussion on how to increase clean energy here in New England.

Whatever their next victory, we’ll be here in a Zipcar EV ready to plug in clean.