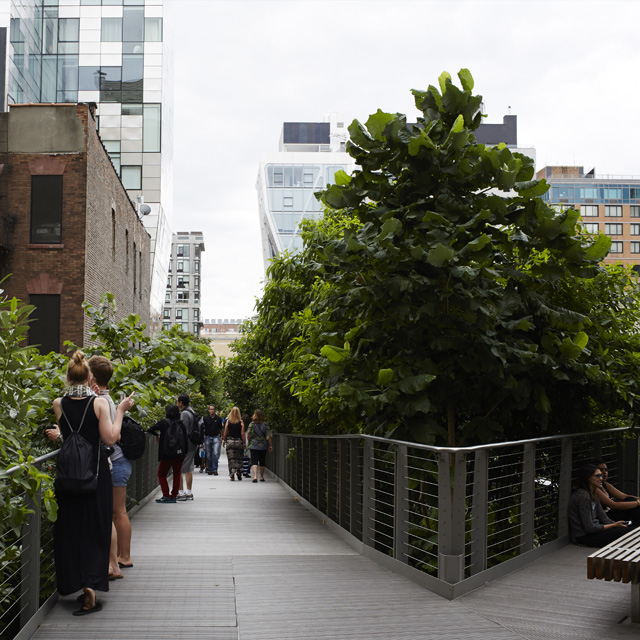 You can take an elevator to the top of the Empire State Building, climb the Statue of Liberty, or peer over a martini from any number of rooftop bars in the city. But nothing will give you a view of Manhattan like the High Line.

This suspended public walkway and park — originally a railroad that fell into neglect in the ‘80s and ‘90s — has enjoyed a recent and glorious rebirth. The High Line winds its way for 1.5 miles along the west side of the city, from the Meatpacking District at Gansevoort Street up through 34th Street, affording beautiful views of the Hudson, plenty of places to lie around and read, and a unique peek at nostalgic old structures and glistening, glassy new ones.

Lifted just above the fray and yet very much intertwined with the bustling cityscape, the High Line lets you do something you can’t do anywhere else in the city: Walk at an unhurried but consistent pace for nearly 15 blocks without once being afraid of being sideswiped by a taxi.

The High Line was originally constructed in 1930 as part of a massive public-private project called the West Side Improvement. The goal: to elevate freight trains 30 feet above street level in Manhattan’s largest industrial area, to relieve traffic and put an end to the fatal accidents caused by the intersection of freight trains and street-level traffic.

Facing decades of overgrowth on the tracks, High Line developers decided to embrace nature in the new design. Left Photo by Joel Sternfeld.

This railroad, which originally ran from 34th Street in Midtown down to St. John’s Park Terminal on Spring Street, rolled right inside buildings to deliver milk, produce, meat, and other goods directly. And it did this for nearly 50 years, until an expanding trucking industry caused a decline in rail use. The High Line saw its last train in 1980.

For years, it was a rotting eyesore that plenty of people lobbied to have torn down completely, until local residents Joshua David and Robert Hammond formed Friends of the High Line to advocate for its preservation — and won. In 2002, the City of New York filed with the federal Surface Transportation Board to preserve and reuse the High Line.

Today, the High Line is a public-private project that has opened in phases, with the last phase due to open at the Hudson Rail Yards in fall of 2014. Today, you’ll find all manner of people up there, at all hours of the day and all days of the year, enjoying not just a stroll, but taking in some tasty treats from select local food vendors, peering through telescopes, reading — or just straight-up people watching.

THE AESTHETICS OF THE HIGH LINE

Zipcar spoke with Lisa Switkin from James Corner Field Operations, the firm that has guided the project from its inception to execution. Switkin has worked on this project from the beginning, and in the course of her ten years with the High Line project, has gone from lead designer and project coordinator to a principal at the design firm.

With an at-your-doorstep delivery system that would make the pizza guy jealous, trains on the High Line used to run through buildings for drop-offs. Left photo by Jim Shaughnessy, right by unknown photographer.

Here, she offers some fascinating insights into what went into its design and execution — and why it’s a must-see.

Zipcar: There were lots of ideas pitched for how to use this unique structure and space. Which ones excited you?

Lisa: In 2003, the Friends of the High Line held an ideas competition to generate excitement and attention for the project. And there were so many great ideas, from roller coasters to lap pools. The purpose wasn’t to implement those ideas, but to attract entrepreneurial talent and advocates, which it did.

At this elevation, the High Line allows visitors to escape the chaos of street life while still remaining well within the city.

What was your vision for the High Line?

The aspiration was an ambitious reclamation project: to transform an abandoned elevated freight line into an extraordinary and innovative public space, connector of neighborhoods, and new model for the greening of the urban environment. It was such a unique space. We wanted to get it just right — to balance preservation and innovation, amplifying what was already there and growing something new out of something old.

At 1.5 miles long, the High Line has a variety of places for walking, lounging on benches, and taking pictures from viewing decks.

The High Line spans three different neighborhoods, and yet it has a very intimate feel, so the pace and experience was important to us. It is designed as an episodic journey, not just through space, but time, too. And the idea wasn’t to have it be an “escape” from the city so much as it was to have a dialogue with it. That’s why people love it so much.

The High Line gives you the sense you’re having this undercover, insider, and authentic New York experience. Which, in many ways, you are.

Was it always intended to be a green space?

We wanted to have a lush, vegetated, and immersive experience, but one calibrated to the city. There’s a choreography to the space, a series of thresholds, transitions, and destinations. We were inspired by the fact that the High Line was a kind of ruin, where nature gradually overcame the structure. We tried to preserve that wild, informal feeling with the plants we chose — a rich, diverse palette of over 300 species that includes a combination of meadow grasses and perennials such as switch grass, swamp milkweed, big leaf mountain mint, salvias, asters, and prairie dropseed, all of which help break up and soften the grid of the city.

Was there an intention behind the design to help people act or feel a certain way?

Absolutely. One of the design principles from the beginning was: Keep it simple, keep it slow, keep it wild, keep it quiet. Hudson River Park, by contrast, is fast — all bikes and blades. We wanted the High Line to slow you down. It’s not meant to be a city street. We wanted to encourage more unscripted behavior and created the design elements, the meandering paths, benches, the lounge chairs, etc. more as prompts or invitations for people to use the space more informally. And we found people really do use the space as they would their own backyard.

Visitors experience a juxtaposition of greenery and urban environment that Lisa calls a “dialogue” with the city.

What are the areas that visitors shouldn’t miss?

Don’t miss my favorite spot, the Sun Deck, between 14th and 15th Streets, where you can get a beautiful view of the sun setting over the river. This is where we put a scrim of water that runs over the surface and helps soften the sounds of the West Side Highway, and you can take your shoes off and splash around in it. There’s also the sunken overlook that peers out at the traffic on 10th Avenue through a big picture window, and you can watch the cars scroll up like credits in a movie. It’s a fun gathering place.

Is there an ideal time of year to visit the High Line?

We designed the High Line to celebrate the life cycle of the plants, so it looks different throughout the year. There are lots of blooms in spring and summer, but my favorite is September through November, when everything turns to reds and golds. No matter what time of year it is, I rarely go up to one spot and come back down. I always end up walking it. It’s hard not to.

This is the fourth in our series: Changing City Landscapes. We’re chronicling the fascinating ways cities adapt spaces to fit tomorrow’s needs with building blocks from the past. Through urban adaptive reuse, visionary architects, developers, and city planners are turning blight into beauty.