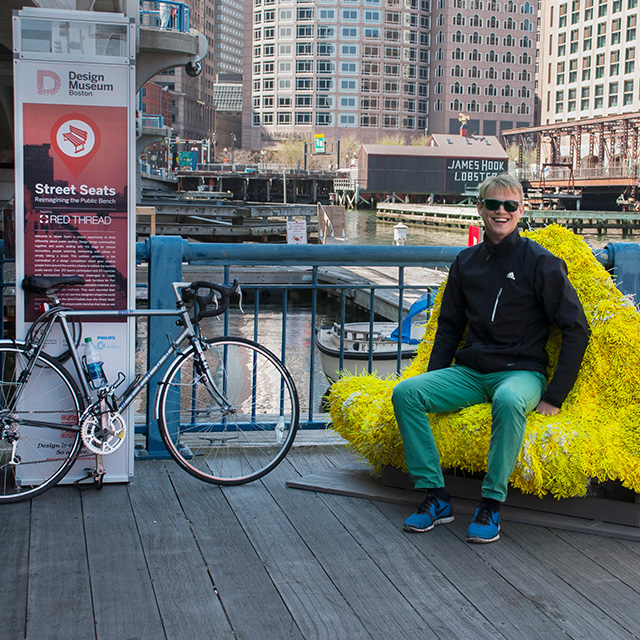 No Admission Required: Design Museum Brings the Exhibitions Outside

When you walk into jm Curley on Temple Street in downtown Boston, you may notice something dramatically different: a booth that artfully features wood and steel, a Zipcard reader—and its own exclusive menu. It’s not a table that got lost on its way to a design expo; it’s part of a striking pop-up installation spearheaded by Design Museum Boston.

Design Museum Boston doesn't always happen inside a building. But when it does, it draws a crowd.

While new to the foodie scene, Design Museum Boston has been a part of the city’s fabric for more than half a decade.

The goal, according to cofounder Sam Aquillano, is to “show people how good design can really improve our lives, whether it’s better buildings, better products that are easier to use, better cities in general. We really want to show people that, have them appreciate good design, and then demand good design.”

Since launching in Boston six years ago, the nonprofit organization has expanded to Portland in 2014 and San Francisco earlier this year, becoming Design Museum Foundation. “Our vision really is to be in every major U.S. city,” Aquillano says. “We really want to be out there educating the world about design.”

Going somewhere? So is Design Museum Boston—like with this exhibit on travel in the modern age.

Unlike a traditional museum, Design Museum doesn't have its own private collection—or even a permanent gallery space. Instead, it curates pieces from other sources and temporarily displays them in unexpected public spaces. Exhibits have occupied empty retail locations, public outdoor areas, and even corporate lobbies and airports. “Our whole motto is ‘Design is everywhere and so are we,’” Aquillano says. “Design is part of everything and is everywhere, so the museum is everywhere.”

An exhibit at Boston’s Logan Airport called Getting There: Design for Travel in the Modern Age looked at how airport design impacts travelers’ experience. “Everyone travels and it kind of gave a behind-the-scenes look at the signage and the seat that you sit in on the plane, and how all these different things are designed,” Aquillano says. “We did a lot of historical research looking at the Golden Age of travel.”

Gaining seat cred at these winning bench designs, installed around Boston’s Innovation District for all to enjoy.

Another exhibit called Street Seats: Reimagining the Public Bench invited designers from around the world to submit designs for innovative public seating. Of the 170 entries from 23 countries, 20 semi-finalists were chosen and received funding to create a full-scale version of the bench to be displayed in Boston’s Innovation District. Adjacent kiosks and a mobile app amplified information about the designers and their inspiration, so visitors could eat lunch on the benches while brushing up on contemporary—and locally implemented—design.

Most recently, Design Museum teamed up with sponsors and seven restaurants in downtown Boston to redesign a small section of each restaurant. The Design for Dining exhibition runs June 11 through November 11. “We call them functional vignettes that you can actually sit and eat at,” Aquillano says. Many offer special cocktails or menus based on the table to make the meal that much more unique.

By creating a new experience for restaurant patrons, Aquillano hopes they’ll view the space from a different point of view. “They may have gone to one of the restaurants or a handful of restaurants a bunch of times and never really thought about the table, the chairs, the lighting, the interior, the brand,” he says. “By creating this new experience, it will help them shine a new light on the entire experience.”

We'll have the table outside...that's inside. You get it.

With a broad range of designer's aesthetics and venues, each installation offers diners a different experience. Zipcar is sponsoring Jaywalk Studio's design for jm Curley, an eatery named for a former Boston mayor who served time in Danbury Prison during his final term. Like its namesake, “the restaurant is a little rough around the edges,” Aquillano says. Drawing inspiration from the bar and restaurant’s rustic steel and wood décor, the designers at Jaywalk Studio fashioned a sturdy steel and wood dining table. And for the finishing touch? There’s a Zipcard reader built in, so when patrons sit down and scan their card, they receive a special gift.

Aquillano also points to Gate 3 Design’s redesign of Sip Wine Bar. “They basically redesigned a whole section of the restaurant to add a giant super graphic of the Italian countryside,” he says. “When they’re eating at this table, it just feels like you’re eating outside.”

Silverman Trykowski Associates’ design for Silvertone is another highlight of the exhibit, according to Aquillano. “Above the table is a giant mirror, and basically the idea is to put your phone with your camera facing up, and then everyone at the table looks up and you can take a table selfie,” he explains—no selfie stick needed.

Design is everywhere—including on the catwalk.

Not to rest on its laurels, Design Museum has other exhibits already in the works. Finalists’ designs for Rapid Jewelry, a 3D Printing Design Competition will be displayed at the Boston Architectural School starting August 20. “Like the Street Seats, we got entries from all over the world,” Aquillano says. “People who design their jewelry on a computer entered by sending us a rendering. We had a jury that chose 21 designs that we then 3D printed. It’s a really cool collection of jewelry: bracelets, rings, necklaces … We’ll have all those in the exhibition, along with the 3D printer, so people can actually see how 3D printers work.” It’s also aptly located amidst the highly trafficked—and super chic—shops and restaurants on Newbury Street.

Aside from Design Museum’s exhibits, Aquillano says the city of Boston is gaining a stronger sense of design and creativity at large, with projects like the public art on the Rose Kennedy Greenway. “It's showing in the amount of what we call ‘tactical urbanism’ or public engagement,” he says. “I think the public is really enjoying the changes and the creativity that's happening.”

Have you experienced any of these urban installations? What was your favorite? Tell us your picks—and other city design highlights—in the comments below.