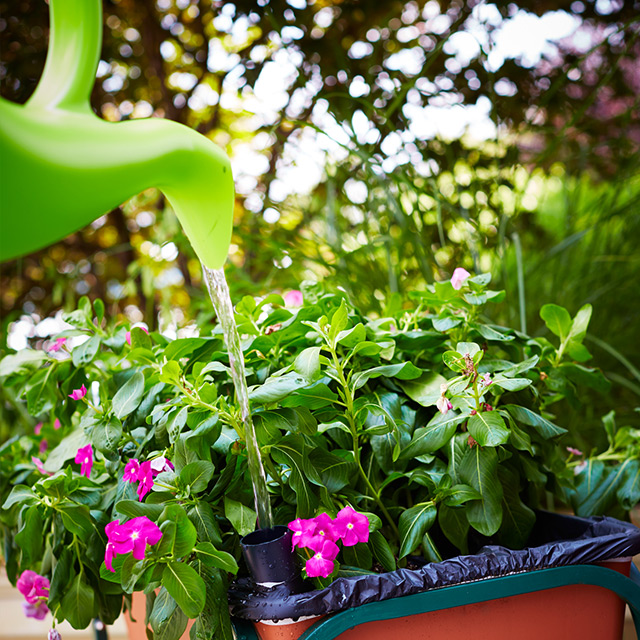 Fresh City Eats For Everyone (Yes, Everyone)

There’s a buzz in the air about knowing where food comes from. That’s why we wanted to get the dirt on EarthBox. This company produces space-saving garden boxes that allow for urban farming. You can self-sustainably grow plump, fresh tomatoes on your tiny concrete patch of land.

The EarthBox system works “no matter what color your thumb is,” because of its self-watering, sustainable, weatherproof design, and because the soil and fertilizer amounts are already all planned out for you, and stay contained in the box.  On the 20th anniversary of the company’s launch (observing millions of EarthBox systems currently in use), Zipcar caught up with 7-year EarthBox veteran Stephanie Youngs-Seese to chat about how creating an urban garden, and a whole new lifestyle, can be a snap.

Zipcar: How did the EarthBox system come about?

Stephanie: It was invented by a commercial tomato farmer in Florida, Blake Whisenant. In the early '90s, Hurricane Andrew swept through that area and he lost his crops. The hurricane just destroyed everything — all the flooding and the rain washed away the nutrients. He asked himself, “How could I prevent this from happening again if we got major flooding?” His plan was to learn to manufacture the system and sell them for commercial farming, but it caught on for the homeowner. Now most of the business is consumer-based.

What makes it so different from other gardening containers?

The idea is you have a mound of soil and fertilizer on the top and then it’s covered with black agricultural plastic film. That prevents rains from washing nutrients away, so the fertilizer can continue to go to the roots of the plant even in heavy rain. The plants grow bigger and healthier because they have what they need when they need it, and the fertilizer stays where it needs to be.

It’s often for people that are elderly and have back problems and arthritis. They’re not able to dig and till up soil, so this is much easier. We also have a young customer base—people who work full-time but who want fresh, healthy vegetables at the end of the day. They live in apartments and townhomes. The systems are also very popular for rooftop gardening in cities. There’s a chef in Chicago, he has a cooking show on public broadcasting, and he had an entire rooftop garden of tomato and basil and lots of different herbs he uses. It’s not uncommon for an apartment building to do a rooftop garden together, or you see people who grow it on their little balcony or outside their kitchen sliding door.

So what can you grow in one of these?

The product itself is good for growing any kind of traditional vegetable: kale, Swiss chard, lettuce, beans, or a fruited vegetable like tomatoes, eggplant, peppers, even corn… garlic, onions…. the possibilities are almost endless. You just need to plant at the beginning of the growing season for your region. We don’t recommend growing a large food crop like a rutabaga or carrots. It’s very popular for herbs. One of the fertilizers we offer is organic and has been certified for organic production, so people have the option of that, as well.

Sounds like you're very passionate about growing your own food. Have you always had a green thumb?

When I started with the company in February 2008, I had never gardened before. I was 23 — what did I care about gardening then? I was given an EarthBox system to take home when I was hired. They asked “Do you like tomatoes?” And I said, “Of course, I’m Italian and from New Jersey.” She told me to put two tomato plants in and follow the directions. I was surprised by how easy it was. Now, I grow tomatoes, eggplants, peppers. I’ve gained an interest in canning my own food. I own 16 EarthBox systems, and it’s helped me to adapt a healthier lifestyle.

How do you think something like this could improve quality of life in urban communities?

A woman [Lorraine Gibbons] approached us about setting up a community garden in Newark, NJ, a very poor community. There are places like this, sometimes called “food deserts,” where people have zero access to healthy food. In these places, there’s a McDonald’s on every block, their convenient marts only sell packaged food, and people lack the funds for transportation. They walk places and rely on buses. They don’t own cars. With her own money and in cooperation with Cory Booker, the former mayor of Newark, they put together a community garden. It was in a rundown lot, weeds everywhere, bad soil. A lot of people have contaminated soil; even if they could farm, it’s contaminated with chemicals and lead and things like that.

They put 500 boxes in that garden with community volunteers and they grew healthy food for the neighborhood.

Since then, she’s grown her Garden State Urban Farms program. In a city, you can dramatically improve someone’s quality of life and access to healthy food with this system.

What's coming up in the future?

There’s a lot on the horizon, but one thing is that it sounds like the owners of [parent company] Novelty are very interested in pursuing is education and community. We are in some schools now, and we have a full curriculum for kindergarten through 12th grade. It’s learning-based, showing the educator how they can tie the EarthBox system into various science and engineering and math teaching. It’s not just about gardening and getting tomatoes at the end of it. The students learn marketing techniques so they can sell their produce to family and friends. They learn about life: how seeds grow, how light and water impact that. It can teach you a lot.