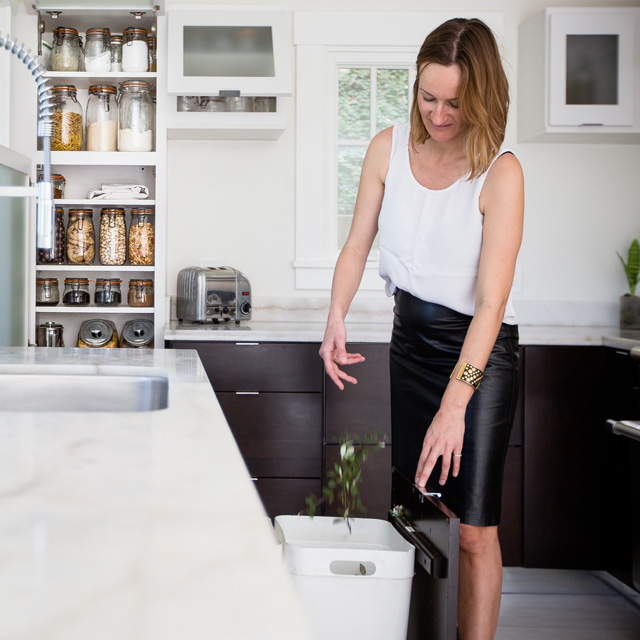 Life Without A Trashcan: A Look Inside the Zero Waste Home

When Bea Johnson and her family moved from the suburbs closer to downtown in the Bay Area, she didn’t realize she would end up getting rid of 80% of their personal belongings. Instead of missing them, she felt free. Inspired, she wondered if she could take this minimalist concept further—this time to the trashcan.

STARTING UP BY CUTTING DOWN

Bea challenged her family to live a zero-waste lifestyle before she even knew what zero-waste meant. All she knew was she wanted to live more simply and become more educated about environmental issues, so she embarked on her own research. “What we found made us pretty sad for the future that we were gonna leave behind for our kids, so we decided to do something about it,” she recalls.

Glass jars and bulk ingredients make for a zero-waste (and picture-perfect) kitchen.

By eliminating products with plastic packaging and substituting with reusable containers, the family of four was able to accumulate only a single Mason jar full of waste in an entire year. (Whoa—we know.) How did they manage that?

At first, Bea was baking her own bread and making her own butter, but eventually, “we let go of those extremes,” she says. “I work a full-time job.” This focus on long-term solutions helped the family stick with it, rather than keeping it a temporary phase. “Zero waste was never a challenge or a short-term project—we’ve always considered it a lifestyle.”

BEING #1 IN ZERO WASTE

The Johnsons were pioneers. Today, reusable grocery bags and compost bins are common, but in 2007, Bea couldn’t find much information about the zero-waste lifestyle. After failing to find helpful blogs or leaders, she decided “there was no one really doing this, so I kind of had to pave the way and figure things out for myself.” Instead, she and her husband donated the majority of their possessions and moved into their new home, which would eventually become the topic of Bea’s bestselling book, Zero Waste Home.

One of the most important places to start was the kitchen. From egg cartons, to plastic shopping bags, to paper wrapping, the refrigerator and pantry are lined with waste. Buying in bulk became a simple solution, as well as a cost-saving one. “50% of price is packaging, so bulk is savings,” Bea explains. She even brings her own jar to the deli counter to buy meat. In response to the weird look she gets, she simply explains: “I don’t have a trash can.” Bea is careful in how she explains her sustainable alternatives. “I’m not here to tell anyone how to live their life. I’m only here to show them how it evolved.”

After (very) brief education, the meat counter is happy to accommodate reusable containers.

Of course, being at the forefront of a movement brought on some pushback. “When our story came out in the New York Times back in 2010, the comments were really nasty,” Bea says. She admits that if she were one of the readers, hearing for the first time about a zero-waste family, she would assume that they were hippies, or that they had a lot of time on their hands. Now she knows that’s not true. “Being able to shatter the misconceptions of this zero-waste lifestyle, we’ve been able to show that you can live a modern life.” Is the feasibility limited to certain urban or rural areas? “I live in the county that is the most wasteful county per capita in the U.S.,” Bea laughs. “If I can do it, I really believe anyone else can.”

Even her family didn’t all jump on board at once, especially Bea’s husband. They debated about the power of one household in a much larger consumer ecosystem. While he felt that corporations were responsible for making change, Bea disagreed. “I personally believe that shopping is voting,” she says. “The manufacturers will only make what the consumer is buying.” One of the most persuasive arguments came when they compared their banks statements before and after the shift: They were saving 40% on their overall spending!

Now you’re curious—after all the downsizing, what trash made it into that Mason jar? Fruit stickers from apples when they weren’t able to get to the farmers market, Band-aids from her kids’ vaccinations, an old bike cable, rusty joints from the sink, and an expired passport cover.

Everything in its (reusable) place. A collection of custom bags fill up with bulk items.

HOW YOU CAN BE LESS TRASHY, TOO

Are you setting yourself up for a life of sacrifices? No, says Bea. “There is nothing that we miss. The only thing we regret from this lifestyle is not starting earlier.”

Want to give it a try? Here are a few of Bea’s tips for a less wasteful life:

Feel inspired to try zero waste—or are you doing it already? Share your thoughts and tips in the comment section below.

BY CHRISTIE BRYDON // PHOTOS BY SEES THE DAY