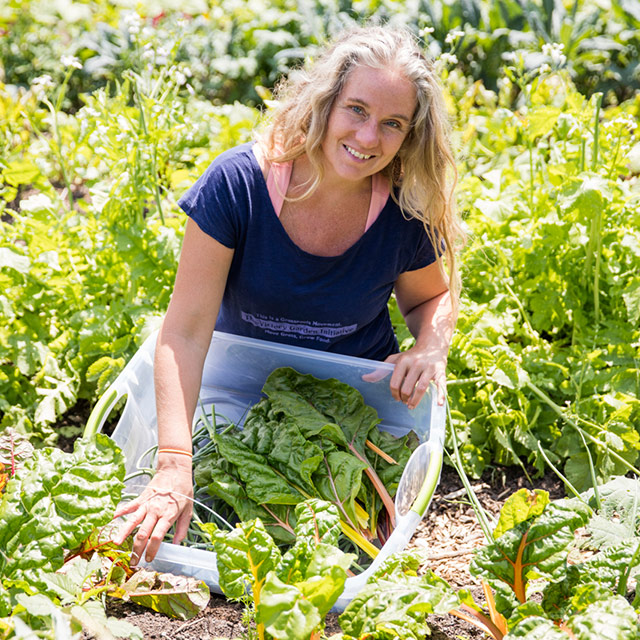 Activist Gardening Is A Thing, and It’s Helping Lots of People

Most thoughts about gardening typically veer on the side of the practical (trowels, fertilizer, gloves) or the romantic (blooming flowers, blossoming fields, dew-covered produce). But for Gretchen Mead, founder of the Victory Garden Initiative in Milwaukee, gardening is radical, revolutionary—and even life-changing.

SEED OF AN IDEA

It all started when, in 2008, Gretchen—a social worker exposed to poverty on a daily basis through client interactions—and a few friends hit on an idea. Why not take their passion for gardening and (literally) plant it in others’ yards?

After all, while gardening has been a way of life for centuries, fewer and fewer people pick up rakes and hoes due to busy lifestyles. And once crops harvest, the ability to pluck fresh vegetables right outside one’s door is extremely valuable in nearby communities subject to a “food desert” (lack of access to fresh vegetables due to a glut of gas stations and convenience stores). By bridging her backgrounds and interests, Gretchen (a resident of the village of Shorewood) realized she could contribute to “a local and resilient economy and community.”

Gretchen relaxes (for just a moment!) after helping to lay down the groundwork for a Victory Garden Initiative Blitz.

But the best-laid plans (or plants) don’t always go as expected. Within minutes of planting that first garden in someone’s parkway—that wedge of space between the sidewalk and the curb—Shorewood issues a citation. The village immediately started drafting an ordinance to ban gardening in parkways.

News hit the airwaves for Wisconsin Public Radio and National Public Radio. Listeners were noticeably upset. “It helped me realize that we were onto something, and that I needed to organize people around the idea of growing food for other people,” says Gretchen. She organized a committee to get the village to change its policy about where to garden. Due to a tie vote, the ordinance was never made official—a win for urban gardening activists.”

Rome wasn't built in a day, but when it comes to Milwaukee's Victory Garden Initiative, a whole lotta gardens are.

Gretchen’s organization now employs five people (she serves as executive director), and the resulting Victory Garden Initiative also farms a 1.5-acre lot in one of Milwaukee’s poorest neighborhoods, yielding an acre of herbs, fruits, and vegetables each year.

A HANDS-ON HAND UP

This connection to low-income communities isn’t a fluke—it’s a driving catalyst for Gretchen. The concern stems from her exposure to this population as a social worker doing home visits. “I would see the food they had access to, which was really bad,” she says. “It was just one more stressor for somebody who already leads a stressed life.” That’s why half of all Blitzes are for low-income zip codes in Milwaukee—and, to qualify, the homeowner or renter pays only what they can afford.

Gathering soil for just one Blitz stop of many.

In addition to the health benefits of fresh produce, the hands-on effort of tending to a garden can instill a quiet activity into anyone’s life; a time to simply be. “If we can get people to grow their own food,” says Gretchen, “they’re going to get outside, have immediate access, and get sunlight. It’s very therapeutic.”

As a community organized around gardening, the potential for Gretchen’s initiative—which organically links gardeners and foodies with inequality activists—is limitless. “It’s so catalyzing. It brings so many people to the table,” says Gretchen. Companies can participate, too, by sponsoring an event or providing financial donations, with an eye on creating more gardening space than ever before.

Several of the more than 300 volunteers band together for an urban gardening revolution.

Better yet, Victory Garden Initiative has already expanded its green footprint, training communities in Green Bay, Wisconsin, and Berea, Kentucky, to organize their own Blitzes, and with astonishing results: Earlier this year, Berea volunteers installed 131 gardens. Green Bay brought 100 gardens to its town in 2014.

In the future, Gretchen would like to package classes for communities, as well as develop a gardening-mentor program to train more gardeners. The idea of forming Victory Garden Initiative chapters and a membership model has been floated, too.

The personal connections in communities are at the heart of Victory Garden Initiative's efforts.

It’s all part of Gretchen’s vision of a sustainable, accessible future. “In 50 years, I imagine that pretty much everyone, as a way of life, is engaged in growing their own food, like we do our dishes,” she says. “We’re getting to a tipping point where people want something different than what they’ve had for the last 50 years.”