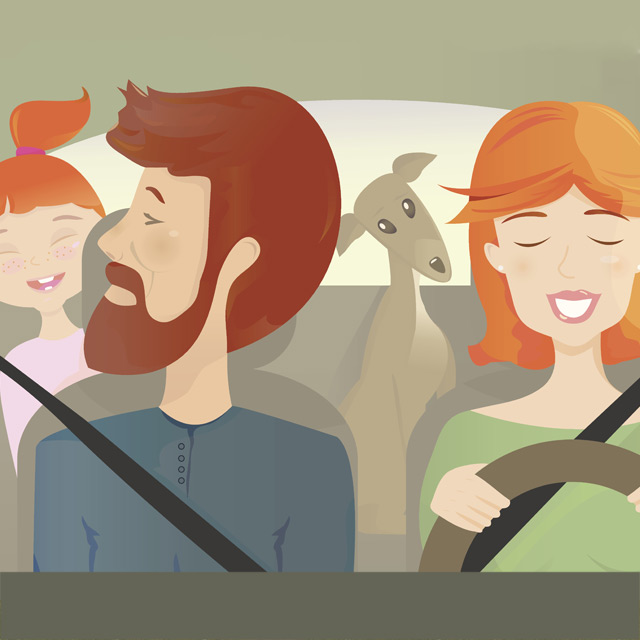 9 All-Time Best Car Games You Played as a Kid (That Your Kids Will Love, Too)

Whether you’re a parent with kids or a kid at heart, car games bring out the nostalgia in all of us. They can also help kill some time when choruses of “ROADTRIP!!!!” turn into whines of “Are we there yet?” Here are some age-appropriate car games that are sure to please, and bring you back to your childhood (minus the fights over the front seat).

Once upon a time before the iPad, people had to make up stuff to do in the car.

Who knows who Simon is or why he’s so bossy, but it’s all in good fun in this classic preschool game. If Simon says it, you do it. If it doesn’t start with “Simon says,” don’t do it. It’s pretty easy to grasp, even for toddlers. It keeps those short-attention spans engaged so it’s a great game for the car, and helps teach kids something you REALLY want them to learn how to do: Listen! (It might even be a good one to play with the older kids. Simon says get your feet off the headrest!)

I Spy with my little eye, something blue that starts with an T. Can you guess?

Observation skills get tested to the limit, boredom gets banished, and there’s no charger needed. You can take turns spying an object and giving a few hints like the color or the letter it starts with. “I Spy with my little eye, something pink that starts with an S.” (Sunset!) This game offers a great chance to take a peek into how your kid views the world. “I spy something crunchy” may make you think of food, when your little one is thinking of the sound her feet make on the leaves. Granted, if you’re on the highway with things whizzing by at 60 mph, you’ll have to be careful to choose a semi-permanent object, or be forced to play the rapid-fire version of the game: “I Spy something… red, I mean blue, I mean brown…”

I’m Going On A Picnic

Remember this one? “I’m going on a picnic and I’m bringing….” Then the first player says something with the letter A. (Apple is a safe choice.) The next player repeats what the last player said and adds another item starting with a B, like so: “I’m going on a picnic and I’m bringing Apples and Bananas.” You keep going from A to Z, or until there’s only one player left who can remember everything in that overstuffed picnic basket. For the younger kids, you might need to give clues to help them remember the next letter of the alphabet or an item they could bring. For older players, give extra points for creativity. Instead of Apples, maybe you bring an Avocado salad. Ooh la la. Fancy picnic.

The License Plate game! One day, Alaska. One day.

Teaching your kids about geography? See how many license plates you can spot from another state. Find as many different states as you can. Once you get beyond the states bordering your own, that’s when things get really exciting (relatively speaking). The fun thing is that this can be an ongoing game that you play throughout your trip. For instance, you may find four or five states quickly and then plateau. Then 40 minutes down the road, all of a sudden, you spot Alaska: the white whale of the license plate game!! This is sure to perk up your car trip, at least for a few miles.

Good for All Ages

If listening to a car full of your friends or family singing "Sweet Caroline" sounds like torture, then skip along to the next game right now. If you like singing off key, and don’t mind a little Neil Diamond once in a while, then start doing your vocal exercises! All warmed up? Good. Now cue up a crowd-pleasing tune, look up the lyrics on your phone, and belt it out! Harmonizing with friends or family members in the car has been scientifically proven to be the ultimate bonding experience. (That, and making s’mores.)

Many a sore shoulder has been sacrificed in the name of Punch Buggy.

Good for All Ages

Okay, you might be opening a Pandora’s box by inviting children to punch each other in the car, but this one is for sure a classic. It’s the first thing everyone shouts out when you ask, “Which games did you play in the car as a kid?” Punch Buggy (also called punch bug, punch car, punch dub, piggy punch, slug bug, or beetle bug) is played simply by punching your neighbor in the arm and shouting “Punch Buggy!” every time you see a VW Beetle driving on the road. Those of you born after 1980 probably won’t get why anyone would be so excited to see a VW, but the iconic “VW Bug” launched in 1967, and was truly a sign of the times. Just seeing one drive by could make a person smile. Well, until they get a swift shot in the arm, of course. While it’s less frequent to see Beetles around today, it makes the punches all the harder when you do spot one.

With Mad Libs, you build silly stories by crowdsourcing nouns, verbs, and occasionally sound effects. It will lead to such hilariously dissonant sentences as: “Christopher Skywalker set sail for Disney World but landed in the Grand Canyon after farting way off-course.” Go old school and bring the flip book for your road trip with multiple stories to fill in the blanks and have a roaring good time. You can find Mad Libs all over the place—Amazon, Target, or a bookstore if you can find one. There are even specialty versions with stories about Star Wars, The Muppets, Frozen, and… the Wu Tang Clan. Yes, seriously. (Maybe save that one for grown-up car trips.) If you’ve gone paperless, there’s also a Mad Libs app. The app itself is free, but the books (which contain 21 stories each) cost $1.99. It’s sure to be a smelly good time.

Getting creative helps keep the backseaters happy and having fun. (Rather than cranky and fighting.)

Good for Ages 9 and up

This is the game that originated the famous phrase: “Animal, vegetable, or mineral?” Wildly popular in backseats from coast to coast, 20 questions hit super stardom in the 1940s when it became the format for a successful radio quiz show. The way it works: One person thinks up an answer and the rest of the players ask Yes or No questions (20 or so) to try to figure it out. A few classics include: Is it bigger than a breadbox? Does it live in the ocean? and Could you wear it on your head? All three? Now that would be weird. This game can be as challenging or as easy as you wish. You’ll probably want to keep things simple for the elementary school set, but your best bet is to gear the game to the general IQ level of your audience. (Your sister’s new boyfriend is probably going to bring down the average.)

This one can get really scatological really fast depending on who you’re playing with. If you would rather (ha) keep it clean, then be sure to set the tone from the start and call people out, or things could really start going off the rails. Or maybe you like digging down deep for some hysterically off-kilter questions. (It’s your car, you set the rules.) If you’re not familiar with this one, it’s a simple game where you try to come up with two equally horrible options for your partner to choose from. Would you rather swallow a bug or stick a caterpillar up your nose? Hmmm, tough call. Would you rather marry the ugliest man on earth or be the ugliest man on earth? Quite a conundrum. These crazy questions invite creativity and also pose moral questions guaranteed to keep the talk lively. And sparking some novel conversation when you’re stuck in traffic going two inches an hour is what it’s all about.

Stop and savor the moment when you’re talking, laughing, and just being together. It goes by so fast.

A Few Tips for the Game-Master:

Keep it light: Don't get too competitive. Keep it silly and casual to avoid arguments or temper tantrums. (That goes double for the grownups.)

Mix it up: If a game is working and everyone’s having fun, then enjoy living in that Rockwell painting as long as you can. But most kids (er… humans) have short attention spans…. What were we talking about? Oh yeah… Switch to a new game if players lose interest.

Use teamwork: If you’re able to ride in the passenger seat while your partner takes the wheel, that’s ideal. That way you can play gameshow host, DJ, and snack dispenser, and the driver can focus solely on driving—and on getting all your goofballs safely to your destination.

See you on the road!