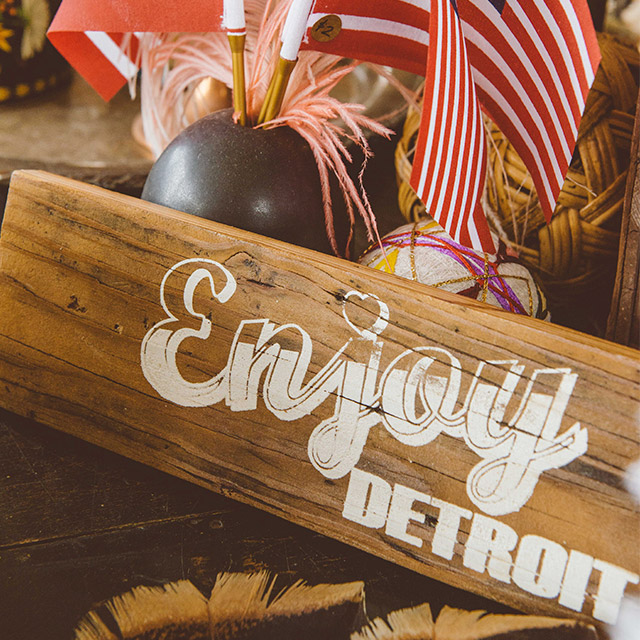 Just two years after filing for bankruptcy, Detroit is already showing exhilarating signs of rebirth—and nowhere encapsulates this turnaround quite like the Corktown neighborhood.

Located just to the west of Downtown, Corktown—technically the oldest neighborhood in the city—once primarily drew crowds to the (now-shuttered) Tiger Stadium. But today? Locals flock here for adventurous gastronomy. Indie shopping. Farmers markets. And some seriously good barbecue. Buckle up: A day is barely enough to discover this lively hub of Detroit 2.0.

Once you’ve filled up the gas tank, it’s time to replenish your own. Make Astro Coffee your first stop. Since opening in 2011, it’s become the area’s de facto java joint—and no wonder, since they source beans from top roasters like local Anthology Coffee. Pair your flat white (that’s steamed milk poured over espresso) with a treat—vegan coconut bread wins plaudits, as does the runny-drippy egg sandwich—and a chat with the friendly baristas.

Stop by Astro Coffee for a cup that’s out of this world.

Still hungry? Nowhere works the yeasty magic quite like the Detroit Institute of Bagels, who pride themselves on serving the most authentic boiled-and-baked specimens in town. If you get there early enough, you might even snag yourself a rosemary, olive oil, and sea salt bagel, which has rightly achieved Corktown cult status.

Score a satisfying hole-in-one with a visit to Detroit Institute of Bagels.

While you’re there, make a note: That green lot next door also hosts the just-launched Corktown Farmers Market, which is held Thursday afternoons from 4–7. For Detroit eats, it doesn’t get much more local than this. Vendors include the inner-city ACRE farm, which slings super-fresh fruits and veggies; Motor City Soap Company and their all-natural lip balms and soaps; and Fresh Cut Flower Farm, which grows its stems in Motor City.

Freshen up your plate with super-local greens from the Corktown Farmers Market.

Now that you’re running on joe and dough, late morning is the perfect time to get better acquainted with the neighborhood history. Originally a 19th-century Irish community, Corktown has its own historic district and rows of Victorian painted ladies. But dominating the skyline is the Michigan Central Station, a Beaux Arts wonder that went from bustling hub to down-and-out in the ‘80s. Today, it’s being brought back to life with new windows and a scrubbing-up, and, while it’s closed to the public, you can still swing by for a good Insta-grab or two.

Blast from the past: historic Michigan Central Station looks its best in 30 years.

Next on the agenda? Lunchtime—and the opportunity to try what might be the area's most famous restaurant. Widely credited with helping to kick-start the local dining scene after opening in 2005, Slows Bar BQ is famous for its brisket, chicken wings, and pulled pork, as well as its wide selection of barbecue sauces. Round out your order with mac ‘n’ cheese and waffle fries for pure, belly-filling indulgence.

Chow down on sauce-tastic comfort food at the famous Slows Bar BQ.

Suddenly feeling in need of some exercise? (Ahem, waffle fries.) Make like a local and pick up a slick set of wheels for yourself. At Metropolis Cycles, a newly opened bike shop, you can browse a selection of beauties tailor-made for gliding around city streets. Opt for a new ride or a vintage rehabbed bike for that everything-old-is-new-again vibe.

Get (bike) wheels when you want them at the aptly named Metropolis Cycles.

And speaking of: Corktown’s got a new retro hub, in the form of the Eldorado General Store. Opened last year, the boutique stocks a selection of handpicked vintage treasures sourced by owner Erin Gavle, from sequined thrifted pieces to leather purses, carafe sets, and jewelry—all arranged in Pinterest-friendly displays.

Spiff up your abode with picture-perfect wares from Eldorado General Store.

After some local culture? Make way to DittoDitto, a petite but awesomely curated indie bookstore and local publisher. Browse its spines, and also take note of its events calendar. The store will hold the third-annual Detroit Art Book Fair on October 17–18 and also hosts local author readings and other literary evenings.

Almost everywhere you turn in Corktown, old buildings are being upcycled and made new. Gold Cash Gold is no different. Once a pawnshop, the closed-down storefront was given a serious makeover before blossoming into what could be the neighborhood’s best restaurant. Against a backdrop of white-painted brick walls and herringbone-patterned wooden floors (nope, not much gold these days), diners dig into house-pickled veggies, fresh pasta with eggplant puree and confit pheasant, and burrata with seasonal pesto. Yeah, these guys mean business.

Go for the gold—in deliciousness—at the revamped Gold Cash Gold.

While the restaurant has a menu of craft brews—several made by Michigan breweries—it doesn’t get more Corktown-local than Batch Brewing Company. Hold out, then, for a post-meal tipple or two at this new addition to the neighb. A so-called “nano” brewery, Batch turns out small, err, batches of creative brews (like its hibiscus saison and tamarind wheat beer). Settle in at one of the long picnic tables and see if you can spy the gleaming fermentation tanks behind the bar. Hopping and churning that’s happening mere feet away? Now that’s local.