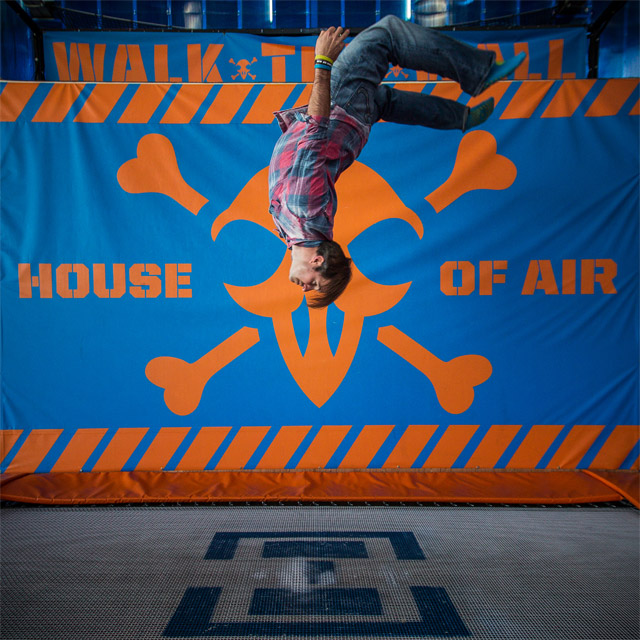 In 2003, Dave Schaeffer and Paul McGeehan were jumping on a trampoline to practice snowboarding tricks, and so began the idea for House of Air, a place solely for, well, jumping. Where would such space be possible? Finding a suitable space was a challenge until they discovered The Presidio’s airplane hangars from World War I were available as part of a larger revitalization project for the area. Embarking on this territory required extensive plans with the Presidio Trust Committee. Though the committee was enthusiastic to bring such an innovative and diverse business into the neighborhood, they required tight supervision and approval processes to preserve every element of the original look from 1921.

“It’s a living postcard of the city,” says co-founder Dave Schaeffer as he looks out onto the Golden Gate Bridge, Alcatraz and Downtown San Francisco. And it’s that very view that creates a sense of adventure just by standing here.

The idyllic view looking out onto Crissy Field.

INSIDE THE HOUSE OF AIR

On a daily basis you’ll find House of Air giving flight to the flightless for up to 70 “flyers” inside, selling out almost every weekend. But with large tech companies so focused on employee benefits and bonding, it’s not just kids’ birthdays that fill the hangar. Building tents, bringing in caterers and spilling onto the expansive greens just outside, House of Air has hosted up to 1,500 people from one local company’s annual retreat.

Giving flight to the flightless.

THE DUO THAT CREATED HOUSE OF AIR

We sat down with Dave and Paul to find out how you turn a passion for snowboarding tricks into a one-of-a-kind trampoline park.

Zipcar: What’s the hardest trick you can do here?

What’s the best piece of advice you were given in starting up your own business and who gave it to you?

Dave: Just before we opened for business, my mother-in-law said to me, "Don't worry, you can always move in with us."
Paul: Hire people smarter than yourself.  Your people are a key reflection of your business and drive positive customer interactions.

What advice would you give to young entrepreneurs?

Dave: My business partner and I got lucky on probably the most crucial issue in a partnership - division of labor. Over time, I ended up taking over branding and marketing while he concentrated on operations.
Paul: Learn how to say "No".  You can waste significant time attempting to address an item that is not a priority, and that is outside the scope of your vision for the business.

The Presidio location was originally a WWI airport hangar.

Dave: My personal favorite was when Travis Pastrana came in with a handful of other sponsored athletes. Both drummers from Metallica and Green Day have been in, separately of course. Nancy Pelosi is a regular. Seriously.
Paul: My favorite was seeing Lars Ulrich in the park with his family. I'm just waiting for James Hetfield to show up so I can tell him that he used to babysit my wife. True story.

Who is Simon and who is Garfunkel? Lennon or McCartney? Hall or Oates?

Dave: We are more like Bill and Ted having a most excellent adventure.
Paul: (high five’s)

Ready to zip on over to House of Air? Grab a Zipcar in the Bay Area.

BY LAUREN BREUNING // PHOTOS BY SEES THE DAY PHOTOGRAPHY