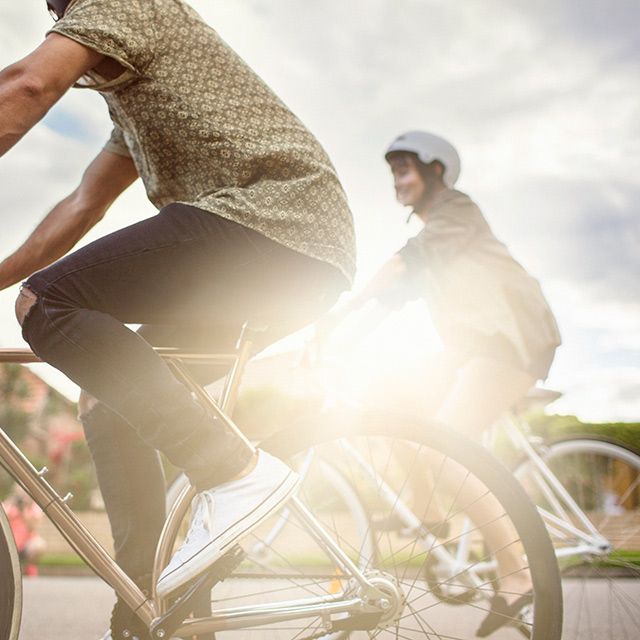 Biking in the City: How to Ride in a Group like a Pro

If you want to look like a pro on your rides, first you’ll need a proper bike fit and a well-maintained, clean bike. Having to listen to your own squeaky bike is bad enough, but having to hear it from your friends on a group ride is even worse! As an active racing team, Green Line Velo members are used to racing and riding in large groups. Working well together is not only important in races (like being able to establish a breakaway or setting someone up to win the sprint), but it’s also important for successfully riding as a group. Following proper riding etiquette ensures that a group will ride as efficiently as possible, and keeps everyone safe.

If you’ve been to our Wednesday Night Group Rides, you already know the basics about key hand signals that alert the people behind you to upcoming obstacles, traffic lights, and turns. An open hand in the air accompanied by a quick shout of “slowing” will inform everyone they need to stop pedaling and slow down with their brakes. A fist in the air and maybe a shout of “stopping” will let people know a stop sign or stoplight is coming up. When you need to use your brakes to slow down or come to a full stop, pull the levers smoothly and increase pressure slowly— pulling too hard can result in skidding rear tires or a superman ejection over the handlebars. And on group rides, a smooth slowdown will allow the people behind you to respond and avoid running into you.

Just as they do when you’re biking on your own, the normal turn signals apply in a group: right arm/hand to the side for right turns, left arm/hand to the side for left turns. If you’re approaching a parked car or perhaps some pedestrians, give your right hip a good slap since that’s where the obstacle will be in most cases. If the obstacle is on the left, slap your left side. Lastly, call out and point to potholes in the road. A big pothole can break your wheel—or worse. If you don’t see the pothole until it’s too late, you’ll have to ride through it and avoid any sudden movements that could cause a crash. And don’t forget to alert the other riders!

Don’t be shy…shout out obstacles to cyclists you haven’t met yet! (We’re all friends here.)

When riding at the front of a group, pedal smoothly and keep the pace steady. This means that when there’s a rise or climb, you only increase the pressure on the pedals a little bit. If you decide to really push hard, you can split up the group behind you. You’ll often want to shift to an easier gear when hitting a climb to keep your cadence up. To ensure proper shifting, briefly take a bit of pressure off the pedals while you’re switching gear. This will keep the chain moving smoothly over the cogs or from one chainring to the other. Too much pressure on the pedals can cause gears to jump or skip in the back, or your chain to drop off the chainrings in the front.

Everyone in the pack needs to “hold the wheel” in front of them, which means minimizing large gaps between riders to keep the pace steady. If you do notice a gap, close it by accelerating smoothly so that the people behind you can respond easily, rather than everyone sprinting to catch up and then braking because they have more momentum than the group in front. When you decide you’ve had enough time at the front, move to the side and let yourself drop back. The folks moving up from second wheel to the front will have to maintain the pace and shouldn’t speed up. This means they only need to increase the amount of power they’re putting out by a little bit.

When turning in a group, it’s important to choose your line and then hold it so that you don’t run into other riders. Ideally you stay on the wheel of the person in front of you, but you can let a bit of a bigger gap go just before the turn to make sure everyone stays safe.

Being doored is one of the leading causes of injury to cyclists, so keep an eye on parked cars near the bike lane.

We’ve already talked about key signals to keep everyone safe when riding in a group, but it’s also important to adhere to some basic guidelines to stay safe when riding through traffic. It’s important to both be visible and have good visibility of the traffic ahead of you. From this perspective, it’s better not to ride in the drops if you have curved road handlebars. When you're in the drops (the lowest handlebar position for most road bikes), you can't see as far ahead as when you're on the hoods, which is the higher position. You also can’t turn your head as easily, and since you’re lower to the ground, cars will have a harder time seeing you.

It’s better to ride a bit defensively (especially near intersections) and assume you are not seen by the drivers. Many cars will not signal when they make a right-hand turn, and some also don’t use their mirror before turning. Even when you’re in the bike lane and you can move up and overtake stopped or slow moving traffic near an intersection, you either want to be fully in front of the car or behind it. If you’re fully in front they will see you and can give you the right of way. If you’re fully behind a car and expect the driver to make a turn, you’re not going to get caught in the cross hairs. Be particularly aware of trucks and buses that appear to be moving towards the left lane, as they’re likely creating enough space for themselves to make a turn and you’ll want to stay behind them. Finally, when waiting for the light to change, don’t wait in the crosswalk so pedestrians can cross.

You also may come across double-parked cars, forcing you to move into traffic. It’s a good idea to look back over your left shoulder to make eye contact with the drivers and use your left hand to signal you need to move over. In my experience, cars will generally slow down when you make your intentions clear, and will give you the space you need. When the light is red and there’s enough space on the right, you can try to move up towards the front so that when the light turns green all the drivers know you’re there. Once the light turns green, you can take the space you need. When it’s clear to drivers where you are, they can move around you. Try not to ride too close to parked cars to avoid getting doored if someone inside unexpectedly opens the door to get out.

In general, just obey the traffic laws, be safe, and communicate with others on the road. Oh, and enjoy the company of your friends!