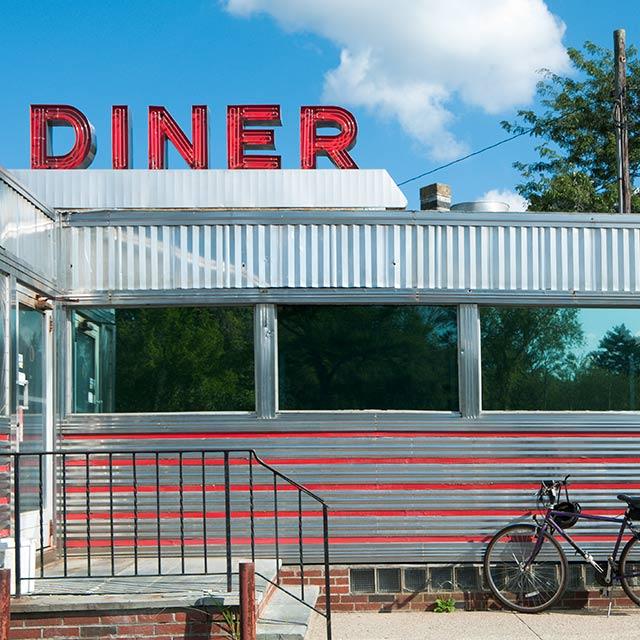 The History Behind Classic Americana

This Flag Day, what better way to appreciate “Old Glory” than by exploring some everyday American symbolism your history books probably missed? From baseball and apple pie to diners and rock n’ roll, let’s take a closer look at quintessential Americana. Here’s what you need to know (and what you have to experience up close) to get a true taste of the good ole’ USA...

Check out local bakeries to find your favorite version of America’s most famous dessert.

You know that saying, “as American as apple pie”? Fun fact: its meaning is a bit of a misnomer since the only apple native to America is the crabapple, a tart cousin rarely eaten (much less baked in flaky crust.) But you could say the pastry’s coming to America mirrors an immigrant’s journey, since the first apples only came into the country in the 17th century thanks to colonial settlers. In fact, the apple pie as we know it has grown and evolved from recipes imported from the British, Dutch, and Swedes.

Today, apple pie is a mainstay of iconic American culture, and you can find them in most neighborhood bake shops. Get yours with a scoop of ice cream at the aptly named À La Mode bakery in Seattle, or try the farmers’ choice, skin-on apple pie at Three Babes Bakeshop in San Francisco. Just outside of Atlanta, sink your teeth into Crave Pie Studio’s rendition, which includes cheddar crust and bacon streusel. In New York, take a bite with a hint of bourbon in Brooklyn’s Four & Twenty Blackbirds. Or, give thanks for the Chinese five-spice recipe at Chicago’s Hoosier Mama Pie Company.

Swing for the fences. Hit a homerun. Strike out. Baseball is so embedded in our culture, even its rules have found their way into everyday conversation. Baseball is an age-old national American pastime invented by a volunteer firefighter and bank clerk named Alexander Joy Cartwright. He essentially adapted the British game of cricket adding new rules that would make it a faster-paced (yes, it was once slower!) sport played on a diamond-shaped infield with foul lines and the three-strike rule.

When in Baltimore, order Chesapeake Fries at their picturesque bayside stadium, Camden Yards. These waffle fries covered with mounds of fresh Maryland crab are a snack worthy of any section. At the historic Fenway Park in Boston, you can catch the Red Sox one night and a Billy Joel or Lady Gaga show the next. And it’s always a great day for a ballgame in sunny San Diego’s Petco Park where you’ll get expansive skyline views to go with the perfect weather. Add in a vast selection of craft beer and craftier concession stands that offer everything from tacos to raw oysters, and you’ll be singing “Take Me Out to the Ball Game” every day.

Experience a piece of music history at the Troubadour in LA.

Travel to another country and you’re sure to hear American classics like Elvis, Bob Dylan, or Ella Fitzgerald—as well as American hits of today. Whether it’s rock ‘n roll, jazz, blues, or country, music made in the USA resonates everywhere.

New Orleans may be the birthplace of jazz, but there are some speakeasies to speak highly of in several cities across the country. Austin, Texas has The Elephant Room where the venue's neon sign draws audiences to the oh-so-cozy basement space. Or, kick your boots up in Milwaukee at the aptly named Bootz Saloon, where you can rest your tap shoes while sampling southern BBQ…or test your mettle on the mechanical bull. Speaking of metal, if banging your head is more your speed, rock out at the Troubadour in Los Angeles: it’s where many music titans made their debuts. Lastly, let’s not forget American-born hip-hop. Get your fix at a venue like Brooklyn’s Music Hall of Williamsburg that rotates artists of every genre.

Fulfill your fast food cravings at a classic American diner.

Americans can be portrayed as gluttons for fast food, but did you know that the precursor to fast food was actually the diner? When it comes to a symbol of the American way, the greasy spoon is a beloved institution. Diners originated as lunch wagons to feed workers with later hours over 100 years ago, and from burgers and shakes to breakfast all day, roadside diners still serve up comfort foods that reflect a home away from home.

Where can you recapture that nostalgia on a grill? When in Detroit, stop by Telway Hamburger System for sliders and fries that have been a family tradition since 1944. And at $2.50 for four sliders, the prices are a throwback, too. Simplify your math at the S&S Diner in Miami where the must-order menu item is the 2-2-2-2 (eggs, bacon or sausage, pancakes, potatoes, and coffee for $8.99) every day of the week. And if you’re in the Twin Cities area, get stuffed at Al’s Breakfast, the narrowest diner in Minneapolis at just 10 feet wide. This small eatery has a big reputation for its blueberry pancakes. And while we’re going big, nothing compares to a Texas-size plate at Norma’s Café in Dallas. From the country breakfast to the Blue Plate Specials, you could say everything is eNormausly satisfying.

Celebrate the Red, White, and Blue

This Flag Day, join us in pledging allegiance to some authentic Americana. Get to know what unites us by road-tripping your way around each national favorite. June is a perfect time to hit your nearest baseball park, catch a live music show, or pull an all-nighter at your local diner. As for pie, well…any time is a great time for pie. And with July 4th only a few weeks away, you can celebrate what makes America special all over again. After all, that’s what birthdays are for.