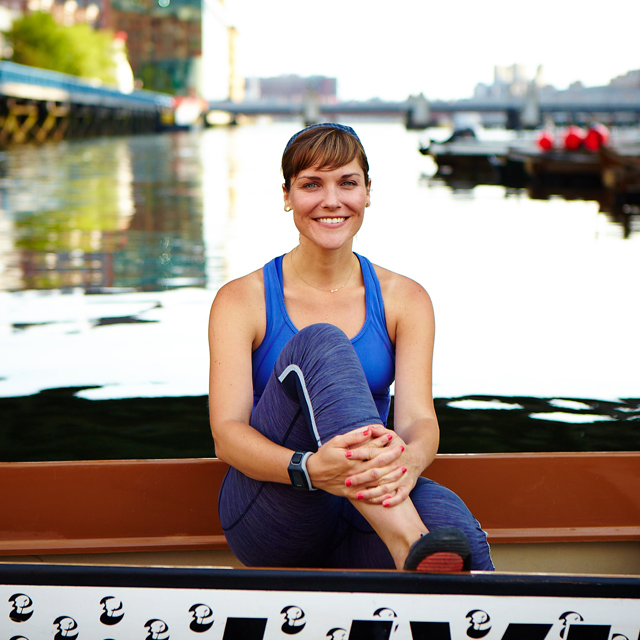 It should come as no surprise that Melissa Pocek, a Content Marketing Manager, has a keen interest in storytelling, photography, and even some other creative endeavors on the side. But what may surprise you when she’s not on wheels (bicycles, as well as Zipcars, natch), she gets around by…dragon boat?

We chatted with Melissa to learn more about her unconventional seafaring ways, plus what inspires her behind the scenes of this online magazine.

Melissa feels right at home on the docks of Boston Harbor — just minutes from Zipcar HQ.

Zipcar: First things first: What’s dragon boating? And do people know what it is, right off the bat?

Melissa: I always have to explain it by saying it’s like being on crew for rowing, except we’re not rowing, we’re paddling. Sometimes people ask, “Isn’t it a Chinese sport?” So I say, “That’s accurate. It was started there as an ancient ritual amongst villagers, but that was 2,000 years ago.” It’s since grown and become popular pretty much everywhere except the U.S.

Yeah, I…totally knew that. So, how’d you get started? And were you familiar with the sport when you began?

I started because I was hanging out with friends from a different graduate program at Harvard than mine [she has a Master's in journalism] who were all from different countries and also big dragon boaters. The head coach (from Australia) mentioned it to me, and even though I had no idea what a dragon boat was before I looked it up, I committed. (Some friends can persuade you to try pretty much anything!)

What was your first experience like in the boat?

For the first 10 minutes, I was overwhelmed by the intensity! There’s someone at the very front who coaches you and commands orders to go faster, slow down, or stay on time with the rest of the crew while you’re paddling on a big boat that has about 20 people on it.

It took me about 20 minutes to start getting into it. The switch for me was that I was being challenged in new ways. I’m big into running, but I hadn’t been on a team sport since elementary school. On top of that, you’re working muscles in your back, shoulders, and abs that you’ve literally not been working before.

Even though I wound up completely sore, it was a great experience to be hanging out with my friends in a different way. And with 45 people in the club, and the minority of them from the U.S., there’s no lack of conversation (mostly revolving around food…).

The dragon boat team that paddles together, wins together.

Sounds intense! What kind of training does it entail?

We train on the river (just steps from Zipcar HQ) three times a week: Mondays, Wednesdays, and Saturdays. The first part of training is burpees, planks, push-ups, and stretches to warm up and get your muscles engaged. Afterwards, we do a series of team stretches. We’re also heavily encouraged to work out by doing yoga, running, and other cardiovascular exercises.

We’re usually not weightlifting, though, because we get enough of that on the river! There’s actually a really great quote that one of the coaches told us: “If you’re having a bad day, don’t bring it to work, or your boyfriend or girlfriend — take it out on the river.” It’s just a really positive way to release any stress that you might be having, feel great, and get some awesome muscles to boot.

I hear your team, Boston 1, is super competitive. What are the races like?

We are a really competitive team; we race and usually win. But the great thing about dragon boating is it brings the same sort of atmosphere to each individual team. So each team has different backgrounds and age groups, and the people we race against we see on a monthly basis all throughout different race courses throughout New England.

So we travel all together, see each other at races, and while we’re competitive with each other — both jokingly, and also seriously — after we’re done racing, it’s all about hanging out.

Coach Vince keeps Boston 1 on a synchronized stream of success.

Word on the street (err, river) is you were one of 13 paddlers from your team selected for a special trip to China that their government financed. What unique skills do you bring, and what was that trip like?

The sport is popular in just about every other European, Asian, and even African country. And just about everyone from those countries had been training to do this since they were little kids, while most of us started in our 20s. So…they beat the pants off us! But all of the international athletes stayed in one big hotel room, shared meals together in a banquet hall, and enjoyed the culture of China. So it wound up being an incredible experience.

As for why I was chosen to compete there, I have this weird, uncanny ability to get in the zone when I run, and when I paddle. I also have a lot of stamina when it comes to really intense workouts, which means I can work at a high-level pace and not crap out.

Your coach beats a drum to keep the pace of the paddling. Because it’s repetitive — almost meditative — I can follow that in a trance, while still paddling as quickly and rhythmically as I need to.

What other athletic activities do you pursue? And how are they different from dragon boating?

I bike everywhere — that’s my main means of transportation. In fact, most of us on the team are avid bikers, so we look like a bike gang with paddles hanging out of our backpacks! I also do yoga and I run, including completing my first triathlon (which I took a Zipcar to get to), Tough Mudder, and the New York Marathon last year (two days before starting the job here! I was still limping on my first day).

The difference for me is that with dragon boating, it’s about being a member of a community, participating in it to make it a better place. I’m in it to win, but I’m also in it to learn from everybody on my team. Everyone there comes from a completely different background from me, from career to country of origin — it’s like the UN on a boat! To see that we all get along so well, it could be considered a small paradigm for the way cities or communities can behave and cooperate.

All smiles (and some sore muscles) at the end of another challenging practice.