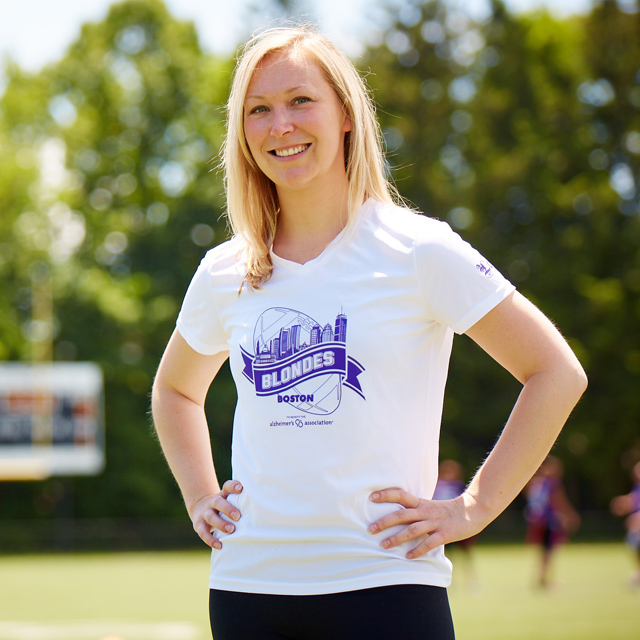 A Young Voice for Alzheimer’s

Carrie Allen, one of our senior managers of field marketing, is a confident leader and positive force at the Zipcar office, and those are the very skills she pours into her efforts advocating for Alzheimer’s outside of work. With a family history of Alzheimer’s, a debilitating disease that affects more than 5 million Americans, Carrie has dedicated her time to working with the Alzheimer’s Association, the world’s leading voluntary health organization in Alzheimer’s care, support, and research. Carrie sat down and told us about the impact Alzheimer’s has had on her life and her efforts to bring it to the forefront of people’s minds.

Carrie and her beloved Pollygram; taking action for Alzheimer’s on Capitol Hill.

Zipcar:  Can you give us a little background on Alzheimer’s?

Carrie: Alzheimer's is a type of dementia that causes problems with memory, thinking, and behavior with symptoms usually developing slowly and getting increasingly worse over time. It is the 6th leading cause of death in the United States and it greatly affects not only the lives of those diagnosed, but also those who often give up their own lives to be caregivers.

How has it affected your family?

Alzheimer's disease has had a profound effect on my family. I remember hearing stories about my great-grandmother who suffered from Alzheimer's and passed away shortly after I was born. There were happy stories and then there were the stories about how additional family members had to take care of her. In those days, it wasn't called Alzheimer's and it wasn't something people talked about. My own grandmother, Pollygram, started showing symptoms around the time I went off to college and that’s when I felt compelled to take action.

How did you first get involved with the Alzheimer’s Association?

I sought out the Alzheimer’s Association in NYC. They have a young professionals group of the Alzheimer's Association Chapter and I was able to use my marketing and event-planning skills to make a difference by helping to organize events and fundraisers. More importantly, I found a group of people my age all dealing with Alzheimer's in their lives who were also passionate about making a difference.

The Blondes vs. Brunettes teams in full force; Carrie warms up before the big game.

Could you tell us more about your activities with the group?

I had a hand in many events and fundraisers, though the closest to my heart is the Blondes vs. Brunettes flag football game. Similar to organized walks or runs for causes, Blondes vs. Brunettes is a flag-football game of 50 inspiring, athletic, and dedicated young women and volunteer coaches who play in a game to raise awareness and funds for the Alzheimer's Association. Since the game started in D.C. in 2005, it has spread to over 40 cities across the country and has raised over $5 million for the Alzheimer's Association. When I moved to Boston, I knew we needed to bring the game here, too.

That sounds fun! Why do you think it’s such a successful event?

I love Blondes vs. Brunettes because women are disproportionately impacted by Alzheimer's; almost two-thirds of Americans with Alzheimer's are women. We are also more likely to be caregivers of those with Alzheimer's. This event gives so many young women who have watched loved ones affected by Alzheimer’s — from parents to grandparents to friends — a way to take a stand against the disease, and in a way, to band together.

I joined the Boston chapter of AlzTogether, the young professionals group associated with the MA/NH Alzheimer’s Association, and last year, we hosted the first Boston Blondes vs. Brunettes game. I was elected as the co-chair of the chapter, and this year, we’ve raised over $63,000 — and we’re still fundraising until the end of the month.

A spirited start to the competition; the players go all-out on the field.

What are some of the biggest challenges and misconceptions the disease faces?

Alzheimer’s is not an old person’s disease like many think. Not only does it affect the entire family when a relative is diagnosed, early on-set Alzheimer’s diagnosis is growing. By 2050, the number of people age 65 and older with Alzheimer's disease is predicted to triple to as many as 16 million. Alzheimer's disease is also the most expensive condition in the nation. In 2014, the direct costs to American society of caring for those with Alzheimer's will total an estimated $214 billion.

How do you cope with the future possibility that you may suffer from the disease?

It’s not about me suffering; it’s about not having my children have to go through it. Before my grandmother went into a nursing home, and even still, I see the toll that caring for her has taken. All we can do is keep working to bring awareness and funds to the research.

While the past 10-15 years have brought more clarification and hope, there’s still so much we don’t know and still no cure. There are some trials available that you can get tested for that include lineage mapping, early drug trials, and other monitoring. My mom and I are planning on getting tested this summer.

The blondes reigned victorious, but the giant half-time check named the real winner.

How will you continue to spread the word?

When someone like me walks into a room, a young face for a so-called “older person’s” disease, people pay attention. If we can continue to engage the younger generation to take a stand, we can make an impact. I want my children and grandchildren to learn about Alzheimer’s in their history books, not from firsthand experience with their grandparents or parents.