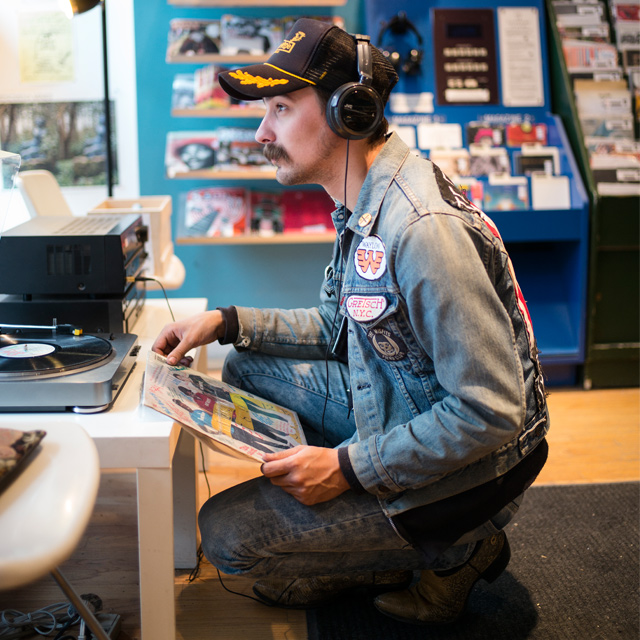 For Chicago's West Town neighborhood, old-and-under-the-radar is the new wave of charming and cheeky. Defined by re-purposed items and classic bites, this side of town is even better when you know where to pull up your Zipcar ahead of time. If you're looking to do some vintage shopping, rock out to records from ZZ Top to Toto, and sample some homemade pie, West Town is your mecca. Oh — and we realize this is a little strange, but it also happens to be the place to go in the entire Midwest for cowboy boots.

West Town Bakery & Diner (1916 W. Chicago Avenue, Chicago, IL 60622; 773-904-1414; westtownbakery.com) Bearing the namesake of its 'hood, this spot is a diamond in the rough — and it actually sparkles with neon signs and glitter padded chairs.  The atmosphere, with its partially exposed brick and murals walls, is colorful and fun-filled, much like the doughnuts made in house. Go on a Saturday afternoon and the staff will hand you a small, warm cinnamon and sugar doughnut while you wait.

If you’re ordering breakfast, try the corned beef hash or baked eggs and "soldiers" — and be sure to add on a cup of joe. They serve Chicago-brewed Dark Matter Coffee (738 N. Western Avenue, Chicago, IL 60612; 773-697-8472; darkmattercoffee.com), which is a local’s favorite in the West Town area. Pro tip: Order the pretzel doughnut once you’re seated.  With its stout-infused glaze, caramel/chocolate drizzle, and pretzel crumb dusting, this tasty creation won the People’s Choice Award at Chicago’s annual Donut Fest this year.

Added bonus: This place is vegan-friendly and has been certified by our friends at Green Restaurant Association.

Hoosier Mama Pie Company (1618 W Chicago Avenue, Chicago, IL 60622; 312-243-4846; hoosiermamapie.com) Yes, the owner, Paula Haney, went to Indiana University. And yes, people from Indiana clearly make the most delicious pies in Illinois. Be sure to order two days ahead — they still bake the old-fashioned way and all the pies are made to order. Ask for the best pie of the day; it often changes. One day it might be apple cranberry walnut crumble, the next, chocolate cream. Any way you slice it, you’ll get a flaky crust — simultaneously soft, crunchy, and sweet, with a hint of salt. This place takes you back to the basics, leaving you all warm and fuzzy inside (and full of pie­).

A baker keeps her eyes on the delicious pies at Hoosier Mama Pie Company — and so will you.

Seek (432 W Chicago Avenue, Chicago, IL 60642; 312-526-3164; seekvintagechicago.com) Seek and you shall find! You'll want nearly everything in this superbly organized shop. (Even the men's dress shirts are color-coded on the rack.) It's obvious that these pieces have been sourced with love from all over the country. The shop is a treasure trove of board games, patent leather purses, white leather boots, crystal punch bowls with glasses dangling from the edges, notecards, oversized sunglasses, a rainbow of neck ties, ancient clock radios and desk lamps, puzzles...and a partridge in a pear tree. (Not really, but I'm sure co-owner Chris Hunt could find you one if you want.) Tip: Also check out a nearby close runner-up to this vintage marvel: Krispy Fringe (2130 W. Chicago Avenue, Chicago, IL 60622;773-710-1006; krispyfringe.com).

Flip through colorful, cool, and chic vintage wares at Seek. Who knows what you’ll find?

Permanent Records (1914 W Chicago Avenue, Chicago IL 60654; 773-278-1744; permanentrecordschicago.com). Upon entering, you might hear Celtic music with a jagged edge playing from the speakers above (not dissimilar to the flying monkeys’ entrance in the Wizard of Oz). Quirky individualism mixed with a smidgeon of rebellion is not a point missed among the mannequin with the Nixon facemask and poster of Johnny Cash flipping the bird to a camera. In a nutshell, this place is downright awesome.

Permanent Records packs a punch, with killer stock from psychedelic to rock and garage, and folk to blues.

Specializing in both new and used vinyl, its inventory runs the gamut from psychedelic to rock and garage, to folk and blues. For a little shop, it’s an impressive assemblage. If you’re looking for old-school David Bowie, an obscure space rock album, or tried-and-true household names like the Beatles and Stones, look no further. Original legendary albums like Buddy Guy, Black Sabbath, Fleetwood Mac, the Smiths, Alice Cooper, Michael Jackson, and the Flaming Lips are hidden gems throughout — underlining the store’s apt slogan: “Life is Short, Buy More Records.”

The Silver Palm & Matchbox (768 N Milwaukee Avenue, Chicago, IL 60642; 312-666-9322; thesilverpalmrestaurant.com) Don’t panic the first time you spot this place.  It may look like a Chicago Transit train ran straight into a building, but it’s none other than a unique dining experience.  This spot will take you all the way back to 1947, when the silver train car that now doubles as a dining room was built. Named after the Atlantic Coast Line Railroad, the Silver Palm’s menu features dishes from all over the country, where the train might have carried you when its wheels were active — from the New York Central's blackened salmon to the Southern Pacific Railway's Louisiana fried chicken. But the menu winner, touted by Anthony Bourdain as the “best sandwich in America,” is The Three Little Piggy made of double smoked and braised ham, pork tenderloin, bacon, fried egg, and gruyere cheese.

The Silver Palm’s dining room — a railroad car from 1947 — is a literal (and tasty food-filled) blast from the past.

If you have a hankering for an Old Style to wash it down, the Silver Palm’s dining car runs right into the Matchbox a tiny tavern that’s stood there for 75 years. Tip: In the summer, sit along the sidewalk café, which is housed inside of real railroad signals, creating the effect of being at an actual crossing.

Alcala's Western Wear (1733 W Chicago Avenue, Chicago, IL 60622; 312-226-0152; alcalas.com) We saved the best (and biggest) for last. There are literally giant horses leaping off the sides of this building. Horns jut out from around the inside perimeter of the store, which is full of leathers and tassels and boots, oh my! This Western-wear hub has been a staple in the West Town neighborhood for 42 years, handed down from one generation of the Alcala family to the next since 1972.

Authenticity is key at Alcala’s Western Wear, from the rugged cowboy boots to hats shaped by steam.

Much like the current owner, Rich Alcala, the store’s got character, likeability, and an unmistakable presence. A self-proclaimed piece of the Lone Star State in the Windy City, there’s an enormous supply of hats and boots (5,000 and 8,000 respectively) stacked high to the ceiling. So make like Kramer, and giddy up. (P.S. There's a Zipcar named Sheila in their parking lot with a trunk big enough for all those boots you just bought.)