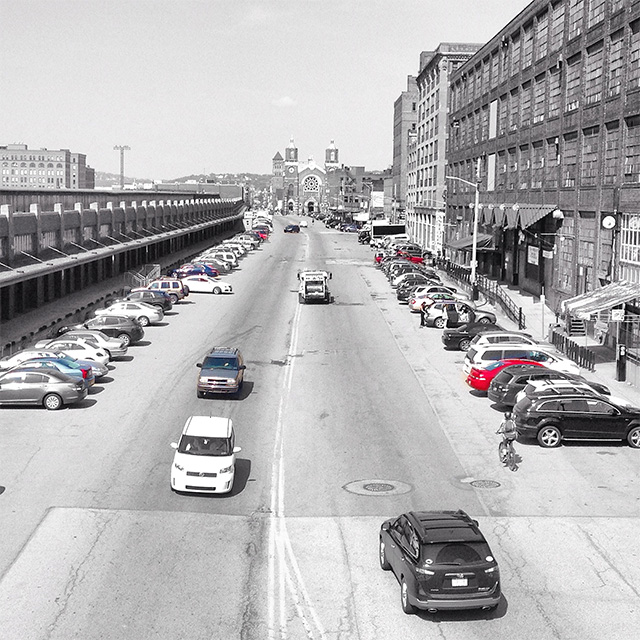 An aging stone clock tower, walls of fresh scaffolding, a skyscraper banked by blue skies and a puff of cloud. This is the Pittsburgh revival seen through the eyes of the city’s amateur photographers. Collectively, they are the Steel City Grammers (as in Instagrammers), whose Instagram handle—born in April 2014—has become the most popular destination for those working to chronicle moments in the urban landscape.

With city living and exploration in their blood, the Grammers were the perfect fit to take a commissioned photo series representing characteristics of Zipcar as part of the city’s transportation platform—and more.

“We’ve sought to feature people [through the Instagram account] who are proud of Pittsburgh,” says Tyler Haak, who snapped the below photos, with fellow Grammer Greg Scelp along for the ride. “That pride shows through with something they saw and just thought was cool, a little bit of art. When more and more people contribute to the site, it gets stronger—just like the city itself.”

DAY TRIP (above left)
From behind the wheel of a Zipcar, Tyler and Greg spent a day exploring the city’s many neighborhoods. The contrast of these two doors taken together captured Tyler’s attention as he was “out gallivanting.”

LITTLE GLIMPSES OF ART (above right)
As he took in the neighborhoods, Tyler noticed the way familiar vistas changed and came to life when captured in a different frame, like this view through a pop of yellow.

PARK HERE (above left)
This mural advertising a parking garage reminds Tyler of the challenges the city faces with the population surging. Rather than simply build more garages, the city can reduce the number of cars through the use of public transit and car sharing.

ONE IN FIFTEEN (above right)
Car sharing enables one shared car to stand in for fifteen private cars. On this canvas of muted black and white, taken from the 16th Street Bridge overlooking Smallman Street, one car for every fifteen is lit up in color.

“NO ONE LIVES HERE YET” (above left)
Tyler captured the much-anticipated Alcoa building before its July opening. Formerly an aluminum factory, the building will soon be home to hundreds of people and families embracing city living.

END OF THE DAY'S ADVENTURES (above right)
The last picture Tyler posted from his getaway was this view of the West End Overlook. “We drove up a big hill to the overlook after a long day of exploring. The activity that you can see all over the city, the fountain, the boats…. It was a beautiful day.”

What’s your favorite Pittsburgh photo from the batch? Tell us your top picks—and share your own city scenes with us—on Instagram.

NationalConsumerPittsburgh
BY KAREN DEMPSEY // SKYLINE PHOTO BY JEFFREY TANENHAUS, ALL OTHER PHOTOS BY TYLER HAAK