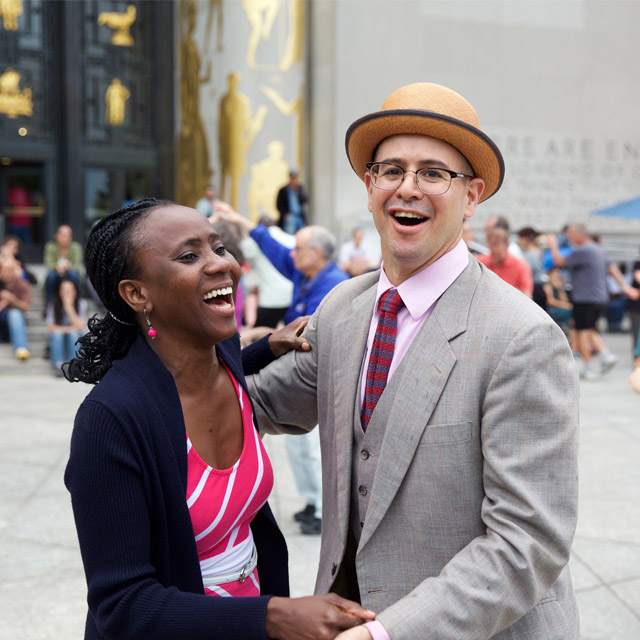 Shelve the outdated perception that libraries are dusty depositories for printed works. At Brooklyn Public Library, digital age technology comfortably coexists with books and a rich agenda of events is attracting recording-breaking crowds.

In a borough as hip and happening as Brooklyn, the public library is proving it can not only keep pace, but also set a national example with innovative programs. Take our tour of the coolest—and most surprising—features you’ll find.

Fun at the Brooklyn Public Library starts before you even walk in the (insanely impressive) door. Photo by Gregg Richards.

The Central Library, across the street from iconic Prospect Park and Grand Army Plaza, attracts a million visitors each year, and is a hive of activities not normally associated with a 74-year-old research environment.

But wait—there’s more. Cultural performances always draw crowds, and the Dweck Center screens movies and hosts author talks. It also stages chamber music, pop, and jazz concerts. Those wanting to bust a move of their own can dance at Plaza Swing, an outdoor summer series featuring a 20-piece swing band.

Others are drawn to Central Library for more practical reasons. idNYC, the city’s new identification for residents (regardless of immigration status), can be obtained here. Among other uses, the ID functions as a unified library card for the separate New York, Queens, and Brooklyn Public Library systems.

And for those venturing beyond the borders of the city—and country—an on-site passport office staffed by library employees is also a revenue earner.

“The biggest advantage is that we’re able to bring library services to individuals coming in for these other services, and they’re learning about how libraries can help them,” says Samantha Dodds, Director of Corporate Relations.

Enriching (and enjoyable!) projects abound for kids of all ages. Photo by Stephen Mallon.

In family-friendly Park Slope, branch manager Stephanie Brueckel says that seating is always at capacity for children’s programs: “We have people lined up outside in all weather conditions an hour before a free children’s story time event.”

Park Slope also has a weekly Zumba class, highlighting the community center aspect of the building. “It’s a little loud, but only for an hour, and it’s not like the whole building is shaking at the base,” Brueckel says with a laugh.

MEETING THE NEEDS OF UNDERSERVED POPULATIONS

Brooklyn is a large and diverse borough (almost half of Brooklyn residents speak a language other than English at home), yet most residents live within half a mile of their nearest branch. These libraries serve as convenient community centers with programming catering to local demographics, including events in other languages, such as Spanish, Russian, and Polish, as well as Immigrant Services that help new Americans and new New Yorkers.

“A library is one of the most welcoming, safe spaces you can come to whether or not you have legal status,” Dodds says. “Immigrants come to our libraries without fear, and we have incredible resources: legal services, English for Speakers of Other Languages (ESOL) classes, business English classes, and citizenship exam prep.”

Prisoners and their families also benefit from library initiatives. TeleStory enables incarcerated adults to read or sing to their children using real-time video conferencing. The library provides the same book to the parent and child.

“It’s difficult for families to go to Rikers Island, so we set up a video conference in Central Library. Kids come with caregivers and the incarcerated parent reads to them,” Dodds says.

The inspiring success of TeleStory makes it a potential model on a national scale to strengthen bonds between imprisoned adults and their kids.

Brooklyn Public Library knows that bikes *and* books can take you to new and exciting places. Photos by Elizabeth Leitzell.

PUTTING THE “FUN” IN FUNDRAISING

The library has also found new ways to engage the community while adding to its coffers. Brooklynites love bicycles, and the library’s third annual Bike the Branches was the most popular and competitive to date. The winner biked to 40 of 60 branches the day of the ride.

In addition to welcoming cyclists, each branch hosted free programs, including those not typically open on Saturdays. In Greenpoint, recycled plastic bags were cut up to make handlebar streamers. “This is more than a fundraiser, it’s a community celebration,” Dodds says.

Not that the system is going it alone. In Brooklyn, libraries—pioneers of the original sharing economy—are partnering with Zipcar, a model of the new sharing economy, to earn revenue in creative places. In this case, parking spaces.

How it works: Some staff spaces—previously inaccessible to the public—are now home to Zipcars. Zipcar rents the spots from BPL, with car-reservation earnings going directly back to the branch. Active at three locations, the program is about to expand to six more.

It’s a win-win for the libraries, since each branch can spend the funds where they’re needed most. Bay Ridge hosted writing workshops for adults and partnered with a local opera company to host a free performance for seniors. Bedford-Stuyvesant purchased a carpet to brighten the children’s reading area and hosted a kid-friendly steel pan performance. And, of course, as the program expands, many more features will come to life.

PRESERVING THE PAST, ONE STORY AT A TIME

Providing services that apply to all branches is also top of mind. Development pressures throughout the borough are rapidly changing the streetscape, and older generations are keepers of memories of the Brooklyn that was. Last year, the library launched “Our Streets, Our Stories,” an oral history project that records personal accounts and photographs about living in Brooklyn…before it was hip.

A mobile digitalization lab circulates among libraries to help Brooklynites scan old photos, fliers, and other documents that can be uploaded to the library’s website and added to the Digital Public Library of America.

Brooklyn Public Library is also the largest provider of free Wi-Fi in the borough, and usage increased 40% from 2013 to 2014. All 60 branches have desktop machines and computer literacy programs for all ages. Many also have eBook, tablet, and laptop loaners.

"Libraries are a place where people go for free access to technology,” says Communications Coordinator Adam Leddy. “The way we serve people has changed, but the need for us hasn't changed."

Yet, the shift isn’t entirely towards digital. Even with new technology and forward-thinking programming, libraries are still popular for what they've always done. “People come in and check out books, too,” Brueckel confirms.

About the Author:
Jeffrey Tanenhaus is a Brooklyn-based writer, photographer, and tour guide. His New York City Essential Guide app is a hit with tourists. Most recently, Jeffrey is a tourist himself, as he crosses America by bike share and blogs about it at Countri Bike.