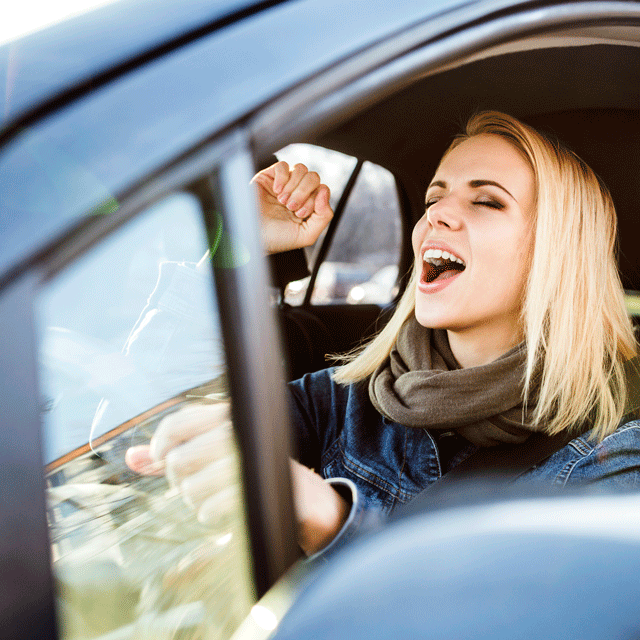 The Best Grammy-Nominated Songs to Sing in the Car

The 58th Annual Grammy Awards are rolling out the red carpet this Monday. As frequent road trippers, we know a thing or two about good tunes, so we put some of this year’s best to the test.

We surveyed over 2,000 music lovers about the 2016 Grammy nominees for Song of the Year—and it’s a close call. From the top-nominated Kendrick Lamar to the country breakout Little Big Town, this year’s roster has huge potential for in-car karaoke. (Although we still have a soft spot for in-car comedy.)

So which was their favorite song to sing in the car? Taylor Swift’s “Blank Space”—no surprise, if you’ve ever belted that one out. (“I didn’t choose it, it just came on the radio, I swear! Uhh, and I know all the words.”)

The other four nominations didn’t fall far behind. Next time you’re stopped at a red light, look around and you’ll likely see someone crooning to Ed Sheeran’s ballad, “Thinking Out Loud,” or Little Big Town's (equally romantic) “Girl Crush.” And despite their immense popularity on the radio, Wiz Khalifa’s “See You Again” and Kendrick Lamar’s “Alright” didn’t rate as highly on the karaoke scale. (Fortunately for our passengers, we know our vocal limits.)

Here you have it: this year’s Grammy nominees for Song of the Year, in order of their karaoke popularity. And since we know music can determine the mood of the drive, we give our soundtrack recommendation to match each song to a type of Ziptrip.

Tay has had quite the year, both in and out of the studio. So after countless tabloid stories about her dating life, she did what she does best: recorded a song that tore down the haters.

Just when you think this is a song for the preteens, consider this: the top “Blank Space” voters were ages 65+.

Ziptrip soundtrack for: treat yo’self day. Pack in your squad, forget the rules, and let out your true self. You do you.

Ed Sheeran stole our hearts and jumped the charts with his album, x. The love-drenched “Thinking Out Loud” gets us feeling sappy and we just might love this song until we’re 70. A full fifth of our respondents tapped this ballad as their go-to karaoke of 2015.

Some regions are feeling the love more than others. In Oregon, Sheeran ranked on top (with Taylor’s satirical tune dead last). Guess the rain brings out the romantic in all of us.

Ziptrip soundtrack for: date night. Cue the romance on the drive to a candlelit dinner, or turn up the radio as you lie outside on a blanket and stargaze.

The Grammys fall the day after Valentine’s Day, so it might be a vulnerable time to bring up this popular song about unrequited love. However, the honest lyrics and slow melody make it a top-notch pick for singing in the car.

Ziptrip soundtrack for: driving solo to a friend’s party. Maybe you reluctantly got yourself out of the house at your pal’s insistence, but you secretly put extra effort into your outfit in hopes that your crush will be there. This one’s up to fate.

We all have two types of family: the one we’re given and the one we’ve chosen. Whether you’re close with your relatives or keep stronger ties with friends, appreciate the people by your side through the highs and the lows.

This reflective and sincere collaboration by Wiz Khalifa and Charlie Puth, originally made for the Furious 7 soundtrack after the death of actor Paul Walker, got a nod at the Grammys and some singer love in our poll.

Ziptrip soundtrack for: the way to a family occasion. It’s not exactly a mood lifter, but it’ll have you feeling some feels for loved ones.

Kendrick Lamar made headlines with the most Grammy nominations of any artist this year. His album, To Pimp a Butterfly, has garnered positive reviews from publications of all tastes and has a chance at winning him some trophies this year.

His unique style and explicit lyrics took it to the bottom of the ranks in the sing-along scale, however. This is one for a lively drive and getting a taste of one of the most admired artists of today.

Ziptrip soundtrack for: Friday night. Regardless of the number of statues he earns, Kendrick will take up the energy and assure you that it’s gonna be alright.