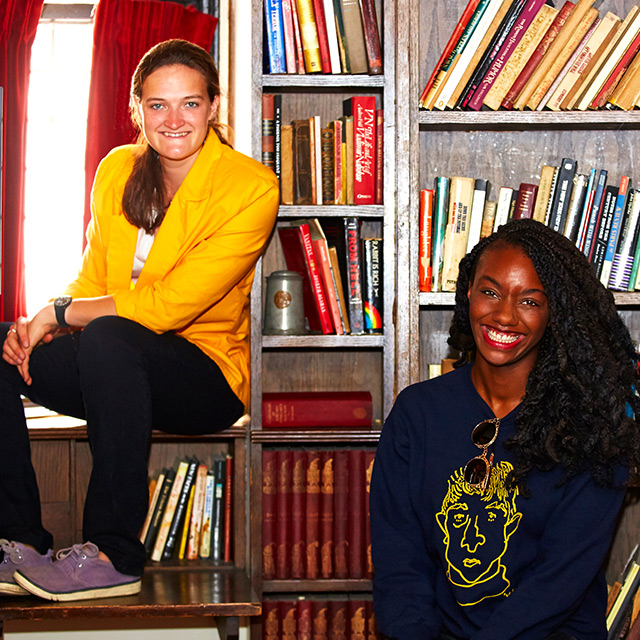 George Foreman Grills & the Harlem Globetrotters. Just Another Day at the Harvard Lampoon.

Beyond funny, the Lampoon is smart. And not just Harvard smart — street smart. That’s right, the hilarious student group has a Zipcar account, and golly, do they know how to use it. Read on to find out about all of their zippin’ shenanigans — and where they’re headed next.

The hilarious Lampoon staff could fit all this into a clown car — but Zipcars are more their speed.

Zipcar: Congrats, Alexis and Ellie, on your well-deserved ascent at the Lampoon! How did you get started?

Alexis: I’ve always been a big “Onion” fan (there were hard copies in Milwaukee, where I’m from), so senior year of high school, I Googled “Harvard humor magazine.” The Lampoon came up, and I thought, ‘That sounds like it would be cool, I should try to get on it.’ I comped [Harvard term for “tried out”] freshman spring and got on.

Ellie: I’d never actually written comedy before the Lampoon, but I was drawn in by the cool literary tradition of the place. The comp is challenging, but it makes you write in different ways, which was appealing.

What’s your favorite stuff to write? What — and who — inspires you?

Ellie: “30 Rock” is my favorite comedy, in any form, of all time. Robert Carlock [a Lampoon editor who went on to win Emmys as a writer and producer for “30 Rock”] has been around here to visit. He’s a great guy, so it was very cool to meet him.

In terms of my comedy style, my strength is physical, and my weakness is wordplay. Usually, when something comes up in everyday life that’s the least bit absurd, I take that and run with it. There are lots of things that come up in course work that you can sense are on the edge of being funny, and then you can run with them from there.

Alexis: I love Tina Fey, Amy Poehler, and Louis C.K. And Kurt Vonnegut was the first author I read and thought, if I can write like anybody, I want to write like him — he’s so serious, funny, dark, and insightful. And I really admire Simon Rich, who’s a Lampoon guy. I was given his book “Ant Farm: And Other Desperate Situations” when comping. A guy on staff told me, “You’re very funny, and there’s something there, but you don’t know how to say it correctly.” And reading that book very much translated to my success.

Ellie and Alexis hold down the fort (err, library) at the historic Lampoon castle, which boasts bookshelves for notable alumni (like Slate writer Ben Blatt).

Does what you are studying relate to comedy, and how do your professors react to your extracurricular pursuit?

Alexis: I’m studying economics and psychology; I like to know a lot about different things. The only thing funny about me in class is my grades. I’m not a class clown or a personality or anything — I’m just trying not to fail!

Ellie: I study organismic and evolutionary biology, so I’m just pursuing different interests, which balance each other out and keep my brain young. When it comes to my professors, I’d say the word is “bemused."

Outside of class, word on the street is you’ve used Zipcars and Zipvans for taking late-night food runs and trips to Boston, picking up plants for the castle, and — our favorite — procuring basketball hoops for a Lampoon exhibition game against the visiting Harlem Globetrotters! Are the legends true?

Ellie: Yes! We also use Zipcar to bring in food for our events (and our George Foreman grill).

Alexis: I’d never heard of Zipcar in Wisconsin in high school; everyone had a car. Now that I’m in a city, Zipcar has made it so convenient to just go wherever I want to go at a drop of the hat — like our Lampoon trip to Mohegan Sun in Connecticut (for those of us who were 21).

You’re both seniors. What’s up next?

Ellie: I’m famously indecisive, but I hope there’s writing in my future, whether comedic or sincere.

Alexis: After graduating this spring, I’m planning to write jokes…some place in America….probably, and will hopefully get paid to do so. It is nerve-wracking, but I’m lucky that my family has been really supportive; they see that I’m taking it seriously and learning how to navigate it.

But for now, I want to leave a legacy to show the new guys and girls what a great place the Lampoon can be. It makes you think of comedy in a serious way, helps you find your voice, and really brings out the best in you. At the same time, we’re a small, private organization, so we’re not looking to impress shareholders or sell so many magazines — we’re just trying to have fun.