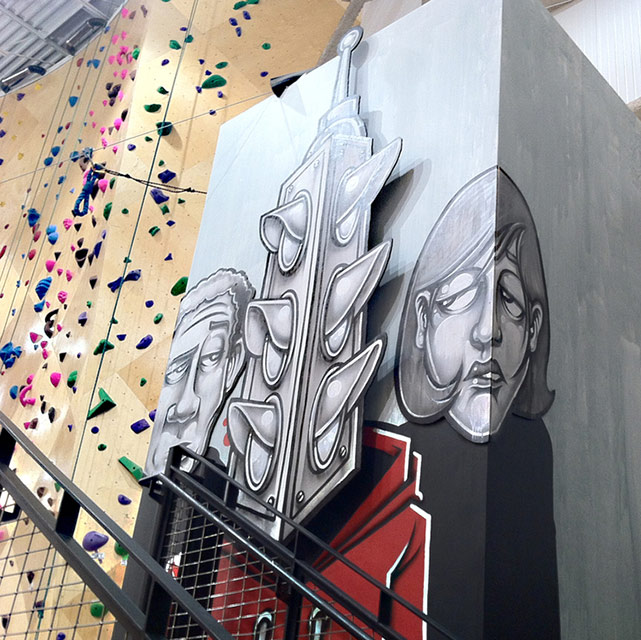 Meet the Chicago Artist Who Made the City His Canvas

Recently Zipcar’s Chicago office called on Lewellen to brighten up our corner of the city. To celebrate, we chatted with him about what street art really means, the challenges of creating it, the way others perceive it, and how graffiti eventually earned him a coveted spot as an instructor at one of the country’s best art schools.

Anthony Lewellen is a multidisciplinary art maker painting the town red (and other colors) in Chicago.

How did you become a professional muralist?

I’ve always been interested in art and drawing since I was a little kid. In my rambunctious teen years, I got into skateboarding, and some years later, got into graffiti.

But then about a year after “bombing” or straight vandalism, it started becoming a medium and I started just drawing more on walls. And what I noticed was that I started to become noticed for the work I was doing, in obscurity. It felt a little Robin Hood-esque because I was doing something illegal, but loved what I was doing.

Then after some interesting circumstances in the 90s, the CTA (Chicago Transit Authority) made an attempt to stop vandalism on transportation. They held a graffiti competition with scholarships to art schools—and my friends and I won the first and second year. So I actually ended up getting a college scholarship out of graffiti! And just this year, I was invited by the School of the Art Institute to come and actually TEACH a class on graffiti.

So things have changed quite a bit. It’s an extension of something I’ve always had a passion to do, and it has actually started to make an impact on people. Also, it makes sense as a kid who grew up in the city, that the city became my canvas, as cliché as it sounds. I was a high-school dropout when I got a scholarship, and then that became the impetus for me to push myself forward. So in a way, graffiti really saved my life.

From studio to sidewalk. Lewellen first sketches a project on paper, then brings it to life using whole building sides as his canvas.

What does it mean to be a muralist in a big city?

I do a combination of murals and studio work. But doing mural work is a completely different experience.

One thing that’s really great is the interaction with people. Being out in the street and painting in a public space makes people very open. Especially in a big city where it’s hard to walk up to people and talk to them, something about this art form makes people feel free to walk up and start a conversation, and give their opinion on what you’re doing. It’s extremely valuable—not just the work, but also demystifying the process of what it means to be an artist in the public like that.

You get a broad spectrum of people who might see that work—people who might never go to a museum and see something like that. I love the democratization of art in that sense. When different types of people walk away knowing something more about my work, or I know more about them—it’s a fantastic experience not just as an artist, but also as a human being.

Lewellan likes the fact that people who don’t visit art museums can still interact with his art, just by walking down the street.

Can you tell us more about this mural for Zipcar?

The design is an urban escape—sort of a playful montage of things that have been reinterpreted through my eyes. Something that’s always been important to me is making an interesting use of the unique spaces that you get to paint outdoors. What’s great about this particular spot is that it’s just north of Lower Wacker Drive—a very dark and scary space (for context, where Batman’s Gotham City chase scenes were filmed). There are lots of dark spaces and shade, with very little sun. So experientially, when people are coming out of this dark and gloomy space and they suddenly see this bright wall, the context has significant impact on how people perceive it. It’s very high energy and cool.

In the design, the traffic light character is trying to explore and go on different adventures throughout the city. One of the things that’s really dominant in street art is to have a signature character, like Hello Kitty. I don’t exactly have one, but if I did, that traffic light guy would probably be my character. It’s sort of a representation of myself, and full of weird symbolic things that I didn’t intentionally put in there.

One thing is that it’s in black and white, even though color is at the core function of a traffic light. And it always has an antenna to send and receive signals, which represents the idea of communication. So here you have this conflicted character that can’t be interpreted in any traditional way. The fact that it’s always in black and white is almost too obvious to mention, but I’m half black and half white, so I’ve never felt culturally white or culturally black. Plus I’m kind of a nerdy loner who didn’t have a cultural identity to fall back on—so this character represents a lot about my life and what it stands for.

When people ask, “What are you?”I’m constantly giving off mixed signals. But if you asked me about that character the very first time I drew it, I never would have been able to tell you. I’ve only figured it out in the last few years, even though that traffic light has always been recurring in my work. So for someone who intentionally tries to never embed symbolism, it’s crazy how much seeps into the work.

The artist admiring the finished product. We dig it, too. Photo by Peter Hinsdale.