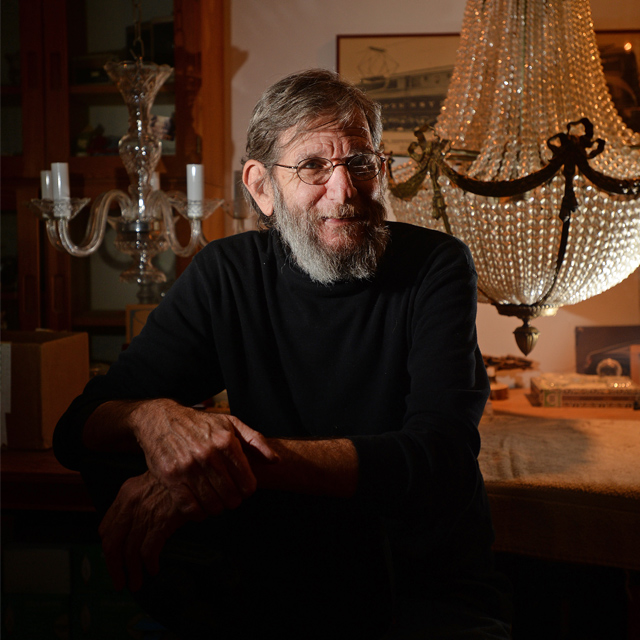 It’s not every day you encounter flamingos or goats in the middle of the city. And yet, if you’ve ever strolled down 11th Street in D.C.’s Shaw neighborhood, you may have caught yourself staring into the large bay window of 1733, where whimsical animal cutouts are illuminated by beautiful, eye-catching chandeliers.

David Toran puts the finishing touches on a restored chandelier in his dining-room-turned-workshop.

The shop window may be enchanting, but the real magic of the locale actually takes place inside in the dining-room-turned-workspace, where David Toran, owner of Chandelier Services Company, has been repairing and restoring a sizable portion of the city’s chandeliers for over 30 years.

ALL IN THE FAMILY

A Philadelphia native, David first learned the trade when his father, a factory rep, hired him to construct light fixtures when they arrived at showrooms. "He knew when the stuff that he sold arrived at the store, so once they did, he would send me in to assemble them and put them up. My father figured out that if he did that, his merchandise would go up first.”

Eventually, the owners of the stores took notice of David’s talents, trained him even further, and hired him to tackle all the other fixtures in the showrooms (always doing his father’s first, of course). At $5 per chandelier, that wasn’t bad walking-around money for a high-school-aged David.

However, after going to school and working a wide variety of jobs after graduation — a greenhouse and a motorcycle business appeared at various times — he eventually landed a job as a train engineer with Amtrak, commuting from New York to Washington, D.C.

It was here that he saw his opportunity.

In D.C., he saw “a concentration of wealth in a very small area” and, as David likes to put it, “Where there is wealth, there are chandeliers.”

Thirty years later, David is the master chandelier craftsman whom hotels like the Mayflower call when they need their more than 75 chandeliers cleaned. And yet, he’s still very much the man who’s lived in the continuously-evolving Shaw neighborhood for all of those 30 years, and deeply understands the importance of community: “It doesn’t matter whether it’s a $12,000 or $1,200 chandelier; they all get treated the same way.”

When I’m working on a fixture that’s 100 years old, I try to imagine what the factory looked like, who were the people who actually made this thing — because they’re pretty much all made by hand.

That means each chandelier is worked on by hand and cleaned with only a mild ammonia rag. As David is quick to point out, “That’s the only way I do it.”

It’s that kind of strong character and diligent work ethic that has helped David’s company gain such a glowing reputation in a niche market that’s often behind the scenes. “Before the internet, this business was built on referrals only,” he says. "No advertising. No yellow pages. None of that.”

He can’t be too nostalgic for the pre-internet days though, as he is swift to admit that it has been a boom for him. “Most people can’t really describe their chandelier over the phone. That meant I would have to physically go to their house just to look at it. With the internet, they just send me a photograph.”

But those times when he does have to travel? “Zipcar is an intricate part of my business,” he explains — and has been for the past seven years. "I have a Zipcar parked right behind my house, and I have an arrangement with them where they put the car that I need back here. In this case, I have a Jeep Compass named Shefalo (which I call Shef), and that car really works for me because of the ladders, equipment, and chandeliers I have to transport."

Colorful tools of the trade; David uses Zipcar (parked right behind his home workspace!) to transport his fragile cargo.

And when it comes to his line of work, safe transport is no joke. “Most folks are attached to their chandeliers. I’ll have a prospective client come in and show me what they have and say, ‘I have a very special sentimental attachment to this’ — which I can usually already tell because they’re holding it like a small child.”

David’s reverence for the prized possessions is equally informed by the chandelier’s historicity itself. “When I’m working on a fixture that’s 100 years old, I try to imagine what the factory looked like, who were the people who actually made this thing — because they’re pretty much all made by hand.”

To David’s dismay, that classic, hands-on approach — one he himself knows well — is sorely lacking in modern chandeliers. “In 3 years, when it burns out, you just throw it out and buy something else. So that heritage gets lost. I’m also seeing more instances where the younger generations don’t want them, and the chandeliers go to auctions.”

Even so, David remains optimistic, as well as committed to passing down his expertise to future talents. “I actually term them ‘apprentices,’ because I am an artisan showing them a skill,” he says, beaming like a proud teacher. "I’ve had seven over the course of 30 years — my daughter included.”