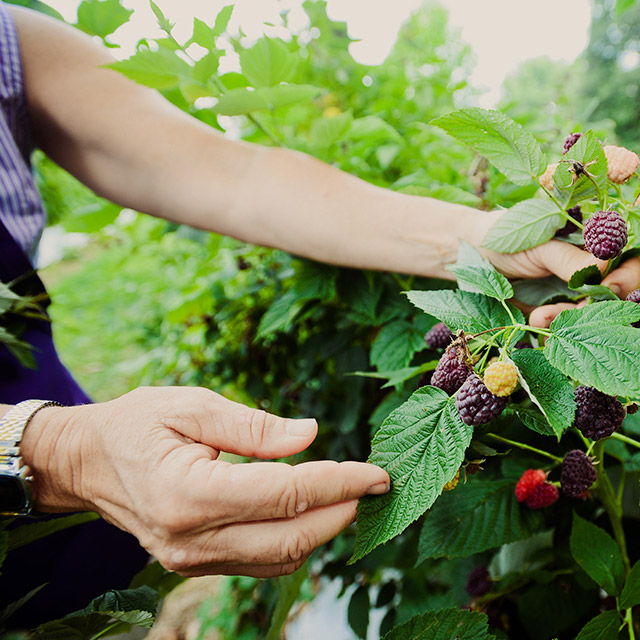 He wants to change how you get your food. He wants to change our broken industrial, global food system, which currently does not provide the majority of people with easy access to healthy food that’s part of a sustainable agricultural system. (Ultimately leading to malnutrition, obesity, and poverty.)

And, most importantly, he wants to change how we view a business’s purpose in society. It’s why “Purpose” is the first P in 4P Foods (followed by People, Planet, and Profit, respectively). And it’s why he believes so strongly in 4P’s new take on the community-supported agriculture (CSA) model.

Tom stands proud in front of bags upon bags of fresh, organic, local produce. (Who wouldn’t?)

FROM A LOCAL FARM TO YOUR TABLE

You may be familiar with similar “farm-to-table” delivery services, but while others stretch the meaning of “organic” or deal with “independent” farmers who happen to be all the way across the country, 4P Foods prides itself on working with only small, local farms. As Tom likes to say, “They’re truly stewards of the land.”

Each week, 4P Foods reaches out to those farms and finds out what is the best stuff coming out of their fields. Then Tom and his team curate what they call a “share” of produce and/or meat and eggs, depending on your pre-selected preference. Most of the produce share is composed of your “garden variety” vegetables—tomatoes, peppers, cucumbers, etc.—but each share also contains one or two more exotic selections. (Have you ever even heard of kohlrabi?) They’ll then send you a list of what you’re getting in your bag that week, along with some tasty recipes, and deliver it directly to your home, apartment, or office.

If 4P sounds like the CSAs you know and love, that’s no coincidence. Tom and his wife had participated in a traditional CSA for about five years before he started 4P Foods. "We found our farm in Frederick and every season we paid them a check and we’d get boxes of food. So in theory it was this wonderful, romantic thing, and it taught me a lot about different kinds of foods.”

Unfortunately, it also showed Tom the operational problems that most traditional CSAs encounter. As he explains, “The logistics were not so great; I had to get on my bike every Tuesday and ride to Capitol Hill, get a box, ride it home. Planning around that was hard.”

And so the gears began to turn.

“I began thinking, ‘Can we take this thing that in theory is really wonderful, and tweak it just a little bit so that people like me and my friends who weren’t signing up for it before (because of the logistics) would be interested?’ And if we can, not only could we scale the amount of good, healthy, local food that’s going into the system, we can also help spur the market towards these small-scare farmers who aren’t making enough money.”

4P Foods is genuine farm-to-table, with only a few hands in the middle.

A STEWARD OF THE LAND

If it isn’t obvious already, Tom is passionate about food. He can talk for 5+ minutes on why you’d probably like celery root if only you knew a good recipe for it. But what makes speaking with him feel so special is that his passion extends well beyond just food to the food industry itself, which he describes as “broken in the vast majority of ways that matter.”

However, he does see a light at the end of the tunnel. “There are these foundational principles of the food system that work,” he points out, “like the scale and the efficiency and being able to move food around thanks to refrigeration and curing. If we could plug in a little more ethics and moral direction, we’d be going in the right direction.”

And that’s where 4P Foods comes in.

Tom and his team know that most people are aware that they should be eating healthier and are aware that the current food system is broken, but that they’re also too busy to do anything about it. “Everyone has jobs and lives,” he admits.

That’s why he wants to do the fighting for them. When he recruits people to sign up for 4P Foods, it’s usually not just because of the delicious food (though that’s certainly a bonus), but also it's, as Tom himself puts it, "because collectively we’re going to fight that good fight by creating a new market, we’re lobbying on the hill, we’re going to use our collective voice to do something about it."

That fight—and his solutions—began when Tom first started 4P Foods. In those early days, Tom was running around town during the day trying to get people to sign up, but his warehouse was 65 miles away in Elkwood, Virginia. He explains, “So week one, it was ‘Put the deliveries in the back of a Kia Sorrento Zipcar and drive all over town doing deliveries between 2 and 5.’” Several weeks later, they scaled up to a Honda CR-V. By their third month, they had so many customers that the CR-V wasn’t big enough, so they upgraded to a Zipvan. Finally, the business hit a point (hundreds of customers!) where they had to actually own a vehicle—but that meant getting a loan. Fortunately, because Tom was able to show his organization’s business viability, thanks to Zipcar, he was approved.

Yet Zipcar still remains an important part of 4P’s operations. "Zipcar has been this flex option,” Tom says. "Before we bought our second van, we would use Zipcar as an interim option; that’s been a great luxury for us. And I still use it every week, as my commuter vehicle, and for when I’m going around to visit farms.”

As the number of deliveries grows, so does the size of their vehicle. 4P loads up a van, headed right to someone’s (lucky) doorstep.

LOOKING TO NEXT SEASON

4P Foods is obviously still growing (no pun intended), and Tom already has higher aspirations for it. And while he hopes that those people who can’t make it to the farmers market on Sundays now have a more practical option, he’s set his sights even bigger: "If we can do for local, ethical food what Whole Foods has done for the awareness of organic, we’ll be winning. I think we can do it without the brick and mortar; I think we can change the way we think about food and tell the stories of great people.”