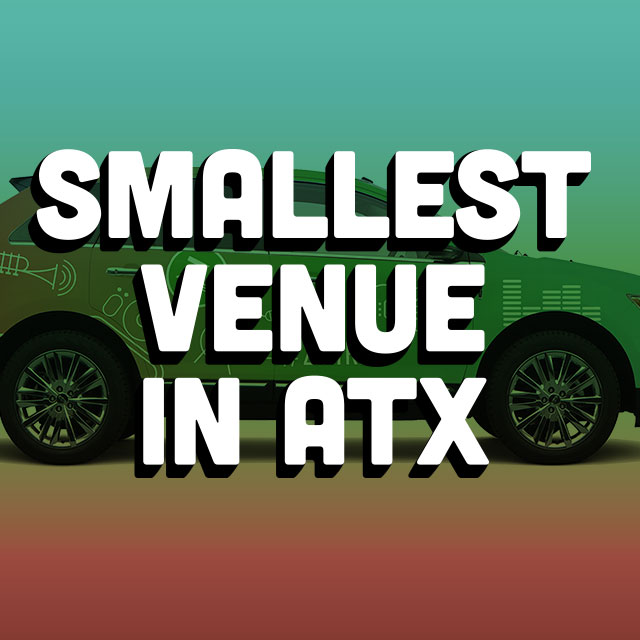 With our own VP of marketing on a tech panel at SXSW, it was only fitting that we’d stick around Austin (one of Zipcar’s home cities) to offer up even more cool events for locals and visitors alike during one of the largest—and coolest—festivals in the world.

The plan: Five bands + one cushy Zipcar + lots of lucky music fans = front-row seats to an intimate, exclusive musical experience in the smallest venue in Austin. Here’s a peek at the artists (and listeners!) who made this super-special event happen.

Stripped back, vulnerable, and quintessentially quirky-cool is the best way we can describe guitarist, singer, and songwriter Greta Kline—and her friend Lauren Martin on back-up vocals—who comprised a duo version of the band Frankie Cosmos for their many SXSW performances. Their show with us was definitely the most up-close and personal, and led to some hilarious, laidback banter and bonding (and, of course, beautiful, intimate tune-age) with the lucky listeners.

This band of five bearded locals served up moving, soulful Americana, starting with a rootsy rehearsal on the sidewalk of 4th and Congress St., which had admiring crowds gathering before the real performance even started. With an accordion and acoustic guitars aplenty—and the largest line-up of all our event’s bands—they were the tightest squeeze for sure. Fortunately, an open hatchback trunk and a gorgeous Austin day went together marvelously—and the fans inside agreed.

At just 15 and 18, the brother and sister at the heart of Charlie Belle (plus their good friend Alex Freeman on bass) are young in years, but deep in talent. (They did start making music when Jendayi Bonds [guitar, vocals] was 7 and her brother Gyasi [drums, vocals] was only 4, after all.) Poppy, insightful, and refreshing as all get out, this local—and in-demand—group played a whole pile of well-earned SX shows. Even just a quick listen and it’s abundantly clear why. Charlie Belle’s star is definitely on the rise, and the fans who enjoyed private songs with them now know this personally.

Mixing up alt-country grooves that were both sweet and atmospheric, Escondido proved not only talented performers, but charming and hilarious seatmates, too. (Fun, insider fact: They track down photos that fans have taken of them performing, narrow in on ones with goofy expressions [like “bass face”], zoom in, and text them to each other for kicks. Ahh, band antics.)

On a more serious note, this group is seriously on the rise. Case in point: One of their songs was recently on an episode of “Nashville”—their beloved hometown. With their latest album out just last month, they’re now headed on a major U.S. tour. If you didn’t catch them at our micro-show in Austin—and the video of their performance whet your whistle—you’ll definitely want to keep Escondido on your radar.

Hailing from Baltimore—and performing at an upcoming “Zipsongs” event at our Baltimore office—Great American Canyon Band (or GACB, for short) brought a timeless, indie-folk vibe that immediately transported the listeners far from the busy-ness and overstim of SX. Equally cinematic and sprawling—while simultaneously intimate, catchy, and dreamy—this stylish group brought a uniquely sophisticated sensibility that’s not to be overlooked.

TEXT AND PHOTOS BY ALLISON TANENHAUS // GRAPHIC BY STEPHANIE QUINONES-MILLET