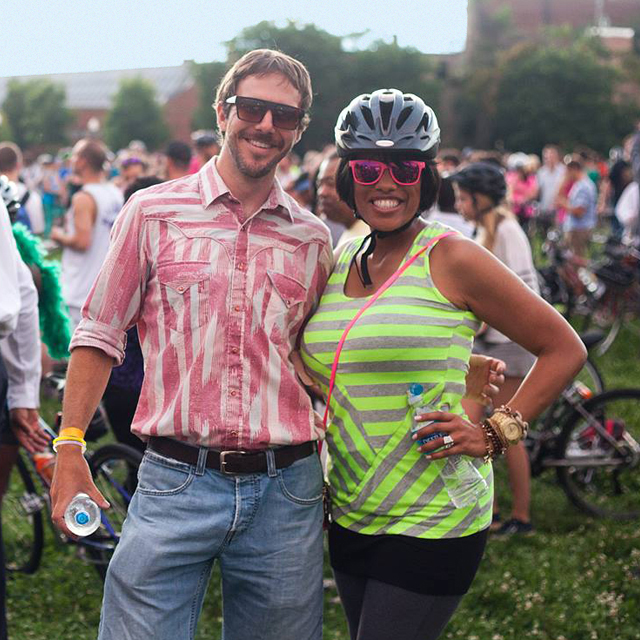 Tim Barnett is a conductor of organized chaos. He is the founder of Baltimore Bike Party, a monthly organized ride through Baltimore that allows cyclists to gather en masse, dress up in ridiculous costumes, ride together, and end the night with a stellar after party. Tim also happens to be a proud member of Zipcar’s Baltimore team, using his bike to get around town in order to help make sure everything is running smoothly in Charm City.

“The initial idea was to get enough bikers together in one space to demand attention,” Tim explains in discussing Bike Party’s origins. Tim took the idea from Critical Mass, an organized bike ride started back in San Francisco about 20 years ago that was centered on bike rights, and which eventually spread nationwide. As the rides reached places like Baltimore, its semi-anarchistic leanings devolved into violence and hurt the reputation of the brand. “Apparently, Critical Mass got to a point where the rides literally ended in fistfights with police,” he describes. Eventually, the organized ride couldn't sustain itself and it disappeared.

Having moved to Baltimore in 2006 from Texas, Tim took what he appreciated from successful, more peaceful Critical Mass rides and began to form his own organization. “I took the things I thought Baltimore needed and then added my own spin in terms of what would function best for this city.” Tim implemented rules that cater towards Baltimore’s bike scene, including the Barnett original “3 R’s”: Ride, Respect, and Revelry. He says the ride and revelry part are self-explanatory, but expounds passionately on third, most crucial tenant: “If you want to have respect you have to give respect. And beyond that, it’s about putting out good vibes.”

Respect is what keeps Bike Party wholesome and in good standing with the local police. It’s also what makes the bike parties such an incredible celebration. Nearly 2,000 riders come out each month dressed in accordance with the event’s theme. Past events have included a Beach Party and a tribute to the Rad 80’s. During last month’s Brew Ha-Ha, Union Craft Brewery kept the beer flowing through 18 taps for reveling riders to enjoy.  A grinning Tim admits, “The after-party element is important. I want it to be the thing you’re going to on a Friday night.” But Baltimore Bike Party has a greater mission than just bicycle awareness and after parties.

As Tim himself says, “That’s just one piece of the puzzle.”The deeper mission behind Baltimore Bike Party is to expose residents to the beauty of all parts of Baltimore and to the camaraderie that is an essential aspect of each ride. Tim details, “One of the unofficial mottos I’ve had is that I want people to love biking more and I want people to love Baltimore more.” He addresses the racial, socioeconomic divisions that exist in the city, and he believes that biking and Bike Party can help break them down. He shuns the idea of ignoring areas of the city that many might not feel safe or comfortable in when planning the rides. “The idea is to create that opportunity to share a little joy and a little humanity with people you may not come in contact with on an everyday basis.”