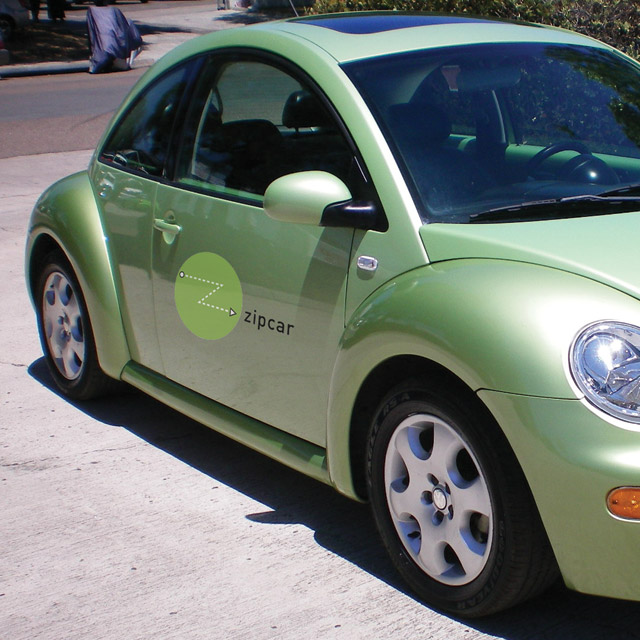 Zipcar’s been taking it to the streets since 2000, when our very first car—a lime green VW bug named Betsy, in Cambridge, Massachusetts—was accessed via a key hidden on our founder’s porch. Employees went on to name Betsy’s 11 forthcoming, identical buddies, and they also printed the cars’ name tags from the office printer. (The first time, the labels all came out backwards. The second time, the sheet of stickers got stuck in the printer and almost caused a fire. We figured it out eventually.)

While our technology has since advanced by leaps and bounds (gone are the hidden keys; now you unlock with your Zipcard—or even your phone! so fancy), that personal, quirky touch of naming our cars has remained. Not only does naming cars make it easier for members to find them, it’s also, well…fun! But with our current roster of 12,000 cars (and counting), devising fresh monikers—without repeating any in our database—becomes its own unique challenge. Read on to learn how a Zipcar gets its identity…and snag some bonus behind-the-scenes secrets, too.

When it snows, we shovel out the cars—not shovel *with* the cars. Minor difference.

Although some of our favorite names are truly oddball (“Clownfish,” “Zamboni,” “BMW Bigfoot,” “Pacman,” “JazzHands,” “Platypus,” “Hodgepodge,” “MacGyver,” “Hokeypokey,” and “Pancake”—just to name a few), sometimes they’re based on what’s right in front of us. In wintry Minneapolis–St. Paul, cars boasts chill names like “Snowball,” “Icecap,” “Frostnip,” “Hibernate,” and “Flake.” Brrrr-illiant!

Despite the fluffy white stuff’s inspirational nature, when it comes to driving safely (which we’re all behind), snowstorms pose a danger. But we can’t all just come to standstill and hibernate all season long. (Wait, can we? No.)

So when it snows (in Minneapolis–St. Paul, or your neck of the woods), we shovel. Originally, it was employees from local offices, but eventually, we asked our fleet teams (y’know, the folks who make sure Zipcars look and operate great) to heave ho, too. We still do keep plastic shovels in the cars, along with snow brushes and washer fluid, so you can top off our efforts as the flakes continue to fall.

When snow melts, it makes shoveling moot—but new issues emerge. Case in point: Spring breakers have, on more than one occasion, parked a Zipcar in Daytona Beach during low tide…and then regretted it deeply come high tide. We recently lost a pickup truck in Seattle for this very reason—until low tide, that is, when we towed it out.

We get by with a little help from our famous friends—in Aurora, Illinois, and beyond.

Zipcars have, on occasion, received a sunnier, star treatment. Like in 2014, when an episode of South Park spoofed Matthew McConaughey’s Lincoln commercials, and had the actor driving a Zipcar in a “Wacky Races” course. Honored by the animated likeness, we immediately named a Lincoln MKX “McConaughey” (and only had to Google the spelling once!).

Other star-studded names include a jet black BMW 528iX named “Darthvader,” and—in conjunction with our 2015 Santa’s Sleigh stunt—eight cars named after reindeer. (They’re celebs—right?) And our own Mini Moxie shone on the silver screen when it starred in an Apple ad for the introduction of the Zipcar iPhone app.

That local touch extends beyond campus and into Zipcar cities, too. (Sometimes, it’s even the whole dang country! In Philadelphia in 2008, members could "vote" by reserving their candidate's namesake: Mini McCain, BMW Barack, and Honda Hillary. As in life, Obama won.)

When we launch in new cities, we always name a car—typically the one that lives closest to city hall—after the mayor who ushered us in. (The best part: we don’t reveal the name until the ribbon-cutting ceremony, for the ultimate surprise. So keep mum around your mayor; we want to keep this on the down low.) When we have more than one car making its debut in a new locale, we invite the government officials we partner with to suggest names themselves, which are often based on local streets or landmarks, to honor their city from an insider’s POV.

One tasty example: In Milwaukee, we named a vehicle “Cream Puff” in honor of the Wisconsin State Fair, whose official food is the cream puff—and even left free State Fair tickets in the car as a member giveaway. In Minneapolis–St. Paul, we’ve honored local celebrities, like “Justin” (Justin Morenau from the Twins), “Garrison” (Garrison Keillor), “Fitzgerald” (F. Scott Fitzgerald), and “Paisley” (in honor of Prince and his Paisley Park studio). In Beantown, there’s a sporty Honda Civic Hybrid “Coach Parker,” after Boston University’s hockey coach Jack Parker. And in Chicago, “Scion XT Deep Dish” is a delicious favorite. (Please don’t eat the car, though.)

Of course, our members always get a say, too. When we set up shop at an apartment complex, we always ask the residents to weigh in. Those lucky ducks get to submit their five favorite names, from which a winner is chosen. One recent fave: “Bucky,” named after the local neighborhood of Buckhead in Atlanta. We also hold naming contests for various cities on social media from time to time, so Zipsters like you can weigh in, too. Be sure to follow us for the next heads up!

Name a more iconic duo. (We did! We just went with some that had…less dramatic endings.)

What pairs well with a Zipcar? Another Zipcar! That’s why some of our top Zipcar names have been dynamic duos—like Spaghetti and Meatball, parked next to The Old Spaghetti Factory restaurant in Portland, Oregon. (Meatball has since been defleeted—vegetarians rejoice!) We also partnered with Nike in Portland, and the fast-footed company chose Victory and Stride for the vehicles parked on their campus. (You can’t sprint everywhere all the time, it seems.) Additionally athletic: the tag team of “Nissan Altima Soup” and “Nissan Sentra Bowl” for the 2016 Super Bowl. And after late-night funnyman Stephen Colbert’s faux presidential run in 2008, we named two side-by-side cars “Stephen” and “Colbert.” Because America.

Lastly, while not technically a pair, we once renamed a Mini “I Do” after a member requested the car for their wedding. (Actually, that sounds like a spectacular kind of pairing.)

Naming cars after Zipcar employees: the best high-fives we could give to ourselves.

Perks of the Job

As much fun as naming cars is for Zipcar employees, it’s even more fun to name them after…each other. Alex Tran is one of our most tenured employees, so we named not one, but TWO, cars after him: “A3 Alex” and “Tacoma Tran.” Dan Curtin, another true blue employee, has two “Curtins”: one’s a Honda Civic, and the other’s a Honda CRV.

We also named a car “Audi Q5 Scotty G.” after our former CEO, Scott Griffith, and commemorated former Zipcar presidents Mark Norman and Kaye Ceille (“Kaye C.”), as well. Boston employee Kristen Cramer was honored with the “Cramah.” (Note the Boston accent.) And one of our trusty college interns lucked out, when we named the car closest to his campus after his emerging rap persona: “T-Fly.”

While most of the cars mentioned throughout this article are available for members to drive, there’s one that definitely isn’t. At Zipcar HQ, our esteemed engineers test out all kinds of tech development wizardry on their pincushion car: “Scientist.” Which means there’s only more Zipcar tech—and naming—magic to come.

What’s your favorite Zipcar name? What would you name a Zipcar near you? Tell us your car name stories in the comments below.