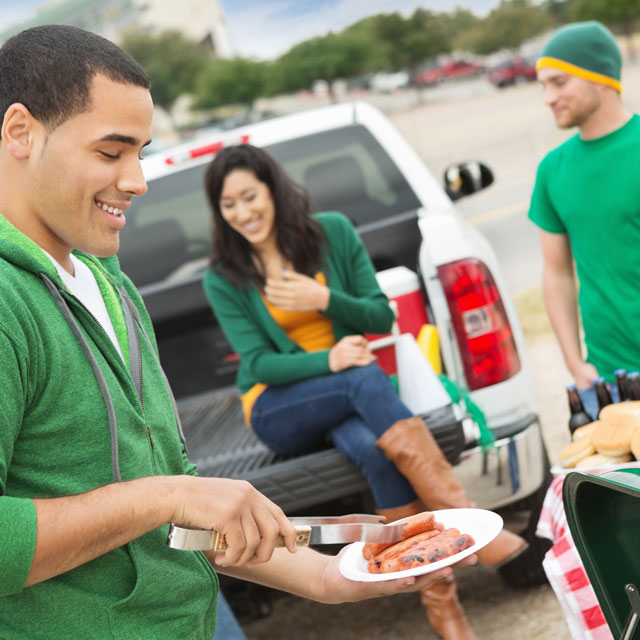 How to Throw a Sustainable Tailgate

When you’re heading out to watch your favorite baseball/football/pickleball team, ‘sustainable’ is probably the last word that comes to mind. But big get-togethers tend to equal big amounts of waste, much of which is easily avoidable.

Rather than leaving behind stacks of solo cups, heaps of chicken wings and a pile of disposable BBQ grills, take a few simple steps to make your game-day gathering as green as possible.

Steering away from disposable containers is one simple way to throw a greener tailgate.

Forget charcoal-guzzling grills and plastic forks. Natural gas grills burn cleaner, and also mean you can get everything sizzling super-fast. And, rather than stacks of paper plates and Solo cups, pack reusable stuff. You know, like real cups and plates. They can be plastic or glass (depending on how rowdy/clumsy your crowd is)—just stuff you can wash up rather than throwing in the landfill. You can easily find compostable plates, cups and cutlery, too.

Cheers to an eco-friendly tailgate (with proper glasses rather than plastic cups).

Have a recycling plan

Pack containers in your car for recycling and composting. The parking lot might have bins for separating plastic, paper and food waste, in which case you can just put everything in bags to empty out at the end. Otherwise, buckets or plastic boxes with lids work well. If your tailgate happens to be in your own backyard, it’s even easier to do. Just put containers out with clear labels on, so everyone knows what goes where. Meat bones, like chicken wings and legs, should ideally go in a separate composting system.

Make use of on-site facilities, or take some containers to separate out your recyclables.

It’s hard to judge how much food you’ll get through when there’s a big group. But, whatever you do, don’t let those beautiful salads, sides and jugs of fresh lemonade go to waste. Just wrap or pack them back up for later and distribute among the group after the game. If you really want to plan ahead, get some flatbreads or wraps that you can fill with the leftovers later on. Grilled meat and veggies taste better cold, anyway.

Don’t throw all that leftover BBQ and veggies in the bin. Think how delicious they’ll taste later on.

Make it a Zip-line

If you’re a Zipcar member, then you’re already on your way to a more sustainable tailgate. Use the Zipcar app to find your nearest vehicle, load it up with all the necessary goodies (and a few of your closest friends) and head to the stadium parking lot. If there’s a big group of you going to the game, Zipcars come in many larger sizes like SUV’s and even mini-vans. You only pay for the time you reserve the car—which means more money to spend on snacks.

OK, so the term ‘tailgate’ comes from the fact these game day get-togethers are traditionally centered around the trunks of cars and wagons. But, really, it’s all about being with your favorite people, eating grilled food and having fun. So there’s no reason you can’t throw an epic tailgate in the comfort of your home, especially if you’re watching the game on TV.

You don’t actually need to tailgate to throw a tailgate. Have a party indoors, instead.

It sounds obvious, but it can be easy to forget simple things. Like turning off your car engine while idling, for example, or choosing food from local sources to reduce your carbon footprint. Pack reusable water containers that can be refilled, rather than a load of plastic bottles. It all adds up. Knowing you’ve done your bit will also help you chill out and enjoy every moment of your tailgate—and the game (hopefully).