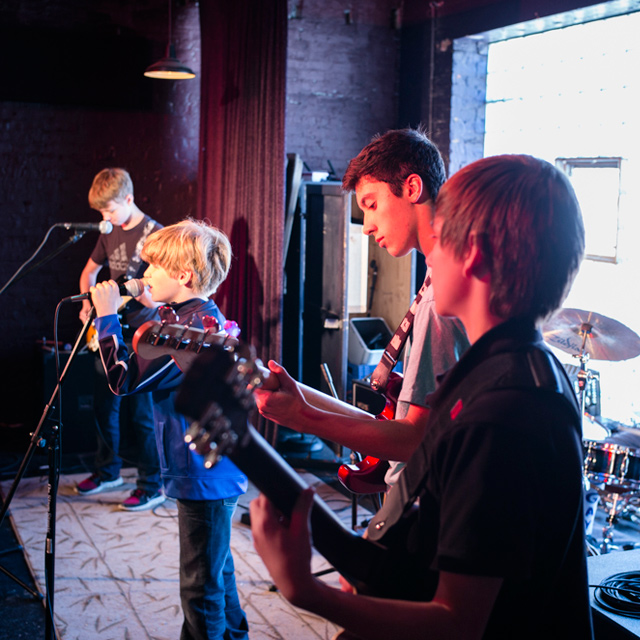 When most people hear “School of Rock,” they think of the 2003 Jack Black movie. But the real School of Rock isn’t just one guy, and it isn’t just one movie — it’s actually more than 120 schools, 17,000 kids, and an empowering, life-changing endeavor that started in 2002.

Inspired by the legions of up-and-coming young rockers ages 7 to 18 the school helps to foster, we chatted with Adam Mackintosh, a singer/songwriter who’s performed in 500 concerts, including a recent gig at SXSW with his band The Last Dancers. And, oh yeah — he also happens to be the Regional Manager of both the Chicago and Glen Ellyn School of Rock locations.

Young students master a multitude of instruments at the Chicago School of Rock (one of the largest and oldest locations), thanks to their musician mentors.

Zipcar: How is the School of Rock different from other music programs?

Adam: We provide a unique learning environment that’s the very opposite of the traditional “you’re gonna practice this scale for five or six years and then maybe play with someone.”

Ultimately we’re a performance program, which is where the extremely accelerated learning happens. With School of Rock, students can play 500 songs on stage over the course of three years — and there’s so much opportunity beyond that. They open for Ringo Starr at the Hard Rock Café or perform on national TV on Brand X with Russell Brand and Dancing With The Stars — all before they’re 18. Our students aren’t just learning their instruments from accomplished, working musicians, they’re constantly applying them in a real world environment.

How does it work?

The students come in twice a week, once for a lesson and then once for rehearsal to play with their friends. But that’s just where it starts. They’re practicing at home, they’re playing with friends who have drum sets and amps in their garages or basements, they’re singing at parties for their parents’ friends. One family enrolled and three months later, the dad came and told me that over the weekend, his son didn’t have the Xbox on at all, he just practiced AC/DC for hours. Once the kids get the bug, they’re unstoppable!

Backing up a little, how do the students get started?

The number one statement spoken by parents who come through our doors is, “I wish I had this when I was a kid.” Other times, a kid really wants to learn a particular instrument and won’t stop asking! So, in a way, parents get to live vicariously through their kids, who have this rock and roll experience.

Other times, parents want music education for their kids, because it’s been thrown by the wayside at their regular schools. Sometimes parents tell me, “I cannot get my child to stop banging on things, and as much as it drives me up the wall, oddly it’s in time — can you help me?” And sometimes we’ll have a kid who’s into Goth, their parents are completely at a loss, but a kid on our poster looks like how their child is dressed, so they come here.

How do parents react to their children becoming rock stars in training?

Once they’re here, parents realize there are so many other students in their kids’ age range with common interests who want to excel, and they’re really happy they found a safe, positive environment. That’s something that as a parent you just desperately want for your child — a place where they can really be themselves, have a lot of friends, and feel like it’s their home.

After learning fundamentals from their teachers, School of Rock students team up with friends to get stage-ready.

What’s your favorite part of working at the School of Rock?

My favorite moments are when things fall apart — when a song goes completely sideways on stage and without anyone’s directional help, a bunch of 10-, 11-, or 12-year-olds figure it out and get the song back together. That could be amps that blow up, guitars that break — or mic stands that fall offstage when the singer is supposed to be playing keyboards, but that singer is now stuck holding a mic, so the tambourine player goes over to hold the mic and help.

These aren’t skills we taught them; they figure it out live, on the spot. That trust, fearlessness, and the presence of mind for kids that young, while live on stage in front of people, consistently blows my mind.

A summer camp student loads up his gear to head out to a gig via Zipvan.

Speaking of live shows, word on the street is the School of Rock uses Zipvans to get to gigs and back. Is this true?

Absolutely! Zipvans are great and I’m a huge fan of them. I can have the whole staff have their own cards and access, so it’s part of the responsibilities of putting together a seasoned show. So on the checklist of “does a guitar player know the guitar solo?” is also “did I reserve my Zipvan?”

With other companies, they’d say, “We have a van,” and then you get there and they say, “Oh, we meant maybe we have a van.” Meanwhile, I’ve got 30 families waiting for me, we can’t do “maybe” — the show must go on! With Zipvan, those problems and anxieties are just eliminated from the equation.

After just one week at summer camp, these kids are on stage at a real venue, rocking out to Led Zeppelin.

Glad we could help! After all of these great experiences, what happens when it’s time for the students to move on?

The students who graduate from School of Rock leave with a whole set of social skills you just don’t find in high school — not to mention a giant social network of thousands of fellow School of Rock students across the world. And, of course, they can play the heck out of their instruments, so they go everywhere, from accelerated music programs like Berklee School of Music to Interlochen, and often find themselves in national touring acts, like the recent grads in Dr. Dog and The Skins.

With years of dedicated practice, these guys could become School of Rock All Stars and play Lollapalooza or the Warped Tour. (Stay tuned!)

There’s a small percentage who become famous musicians, and then there are students who go on to become engineers. I always say to parents, “Your kid may become a rock star or a rocket scientist. But they’re definitely going to be a great student and a great young person when they come out of here.”

Is this story music to your ears?  Catch our videos featuring Atlanta drummer Jeremy Cole and Vancouver performance series The Green Couch Sessions.