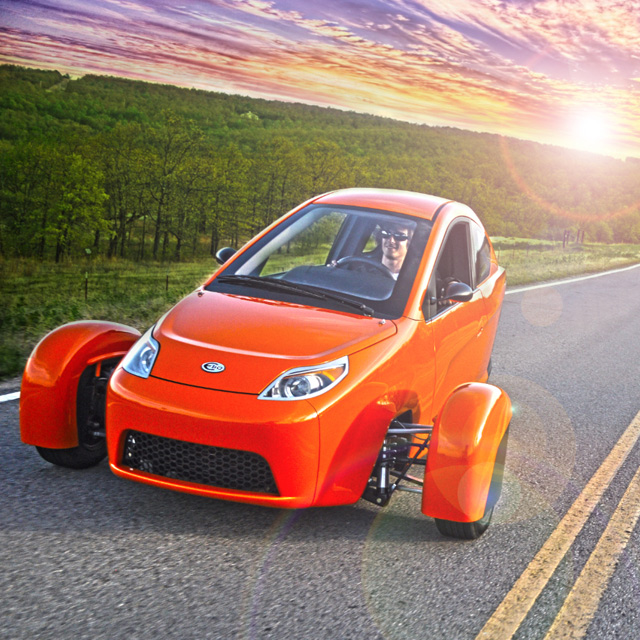 Will Your Next Car Be a Motorcycle? Meet The Elio.

At half the weight and at least double the MPG of a normal sedan, the Elio is a serious game-changer. Photo Courtesy of Elio Motors.

Despite the success of car sharing and more pedestrian-friendly urban development, we know that cities are still being designed with cars in mind. Instead of pushing against the tide, Paul Elio had another idea: redesign cars to better suit city streets.

Meet the Elio, a three-wheeled, two-seater vehicle that sells for the wow-I-can-actually-afford-that price of $6,800. On top of being half the weight of a normal sedan while still providing all the normal amenities (AC, power windows, stereo, etc.), the Elio redefines the very notion of a car. It’s technically a motorcycle at three wheels, but offers security with three airbags, and fits a carry-on-sized suitcase in the trunk (which doubles in space with the rear seat folded down). The real kicker? At 84-mpg, you could drive 692 miles on one tank—that’s the distance from Detroit to New York City, or San Francisco to Portland. We’re already packing for the road trip.

This orange beauty (also available in six other candy-colored hues) is set for a late 2015 release. While it may look like a car straight out of the future (isn’t that the idea?), drivers aren’t shy to agree that this could be the vehicle of tomorrow’s highways. The Elio has over 25,000 reservations already, with numbers looking to increase with time.

Through innovation that straddles the line between car ownership and sustainability, this could have a big impact on the trajectory of city transportation. As the sharing economy continues to increase efficiency and save resources, modifications to the realm of personal ownership that achieve those same end goals can have a doubled impact. Sounds like a win-win to us.