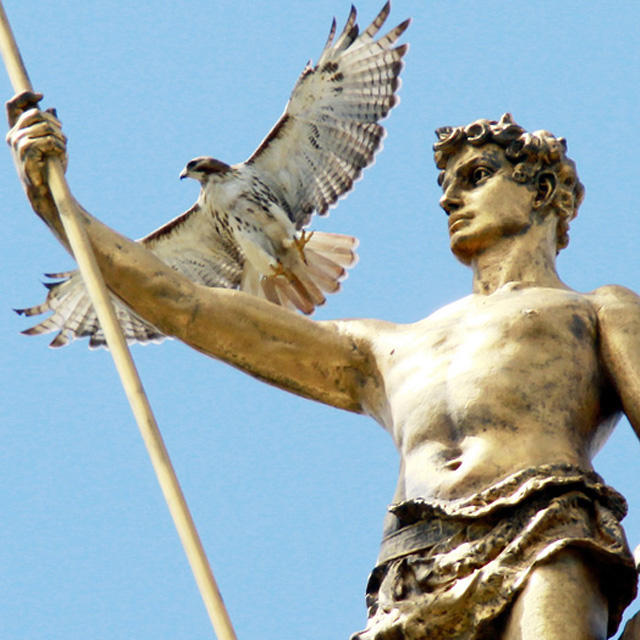 Just Flew In From the Arctic and Boy, Are My Wings Tired

To a red-tailed hawk, the streets of Providence look like an all-you-can-eat buffet. Rats, squirrels, and mmm, pigeons. A decaying habitat and lack of food has driven more large birds like hawks and owls to fly south in search of prey. The plentiful supply of food provided by urban centers has given Peter Green, a Zipster in Providence, a new passion—photographing wildlife, right in the middle of the city.

We recently took some time with Peter to get a bird’s eye view of his adventures.

Peter Green is a Zipster, a graphic designer, and a wildlife photographer.

Zipcar: Why did you start photographing raptors?

Peter: I moved to Downtown Providence in 2008, and out my window I noticed a pigeon flying up to the top of a bank building. One day I pulled out a telescope and looked up—it wasn’t a pigeon; it was a Peregrine Falcon eating a pigeon. And that inspired my love for urban raptors. I got a camera and kept it with me. One day I ran into a red-tailed hawk right in Downtown Providence devouring a pigeon.

Yeah! It was amazing. I felt like I had stepped into the Discovery Channel.

A red-tailed hawk in Downtown Providence snacks on his lunch—fresh pigeon.

What are falcons and hawks doing in Downtown Providence?

This hawk was hunting. In the winter, they’re very hungry and there’s an unlimited supply of pigeons in the city.

The Peregrine Falcon that started it all. Perching on buildings in Downtown Providence.

What do you do with the photographs you’ve taken?

My pictures have run in the Providence Journal. I put them on my blog. I also convinced the Audubon Society to let me accompany them to the top of a bank to photograph baby falcons and put together an exhibit. I contacted Senator Whitehouse from Rhode Island (I heard he was a fan of the falcons) and he borrowed some pictures for his office. It’s just snowballed. It’s been a lot of fun. At 35 years old, I found a passion that I love.

Baby falcons on the bank building across from Peter’s apartment. Part of his Audubon Society exhibit.

I’m at my desk all day as a graphic designer, so it’s great for me to have this hobby to take a walk around the city and do stuff. I volunteer occasionally at the Born to Be Wild Nature Center. They have these tiny, adorable owls, the size of your hand. (They get hit by cars unfortunately.) If they’re able to be released after rehab, I photograph the release.

Injured baby owls heal at the wildlife rehab center, Born to Be Wild.

Do you think climate change has anything to do with more birds of prey in urban centers?

It’s possible with the snowy owl. I recently photographed the release of one believed to have traveled 3,000 miles from the Arctic, which is very bizarre. These owls nest on the ground on flat land. They fly low and hunt low. That’s why they wind up at airports a lot because it looks like the tundra. If a rat has to run across the runway, it’s totally exposed vs. in a field where it can hide in grass.

Peter was able to photograph the release of a rehabilitated snowy owl—very far from his Arctic home.

How do other people react to seeing raptors Downtown?

People often see me taking pictures and they stop and look up at what I’m shooting and they thank me because they never would have noticed that there was a hawk right above them. Sometimes I do tours with inner-city school kids. They don’t know there’s wildlife downtown. So I take them and show them this is where the falcon lives, this is where you can see a hawk, and some fun stuff like that.

Are there websites to find out about recent sightings of interesting birds in my area?

Ebird.com, but technology in the birding world has been causing debates. People see a bird and report its whereabouts online for other people to check out and go see. But if there’s a snowy owl in Providence, it’s already stressed. It just flew 3,000 miles from the Arctic and doesn’t need 30 photographers running after it. I personally know to keep my distance, but not everyone does.

How do you use Zipcar in your urban raptor photo shoots?

I don’t own a car. I normally walk around or ride my bike, so I originally signed up for Zipcar so I could get out of the city to photograph a screech owl. It was springtime and I knew she had babies so I would take the car out and hear the mom singing to her babies in the tree—just me alone with the owls. It was pretty neat. Ultimately I got a great series that included three babies peeking out of the hole. There’s not a lot of money in it, but it’s what I love to do.

Mama screech owl keeps a close eye on Peter as he films her babies.